Watching 'Frozen' With My Daughters: Disability as Superpower and the Power of Sister Love

My kids are only 2, so I’m still not fully in the loop of kid-culture. “Frozen” largely stayed off my radar during its run in theaters, because I am NOT crazy enough to take these two to a movie in a theater yet, and I didn’t even see trailers because we don’t have cable and they don’t show ads for movies on Hulu very often. I’d see posts in my social media feeds from moms of older kids complaining about watching it for the umpteenth time or having the songs stuck in their heads, and I even saw a few videos shared that related to the film, like those self-declared good-looking parents lipsynching. (Tip: unless you’re Derek Zoolander, never talk about how good-looking you are.)

All that said, the other day we bought “Frozen” and tried to watch it as a family. The girls had a long, late nap that day, so we were looking for a low-key evening activity. And I’d been kind of curious about a movie I heard was about two sisters — I have a sister and am raising a pair of sisters and YAY SISTERHOOD, you know? I popped popcorn, and all four of us snuggled on the couch, and we pressed play. Elmo? the girls asked. And kept asking. Basically, through the entire movie they wanted to know where the heck Elmo was, and if Elmo wasn’t in this movie, why were we watching it at all? We didn’t even finish before putting them to bed.

But I caught enough of the movie to dig a fairly feminist message of sisterhood and familial love being as strong and important as romantic love, and I knew I wanted to really watch the film, despite my distaste for Olaf the Abominably Annoying Snowman. So the other day when the girls were napping, we watched Frozen again. And upon this viewing, I noticed something different. I started to see a disability narrative where I hadn’t seen one the first time, perhaps because I was distracted by all the demands for Elmo. As I watched this time, I started wondering which of my girls was Anna and which girl was Elsa, the same way my sister and I used to say, “I’M BELLE!” back before anyone needed a Buzzfeed Quiz to identify with a fictional character.

And it occurred to me, my little white-blond Claire is Elsa — not just because of the hair, either, but because of Spina Bifida, too. Like Elsa, Claire was born with something that makes her different. Something that has risked her life, something that many might think she should be ashamed of or at least try to conceal and minimize as much as possible. Like Elsa, Claire will have to learn how to live with this difference and will perhaps grapple with it, struggle against it, though I hope she will not. I hope she’ll accept her whole self as a whole person, and I want her to see her disability as just another way of being a person in the world, but I do know that like any other part of ourselves that makes us different, she may struggle a bit before she decides how she feels. Elsa, for much of the story, has the idea that her difference is something that must be hidden, that is dangerous to others, that is a barrier to her participation in both family and work life. Notably, this is something she is taught, as at first she plays around with her powers and sees them as a way to connect with her sister. I never want Claire to get the idea that her difference is something to hide. “Conceal, don’t feel” could basically be summed up as the opposite to my philosophy on identity and self.

I admit that I worry that difference will come between Claire and Etta, that one will resent the other either for being able-bodied or for requiring more care and attention, just like Elsa’s powers come between her and Anna. I also must say that I hope they realize the bonds of sisterhood and family love draw them closer than any difference could ever separate them.

Maybe one day, when my girls are a little less Elmo-obsessed, they will be able to watch and identify with Frozen. I hope they don’t get caught up in who has power or who is different. Instead, I hope they understand that for both of them, able-bodied and disabled, the things that make them different are essential to who they are and that the love and the bond of twin-sisterhood between them is stronger than any difference could possibly be. I’d be fine if they avoid cavorting with annoying snowmen, though. 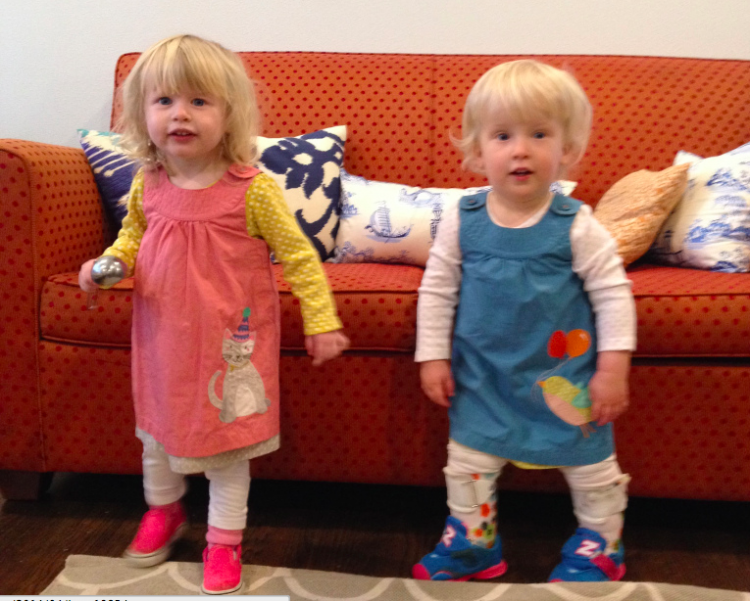 This post originally appeared on The Adventures of Ernie Bufflo.

Sarah Sweatt Orsborn is a writer living in Little Rock, Ark., with her husband, Jon, 2-year-old, twins Etta and Claire, who has Spina Bifida, two dogs, Bessie and Olive, and one not-so-Tiny cat. Her writing is most frequently found on her site, erniebufflo.com.

You are stronger than Spina Bifida

1 person is talking about this

We Need to Embrace the Uncomfortable and Talk About Disability

I was born with spina bifida/hydrocephalus. I grew up in a school of 300 children, only two of whom had disabilities in mainstream classrooms, one being myself. There was also no disability representation to be seen in any medium. I was once asked, “When was the first time you realized you were different?” It was when I started elementary school, and I quickly learned I was not like the other children physically and mentally. I was bullied in elementary school for having to wear AFOs as a walking aid as well as for being “slow” to learn in class. We were taught that when you are being bullied by a peer, you are to tell an administrative person (i.e., teachers, principal, school employee). The few times I approached my principal, he defended the bullies simply because their parents were a part of funding the school I attended. As a child, what do you do when the people who are supposed to be in your corner aren’t? The trauma this presented forced me to retreat into hiding my disability the best I could. When I started school in a new city, I told no one about my disability. This caused more harm than good, as I became an extremely anxious individual, hypervigilant and suicidal. I was unable to get the help I needed because that would mean I would need to admit my reality out loud. I was able to hide my disability until I was about 30 years old, but I realized this was preventing me from living as my true self. I made the choice to hide my disability because I didn’t think I had any other option at the time. I had a lack of resources and support. It made me feel isolated and fearful of society. At 30 years old, I was planning not to live another day; even with a room full of people who loved me, I felt alone. The one thing that stopped me was realizing all the things I would miss in the future if I wasn’t around. I needed to live, I wanted to live. When I started to face my reality, I became more liberated because I was living my life authentically. Growing up, I relied heavily on the online community as a way of human connection as I was afraid of being criticized by others. The screen kept me safe, guarded, and less vulnerable. It was only natural that I would use the online community (Facebook) to flip my narrative. I decided that despite the negative comments I received as a child it was no longer going to trigger me. I posted a photo of myself on my Facebook, wearing a pair of shorts exposing the AFOs that were once weaponized against me in others’ bullying tactics. The outpouring of support that I received was overwhelming. This in part tore down the walls in which I was hiding behind much of my life and opened new opportunities that I once was fearful of. I learned many lessons through this experience. Others’ opinions of me no longer faze me because I realized that their opinions are based on their own thoughts, not my own. I now use my voice to express my needs in areas such as healthcare, employment, and education, rather than be stigmatized. There are other people who can relate to your situation; there is in fact community. I began to take care of myself better and had mental clarity. I felt united rather than the isolation and confusion I originally felt. I have realized my self-worth and have accepted myself. With this new realization, I have come to not accept less than what I deserve as an individual. In 2022, the stigma of disability still exists. We are still very much underrepresented in media, and still frowned upon in pursuing relationships. We are forced to live below the poverty line, and fight for our basic needs both in employment and health care. We are still looked at as less than and aren’t included in conversations involving our overall wellbeing. Due to societal misunderstandings, the disability community has historically been bullied and experienced a never-ending barrage of ableism. We should be able to not fight alone and have those higher in power on our side. All these situations can cause one to lose their self-worth as an important part of society. We as a society need to do better, be better. Every human being should be treated equally, no matter race, gender, disability, or socioeconomic status. Never judge a book by its cover. Everyone can succeed when given the right tools and the opportunity to shine. You can write your own narrative, so let us act on changing it now. Let us be rid of stigma, bullying, and ableism in our society. The lack of education surrounding sexual health specifically and disability is still very much taboo and that leads us to raise another generation of children who will grow up to become adults who believe they are unlovable and lack self-esteem and confidence. We need to embrace the uncomfortable and have these conversations to educate society as a whole.

Hi, my name is Smoothie789. I’m new to The Mighty and look forward to sharing my story.

2 people are talking about this
Community Voices
Jhana Matthews @babygirl91

My new Video is now available. In this short video, I explain my Spina bifida and Hydrocephalus story. Please subscribe to my channel, thank you.
youtu.be/_JhRwQgotFw

My new Video is now available. In this short video, I explain my Spina bifida and Hydrocephalus story. Please subscribe to my channel, thank you.
youtu.be/_JhRwQgotFw