Mom Thanks Notre Dame Football Players for Helping Her Son

So often we hear about fallen athletes — football stars who fail to exhibit even the most basic skills of humanity, individuals who consistently put themselves before anyone else, role model, who were once held up on a pillar, fall in a fiery spectacle of disgrace. What we should be be hearing about are the athletes who put others before themselves — football players who think beyond the field and recognize the power that their position in life has on those that struggle. As a society we should be shining a light on teams and coaches who push their players to do good. Teams that provide their players an opportunity to reach out into their own communities to establish relationships with kids that look up to them.

This past week I had an opportunity to meet the angels of Notre Dame football. The men that play under the Golden Dome are more than just superb athletes. Football is a way of life in South Bend, Ind., and the players are idolized by many local kids. Notre Dame has shown their strength and abilities on the field time and again and have demonstrated that they have what it takes to be successful collegiately and professionally. But that is not what impresses me about this team and school.

My son is 10 years old. He loves history and can tell you even the most remote fact about Ancient Egypt, regardless if you want to know it. He struggles in school and has attended more schools in his short life than an adult does in their entire life. He has problems connecting with kids his age and often this leaves him shy and discouraged. His heart is the same color of the Notre Dame dome – Gold.

He has attended the Notre Dame football camp for three summers now. It is a fantastic program that the team runs for three half days in June. The players and coaches run the camp. They shout words of encouragement, they bolster the kids’ self esteem, they high five the kids when they catch the ball or get a tackle. It is an amazing camp that hosts more than 600 children every year. Most of the kids are excited to be there — they are outgoing, they seek out the players to talk and they have no qualms asking for an autograph. Most of the kids joke with their idols and are in awe that they are working out and learning next to a top collegiate athlete. Most of the kids smile and want to soak up every second.

But not my kid.

He keeps his head down. He barely talks to the kids in his group. He moves from one drill to another as if he is doing a death march. He wants to be at the camp — we would never force him to go — but he struggles with the pace and the loudness of the horns, the interaction with the players and kids his own age.

The week before camp, two Notre Dame players took time from their own lives to come and have dinner at our house to meet our son. They talked to him, threw a ball with him and joked with him. I haven’t seen him smile this much in a very long time. He held his head high when he came out and asked the gentlemen if they would like to see his room. He looked them in the eyes when he politely asked them, “Um, excuse me would you like to throw the ball with me?” He laughed and giggled when they missed a throw and wasn’t embarrassed when he did too. 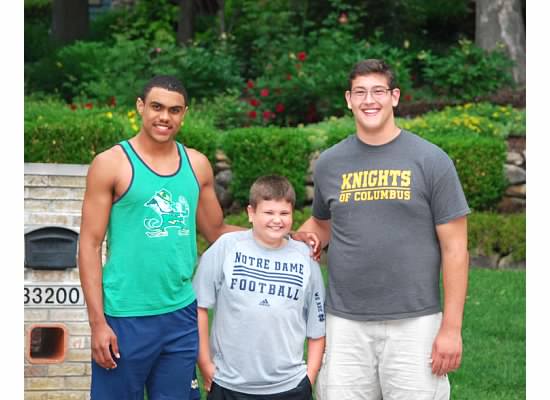 The same two players told their coach about my son and on the first morning of camp that coach came up and introduced himself. He took the time to make my child feel comfortable. A simple gesture that went so far, he could never really understand. My son went to camp this year and for the first time ever he laughed with the other kids. I watched him talk to the players, and he made it his quest to get every one of their signatures. I watched the players high five my guy, and I saw happiness reflected in his face. I saw pride and excitement.

Notre Dame Football players are a group of gentlemen that have left me grateful to be a part of this community. They have gone out of their way to make this camp successful for my son, for no reason other than the fact that they are an amazing team. Regardless of what you want to say about some athletes, I have to say that Notre Dame are truly golden both on and off the field. 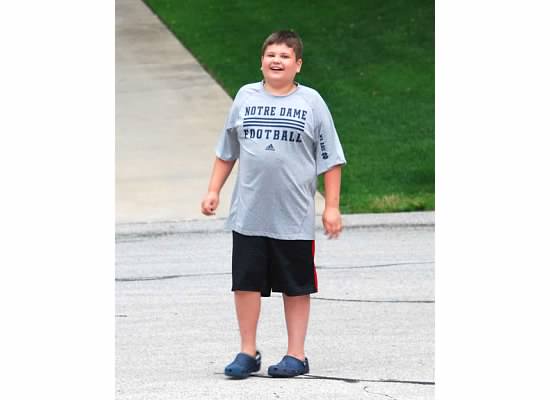