You Can Stop Trying Because This Amputee Already Won Halloween

Check out this year’s costume below:

“I’ve always dealt with the social discomfort of my disability by having a sense of humor,” Sundquist wrote on his blog. He also says the foosball costume represents a major milestone he reached this year in making the U.S. Amputee World Cup soccer team.

Sundquist was diagnosed with a rare form of bone cancer when he was 9 years old, according to his website. Ultimately, he lost his left leg to the disease, but by the age of 13 he was declared cancer-free and three years later he was participating in competitive sports.

In 2006 Sundquist went to the Paralympics in Turino, Italy, and he’s the only person in history to ever have been named to both the U.S. Paralympic Ski Team and the U.S. Amputee Soccer Team.

He has a unique sense of humor and does not shy away from laughing at his own disability.

Check out some of his costumes from previous years:

“In high school I wore a prosthesis all the time and didn’t want anyone to find out I was missing a leg,” he wrote on his blog. “But now I’m more comfortable with who I am and what I look like, and I guess with these Halloween costumes you could even say that I celebrate what makes me different.”

Go here to see the behind the scenes making of this year’s Halloween costume, and be sure to check out Sundquist’s Facebook page and website for more funny and inspirational photos and messages.

Share
or  Copy Link
Link copied to clipboard.
Be first
73 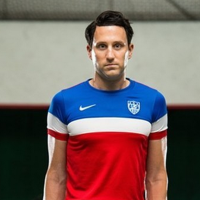