Our Autism Journey to a Big Boy Bed 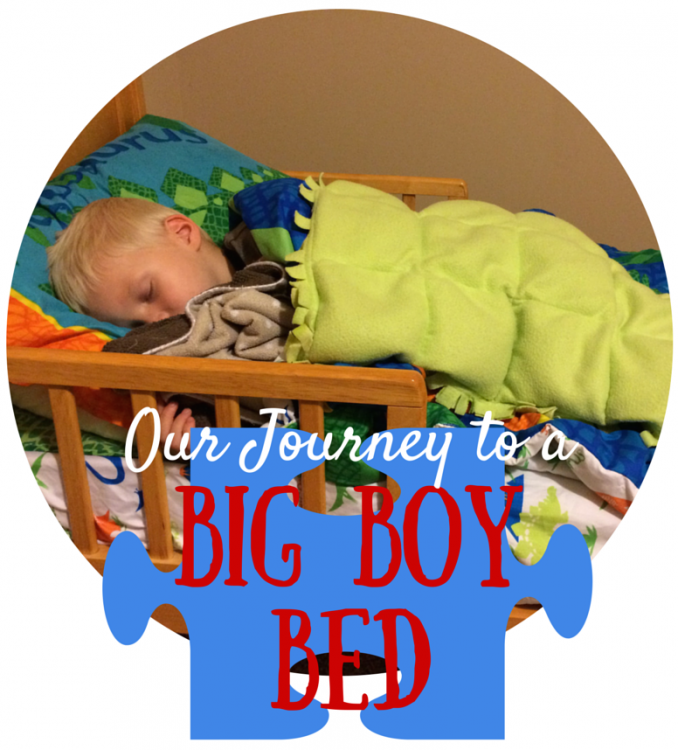 Brandon is 3. He was in a crib up until about a month after his third birthday. This was fairly old to still be in a crib. He had the ability to climb out of his crib for more than two years before we made the switch. But he loved his crib, and bedtime was easy peasy for me, so we went with it. He climbed out a couple times, but that was a rare occurrence.

Brandon takes a long time to fall asleep at night. He always has. He just can’t seem to shut his little racing brain off. When he was in the crib, it wasn’t that big of a deal because even though he could climb out, he rarely did. All he had to entertain himself was his imagination and his blanket.  Sometimes I would hear him belly laughing, just cracking up hysterically, and I would have no idea why. I knew that transitioning to the big boy bed was going to be a task. I started week one on my fall break at work so I’d have the flexibility for several late nights in a row.

The most important things I (try to) do are… 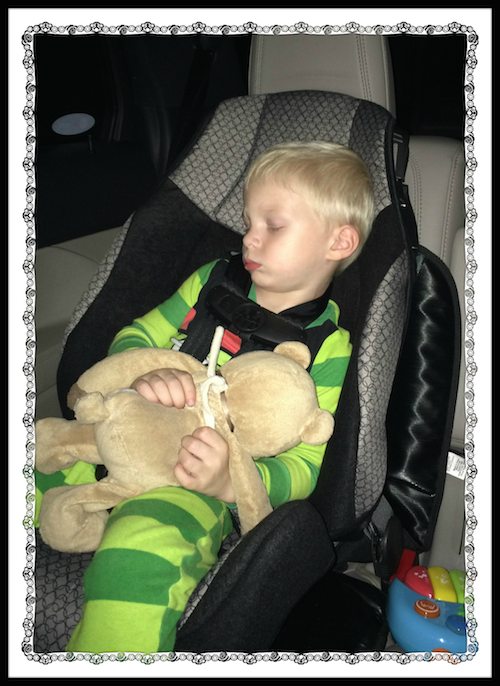 1. I don’t give up. No pleading, talking, scolding, reading to him, etc. He has to lay there until he falls asleep, and that is that. I just keep putting him back in bed. No muss, no fuss. No reaction to his antics.

2. I’m consistent. I don’t let him sleep with me one night or have a toy another night, or allow him to put a foot on the floor one night and then not let him the next night.

3. I downloaded an audiobook (free from the library) to help me pass the time, especially in that first couple weeks when I spent most of the time in his room.

4. Nanny cam! Staying in his room was boring, frustrating, draining, hard on my body and not how I wanted to spend my evening after I long day at work.

5. I installed a light switch guard so Brandon can’t turn on his bedroom light. This tremendously cuts down his desire to get out of bed.

6. I put a doorknob safety cover on the door. This is a safety issue. It prevents him from trying to walk downstairs in the middle of the night, climbing the catwalk rails or getting into some other sort of trouble.

7.I was off work for week one of the transition. I needed to be able to stay up super late to make sure Brandon didn’t get out of his bed.

If you’re wondering, here’s how it went for me…

Night 1:
Brandon didn’t nap at school today. So, my first thought is, “Yes! He’s going to pass out at 8 and sleep in his big boy bed all night long without a fight. We’re sitting at the table eating dinner, and I’m pleased. He’s happily eating his mac ‘n cheese while I am eating a sandwich. He’s zonked. He’s passed out… in his high chair, mid-bite, at 6:30 p.m. So I think, “OK, this is still not so bad… he’ll be up at the crack of dawn, but at least I don’t have to fight him to stay in his bed the first night. He’ll wake up and realize, ‘Hey! I sleep in a regular bed now… cool!’”

I put him in bed. He’s still asleep. I turn out the light and creep away. At 8:30 I hear the pitter patter of his little feet running around his bedroom. He took a two-hour nap and woke up pretty much right at bedtime. Sigh. He didn’t go to sleep until 2 a.m. I lay on the floor next to his bed, dozing in and out of sleep, waking up every 15 minutes or so to lay him back in his bed. Night one was a just a bust.

Night 2:
Brandon has realized he thinks it’s funny not to get out of bed, but to almost get out of bed. He’s still in bed, but he has one foot on the floor. Or he’s still in bed, but he’s laying the wrong way. He’s still in bed, but his legs are hanging over the rail. Whatever. If I move him every time he’s not laying down appropriately, I’m just giving in to this game. In fact, I’d be losing the game. Once he realizes he’s getting zero attention from me (positive or negative) his shenanigans are fewer and further between each other. He gets out of bed only twice. I hear the snoring begin at 11 p.m… music to my ears. Can I really be this lucky getting him into a big boy bed?

Night 3:
I put him to bed at 9:30 (later than normal) to make sure he’s tired. I start off sitting next to his bed, facing the door. He gets out of bed, and without looking at him or talking to him, I put him back in bed. This happens repeatedly. One time he almost makes it to the light switch. He’s sure messing with me tonight. He thinks all of this is hilarious. On roughly the eighth time, I can tell I’m close to losing my cool. I put him back in bed and walk out of the room. I take a deep breath — several deep breaths actually — and count to ten. I walk back in, and of course he’s out of bed, so I put him back in, still not saying a word. I fade myself out by inching my way to the door every few minutes. Eventually, I stand just outside the door with it cracked so he knows I’m still there. He doesn’t get out of bed for 15 minutes, so I shut the door. I stand outside the door for 30 minutes, and he doesn’t move, although I can hear that he’s still awake. I go down to bed, and he doesn’t get up the rest of the night. I don’t know what time he actually fell asleep, but he did stay in bed. I’m so glad I didn’t give up.

Night 4:
It’s 9 p.m., and he’s asleep in the car on the way home from Nanna and Poppy’s house. Yes! That was how night one was support to go, but hey… if there’s one thing Brandon has taught me, it’s that life doesn’t work out just how you plan.

Nights 5 through 14 are all about the same. He lies in bed, and I lie next to the bed. He makes noise and wiggles around, but for the most part he stays in bed. It’s time to start fading out so I don’t have to lie on the floor for two hours every night waiting for him to fall asleep.

I start fading out by slowly inching my way to the door, eventually just standing outside the room out of his view. If he gets up, all I have to do is walk in the room, and he’s already darting back to his bed before I can even get to him.

Night 15
Why didn’t I think of this before? Nanny cam! Now I lay Brandon in bed and watch TV in the bonus room with my phone in my lap, streaming video of Brandon in his room. I can be up and putting him back in bed before he even makes it to the light switch. I couldn’t have used the nanny cam any sooner than this, though, because I had to set the foundation for him knowing he has to stay in bed. 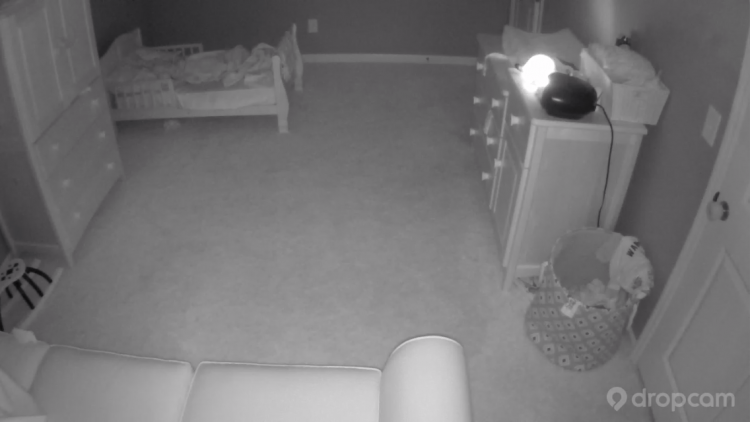 Update, Dec. 19: I’m over the moon about Brandon’s progress in his big boy bed. It took a lot of time, patience and late nights, but now I’m at the point where I put Brandon in his bed, and he doesn’t get out. I don’t have to go in his room at all to put him back down. It’s been this way for at least a month now. It’s so freeing. All kids are unique in their progress, but these things worked for us. I’m so proud of my little man!

This post originally appeared on Ramblings of a Special Mom.