February 27, 2012 was the day my daughter, Lucy, was diagnosed with Rett syndrome. Almost three years have gone by since then. I remember saying to my husband a week after receiving the news, “Well, a week has passed, and we are still here.” It felt like we literally just wouldn’t make it at times in that first week. I imagine it feels this way for all parents who receive a diagnosis that will change their lives forever. What I wish I’d known that day was that yes, this was going to be a hard life for all of us, but it wasn’t going to be as hard as we first imagined.

I recently read a post by a parent who’d just received the Rett diagnosis, and they rambled off a list of questions, clearly looking for hopeful responses that might indicate their daughter will have a different path than most children with the disorder. Questions like, do all girls have seizures? Does everyone lose the ability to walk, talk and use their hands? Does every child have a rapid regression phase? I’d done the same. I wanted desperately to understand what her specific mutation meant, and I wanted someone to tell me exactly what was going to happen to her. At the time, the uncertain future was mind-numbingly heartbreaking. What is going to happen? That was all I wanted to know.

A lot of things both good and bad did happen. Lucy slowly lost the ability to turn the pages of her board books and then suddenly lost most her ability to functionally use her hands. Her body’s movements and muscle tone suddenly changed to the point where she couldn’t consistently sit up on her own anymore without back support. Lucy’s breathing became irregular, first with hyperventilation, then changing to breath-holding. Gradually, over the course of a year, Lucy lost five pounds and the ability to maintain proper nutrition by eating 100 percent orally and had to get a feeding tube. And last fall, out of the blue, she had her first seizure. I will never deny that these past three years have been hard. Hard for her, hard for my husband and me, and hard for all the other people who love her.

However, in spite of all of those hard things, Lucy has become the strongest, bravest, most amazing human I’ve ever known. We took Lucy to a Rett syndrome specialist who educated us on her condition. Because we became experts ourselves, Lucy was able to thrive. At 2 and a half years old, she began using a communication book called PODD. She learned to nod her head for “yes” and turn it for “no.” She’s learned to use a Tobii eye gaze device in conjunction with the PODD to communicate with us all day long. Lucy is funny and happy and loves Tinkerbell, dinosaurs, Barbies and the Avengers. She rides an adaptive tricycle, makes gorgeous finger paintings, and loves to swim and garden. She tells us when she wants to go somewhere and when she does and doesn’t like things or people or the food I’ve made for her.

I wish I’d known that Rett syndrome would get easier and easier to accept and live with, but that also sometimes my heart would break all over again with no warning. I wish I’d known it would be like that. If I’d known that even though I’d be sad, I’d be very happy, too, it may have been a little easier. If I’d known that life would be hard but so very joyous, perhaps I would’ve felt slightly less anguished. If I’d known that Lucy, by being so brave, would force me to use every bit of strength, patience, perseverance and ingenuity I never even knew I had, I would’ve known everything was going to be OK. If she could be tough, so could I. If she could wake up and smile each morning, so would I. Back then, on February 27, 2012, I just didn’t know yet how resilient we all are. 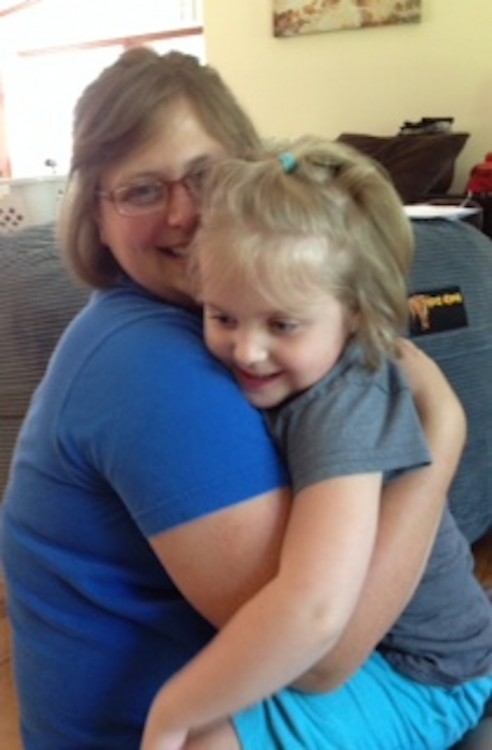 For all of January, The Mighty is asking its readers this question: If you could go back to the day you (or a loved one) got a diagnosis, what would you tell yourself? If you’d like to participate, please send a blog post to [email protected] Please  include a photo for the piece, a photo of yourself and 1-2 sentence bio.