How I Explained My Son's Autism Diagnosis to Him

My youngest child and I finally had “the Talk.” I had recently sensed that it was imminent, I knew that it was crucial, and I also had conflicting feelings about it.

Many parents of children with special needs know what “Talk” I mean, and it’s not “the Birds and the Bees.” During this “Talk,” for the first time, my child and I discussed the fact that he has a form of autism.

My son is 6 and a half years old and has a dramatic personality. Everything he feels, good and bad, he feels on a large scale. We jokingly call it “not boring.” He has an inquisitive mind, a huge smile, and a great sense of humor. I could go on and on listing positive adjectives to describe him. He also happens to have a diagnosis of autism spectrum disorder, what some might call Asperger’s syndrome.

My heart overflows with love for my darling boy, my baby. I am proud of him and not ashamed that he has a diagnosis of autism. But he often struggles when asked to use his own words to describe how he feels, or why he feels that way. He has only recently started to recognize and articulate his awareness that many things seem to come easier to his peers than to him.

I knew that very soon the time would come when I would need to explain to my son the reason behind some of those struggles. I also knew I had to be very careful with my words and how I presented autism. There is still so much stigma in attached to special needs, or even to simply being different (not in my mind, but society seems to feel differently). I didn’t want him to see himself as flawed, or view his diagnosis as restrictive, limiting his expectations of what he could achieve in life.

I did not want the truth to be damaging. I wanted it to be illuminative and empowering. I hoped that having knowledge of his autism spectrum disorder would improve his understanding of how his brain works and help him be more patient with himself. I hoped it would help him learn coping mechanisms so that he can better deal with frustration, distraction, and anxiety. I hoped that he would be able to tap into the unique way that his brain processes information and use it to accomplish great things.

An additional hope was that, as he grew, it would help him have a greater sensitivity and acceptance towards others around him who may also be facing struggles of their own. 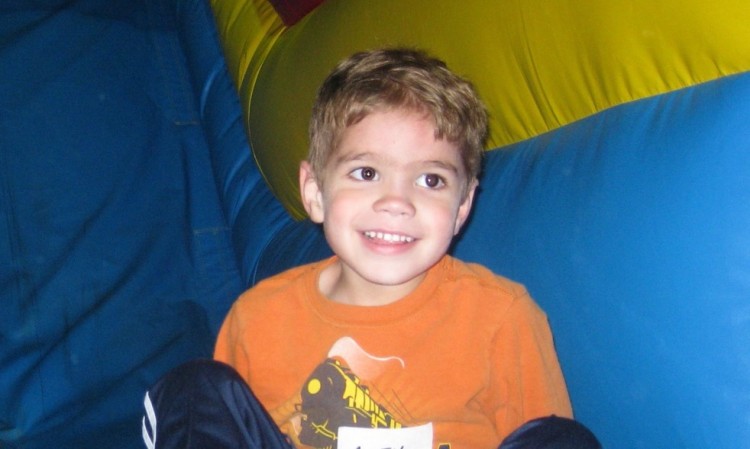 The day we had “the Talk” was just like any other day; a day that happened to have the subject of autism present itself in a teachable moment. I was on the computer and my son entered the room. He noticed one of those sidebar ads that pop up based on keywords (in this case, “autism”), and a picture of a young boy caught his eye.

My pulse quickened and something inside me said, “It’s time.”

I answered him, “autism resources,” and I felt the weight of the words as they exited my mouth and hung there heavily in the room, waiting to be fully revealed. After thinking for a moment, he asked the question I had long expected, “What is… autism?”

I took a deep breath, and everything seemed to freeze. It was almost as if I was outside the situation, looking in, knowing the importance of what was about to happen and that it would change our lives forever. I had prepared exactly what I wanted to say, yet I still felt my heart pound and my throat tighten. I was keenly aware that the manner in which I presented this information would be crucial. In the next few moments I had the power to hurt, or help, his self esteem.

I looked into my son’s beautiful face and began to speak, “Autism is a way that some people’s brains are wired. It may make them think or feel a little differently than other people. It may also make it difficult to concentrate if there is noise around, or make it hard to eat foods with certain textures, or might make someone want to chew on things that aren’t food. They might have trouble calming down if they get really excited, or need to walk in circles. They might even get REALLY upset if they are playing a game and don’t win.”

By that point, my heart was thumping so hard it felt like it was battering against my ribcage, trying to be set free from the confines of my chest. I had been describing specific ways that autism affected my son. I wondered if any of it would sound familiar. I then asked the big question, one that I hadn’t planned, not sure how he would respond, “Do these things sound like anyone you know?”

“Yes,” my son replied, but then stared silently at the wall. “Who?” I asked him. He paused, looking a bit unsure. But then he gave a little half-smirk, and replied, “Me.”

With a mixture of sadness and relief, I reached out and gave my child a reassuring hug. I told him, “I love you so much and am so very proud of you. You are smart and good and funny. Autism just explains why sometimes things feel difficult for you, why you might get so frustrated, and why you have an extra teacher come help you at school.

“But autism not only causes you some frustrations, it also makes you unique. It helps you have an amazing memory. Even when you were very little I could read a book to you and you would have the whole thing memorized after just hearing it once.” He seemed pleased to hear that.

I pondered what else to say, and added, “Autism affects people different ways.” I then stressed to him, “Different isn’t bad, it’s just different.” He started to walk away, and I called out to his back, “Do you have any questions?” but he was already gone.

I sat there, alone, stunned and a bit surprised. It had finally happened. I had thought the conversation would take longer, but apparently my child had heard all he needed to. I wondered if I did it right. I wondered if he got it, or if he felt sad, confused, or overwhelmed. I felt a strong urge to cry.

A few minutes later my oldest, the sensitive caretaker of a big brother, came into the room with a concerned look on his face. He exclaimed, “Mommy! He said ‘autism’!” I reassured him, “It’s okay. He asked about it after seeing the word.” “Oh good,” he sighed, “I was worried he heard you say it to someone else. You told me you weren’t going to tell him yet.” “Well,” I replied, “the opportunity came up, and I thought he was ready.”

We walked downstairs together, protective big brother and I, to continue the conversation. We approached my unique, creative, exuberant boy; a boy who also happens to have autism. “What did you tell your brother?” I asked, as he sat at the kitchen table and occupied himself with a roll of Playdoh. He didn’t look up from his work, and replied nonchalantly:

“I have Autism. And it means that your brain works a little bit different than other people. But different doesn’t mean bad. Different just means different.”

Tears filled my eyes as I hugged my son tight. I think he gets it.

You can also find Jennifer at her Seriously Not Boring Facebook page.