Parents Who 'Tortured' Their Children Sentenced to Life in Prison

Sometimes the news isn’t as straightforward as it’s made to seem. Sarah Schuster, The Mighty’s editorial director of contributors, explains what to keep in mind if you see this topic or similar stories in your newsfeed. This is The Mighty Takeaway.

After pleading guilty to 14 counts of torture, dependent adult abuse, child endangerment and false imprisonment, David and Louise Turpin were sentenced to life in prison on Friday. Disturbing details of the abuse 12 of their children endured first came to light in January 2018, when one of their daughters managed to escape and contact authorities.

“My parents took my whole life from me, now I’m taking my life back,” said one of the couple’s children during the sentencing, NBC news reported. The California couple, who starved, beat and chained their children, will be eligible for parole in 25 years.

Stories like this are always heartbreaking, and bring to light the most extreme examples of what child abuse can look like. Considering the details of this case, which has been referred to as the “House of Horrors,” here are three things to keep in mind.

1. Abuse doesn’t have to be this extreme to “count.”

Whenever a case like this is covered by the news, the gruesome details of the abuse hold the public’s attention — and the more “horrifying” the abuse, it seems, the more coverage a story gets.

And while yes, this story is horrifying, it’s important to remember that abuse doesn’t have to be this extreme to count. There are many different types of child abuse, and most do not involve being chained in your bedroom. If you’re someone who experienced abuse during your childhood, be careful not to compare. Your experience is still valid. Just because it “could have been worse,” doesn’t mean any form of abuse you experienced was justified.

2. You don’t have to forgive someone who abused you right away – or at all.

Along with the heartbreaking details of the abuse itself, another thing that stands out about this case are the quotes from the children. Despite the awful and inhumane conditions they were forced to live through, a few made a point to say they still love their parents and even forgive them for their actions.

According to NBC news, one of the sons said, “Sometimes, I still have nightmares from things that have happened… But that is the past and this is now. I love my parents and have forgiven them.”

To me, this level of forgiveness is pretty stunning… and doesn’t have to be the norm for all child abuse cases. It can take years and years for someone to come to terms with the abuse they endured… let along forgive their abuser. While forgiveness may be healing to people who experienced abuse, it’s by no means mandatory. In her piece, “I’m Done Trying to Forgive My Abusers,” Mighty contributor M. Liang wrote:

If you’re reading this and people are telling you that your own healing begins with forgiving your abusers, you can try it. I encourage you to at least try it. But if you tried it and you feel like it’s absolute bullshit, then don’t do it. You only have to forgive yourself.

There is no one “right” way to heal. Forgiveness is personal, and not necessarily a prerequisite to healing.

3. Abuse can happen in families that appear “fine.”

In many ways, it seemed the Turpin family moved through the world like a somewhat “normal” family. Louise Turpin’s sister told NBC News, “We always thought she was living the perfect life.” Although the children were homeschooled, they would go on family trips to Los Vegas and Disneyland.

But, as most who grew up in an abusive household know, things aren’t always as they seem. Abuse happens in all types of families, and often abuse goes unnoticed because a family seems OK on the outside. Every abuse survivor deserves to be believed — it doesn’t matter if everything seemed “fine.”

If this case making the news again brings up thoughts and feelings about your own personal experience with abuse, please know you’re not alone — and that you don’t have to read any coverage that might trigger you. If you need support right now, please call The National Domestic Violence Hotline at 1-800-799-7233. 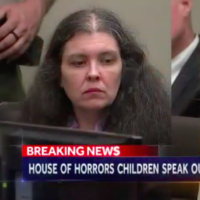