Why I Never Stopped Writing After My Rare Diagnosis

Tonight, I sent another raven to the north. But where are other ravens that I’ve released?

I wrote this line in a poem called Sending a Raven which I expressed my desire to study again as I did when I was in Canada. I was planning to return to study in January. However, when my plans of going back to study was delayed to May, I was facing another disappointment. The walls of my heart have been torn apart, so I sat down on my chair, picked up a pen, and started writing this poem. Raven, in my poem, was another opportunity lost and never returned.

When I started to face difficulties in coping with my trauma, I started to write poems in high school. This hobby of expressing my hardships and sufferings allowed me to cope with my mental health. It was also a way of allowing myself to express my desire to forgive those who have abused me. Poetry was my greatest companion during my adolescence, and especially when I am fighting alone.

I experienced my greatest hardship when I came to my home country to recover. In a place where I did not know anyone, I did not know how to cope with my condition, nor did I know how to interact with others. When I had these horrible feelings in my chests, I picked up my pen and wrote whatever I was feeling. I would combine my emotions with imagery, similes, and metaphors and write confessional poems. I listened to a song that fit my emotions, and my pen never stopped. It was a continuous flow of creativity and sorrow.

Poetry was not merely a style of writing for me; it was a tool for me to speak when I couldn’t.

Often, I write confessional poetry and post them on online rare disease groups. When I do so, I was always amazed at how many people were reading my poems; I realized that writing has power. Writing was not merely words, but a beautifully assembled thoughts that could convey so much to others. Using my experiences, I was able to speak to others through poems that I could not do in real life.

If you feel that you want to speak but if you cannot do so, please do not feel afraid to write what you are feeling.

Your words are powerful.

Your words deserve to be read and to be taken seriously.

Your words are beautiful, valuable, and you matter.

Today, I am still writing.
I will never stop writing.

Do you want to share your story about living with a rare condition? Click here to find out how. 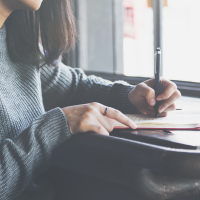