A Story of Finding Christmas Peace as a Cancer Survivor

At this time four years ago, after two months of radiation, almost five rounds of chemotherapy and a feeding tube in my stomach, all I could think about in the days leading up to Christmas was the sound of a church choir singing carols. I had spent my entire childhood in church. And soon after college, I gave it all up when I realized that it was someone else’s truth instead of my own. But for some reason, in the midst of cancer treatment in December of 2015, I wanted that music so badly. I wanted it to wash over my soul and make me whole again. I wanted it to take away all of the pain. I wanted the energy to fill my sick body with goodness and mercy.

My friend, Gretchen and I started daydreaming (via text because I had already lost my speaking voice) about attending a Christmas Carol service in Boston. She has the same Protestant Christian background I do, and even though neither of us have set foot in a church in years, she understood without explanation. We even talked about getting a wheelchair to make it happen. But we couldn’t. We both knew I was too sick with cancer for it to be a reality, and eventually I was admitted to the hospital on Christmas Eve. So two years ago in 2016, a year after my cancer treatment, when the Christmas season arrived, without much discussion, it was obvious that we would go. The first time either of us had wanted to go to church in as long as we could remember… or ever.

We went to Trinity Church in Boston. It’s a big, beautiful, fancy Episcopal church that sits in the middle of Copley Square. We walked directly to the front and found seats eight rows back. There was nowhere else in the entire world I wanted to be. Legitimately. And there was no one else in the entire universe with whom I wanted to share this sacred ritual with other than Gretchen. We went into that space with new lenses from all of our experiences over the past year, less judgment and made it a point not to get too caught up in doctrine. We just let it be.

As soon as the first lone caroler started a capella from the back balcony, I could feel my throat start to constrict. Twenty seconds in and I was already holding back tears. I felt the tingles, the Holy Spirit, the energy in my bones, in my blood and in my lungs. I heard, “Peace, Peace, Peace.” I had my heart set on “O Holy Night,” because let’s face it — it’s the best Christmas song out there. The high note at the end: “Oh Night Diiiiiiiiiiviiiiiiiiiiiiiiiiine!” It’s a real win. But they didn’t sing it. And that was OK because I had forgotten about the sea of “Gloria’s” in “Hark the Herald.” Like magic. I closed my eyes and it felt as though angels themselves were singing the chorus. I had a flashback to standing next to my mother in my childhood church. I could practically smell her powdery perfume and feel her special Sunday winter coat next to my skin. She always sings different notes than the congregation, separating herself to create harmony. And it felt peaceful: That memory. Of my mother. Of church.

When the program read, “kneeling was optional” for the Hymn, “Silent Night,” Gretchen and I didn’t hesitate to assume position. I mean, why wouldn’t we get on our knees and pray? Halfway through the first verse, Gretchen put her arm around me and put her head on my shoulder. I held her hand. And I sobbed. I cried because I was happy to be alive. I cried because I felt the weight of a cancer diagnosis lift from my shoulders. I cried because I could feel something deep in my core that was shaking me in a way of love, of comfort and of light.I had asked the universe for peace. For the ability to find calm amidst the chaos: to relinquish control, preconceived notions, backstories and simply accept what is and what will be. I had also come to the belief that people who have died are (on some level) connecting with me. So as I celebrate Christmas this year, I remember this: Jesus was born and became a man who spread love. To literally be love. To be kind. To be selfless. To stand up against hate. And he died. And I feel connected to Him. Go. Figure.

And then, jumping over slush puddles in the freezing cold, we said out loud, “Let’s eat French food,” and just started walking without any direction. We stumbled upon a tiny little bistro on Newbury Street, sat side-by-side on bar stools, drank wine, ate escargot and talked about everything else we wanted to. 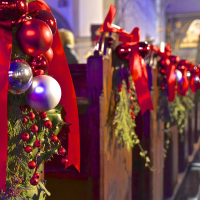