When Schizophrenia Makes You Question If You Should Have Kids

I want to be a mother, more than anything, but as someone who lives with schizoaffective disorder depressive type, I often think about the risks associated with having a biological child. Now, add to that a family tree with schizophrenia, and I struggle with the morality of it.

Schizophrenia runs in my family. My mom’s biological mother lived with paranoid schizophrenia. She did not take her medication and was oftentimes homeless. As a result, my mom became a ward of the state and was placed in foster care because of her mother’s inability to care for her. She was in foster care for years. My mom was eventually adopted by her paternal grandmother.

I developed this condition when I was 17 years old. The typical age of onset for schizophrenia is between 16 and 25 years of age. It started with the feeling things were sinister and dark. Then, I began believing things that were not real. I attempted suicide when I was 17 years old, and it was caused by symptoms of schizophrenia. I sustained a concussion and staples to my head as a result. Schizophrenia is linked to a higher than normal chance of suicide and attempts.

After my attempt, I did not get help. Approximately 50% of people diagnosed with schizophrenia have received no treatment. I went to college, studied business and graduated five years later. My condition progressed steadily over the years until I was hospitalized for the first time. I was 26 years old and my mental health had deteriorated significantly. I was described as being “gravely disabled.” I was subsequently hospitalized every year for three years following my first hospitalization.

I’m at a place now where I have been taking my medications for nearly three years. I can better manage my symptoms with an antipsychotic medication, and I think a lot about having a child with my partner. I’ve tried several antipsychotics, and some were safe for pregnancy, but they were not effective at treating my symptoms of schizophrenia.

I could forgo medication, as some do; however, I risk another acute psychotic break and possible harm to my developing child.

Let’s say, however, I proceed without medication. I then risk my child developing this condition with the probability being approximately 10 to 15 percent.

If my child were to develop schizophrenia, it could impede on many facets of their life. They may not be able to perform well in school, or hold down a job, which could ultimately result in homelessness. Somewhere between one-third and one-half of all homeless adults live with schizophrenia. But then again, if they are well-prepared, well-informed and well-supported, these things could be mitigated.

I believe there are risks associated with living with schizophrenia and having a child, and because of this, I do not take this decision lightly. However, it’s not necessarily a black-and-white, right-or-wrong scenario. It’s a big decision that I believe necessitates a family contingency plan. I also believe it is one to be made with the help of a professional health care team. 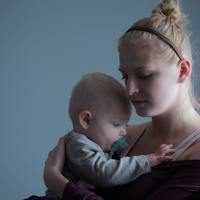