When I was a kid, I didn’t want adventure. I wanted normalcy. There were so many times I wished, for my sister’s sake, she could be a normal big sister who could give me advice, date boys and share clothes with me. That’s not what I have. I have Emily.

Emily has a random mutation of a single gene — something minuscule changed her entire brain, resulting in Angelman syndrome, a rare neuro-genetic disorder that causes severe developmental delays, absence of speech, gait/movement/balance problems and in most cases, seizures.  We’re lucky, however, because unlike the majority of cases, Emily has a mutation of the UBE3A gene, instead of the deletion. She’s therefore more mildly affected than those with the deletion, who sometimes cannot walk. Emily learned to walk at the age of 3 and has never had seizures. Because the technology was not yet developed enough to detect her genetic mutation when she was young, she was not diagnosed until high school after extensive genetic testing at the University of Chicago. So before that, I had to use phrases like “severely cognitively disabled” in an attempt to explain my sister.

I remember the day I realized my sister was different. I was around 3. I’d gotten a splinter and ran inside to my mom. I sat down on the kitchen floor and waited for my mom to get tweezers and a Band-Aid. Emily, 6, sat down next to me and fussed for a Band-Aid. “I know, honey. You want one too,” my mom said, wrapping one around Emily’s finger, even though there was no need. As I sat there watching this, some connection sparked in my brain: “I’m growing up ,and Emily never will.”  That is one of my first memories.

Emily turned 23 this year. We have another brother who is five years older than her. It was a confusing limbo for me as a child, since I was physically younger than Emily but mentally older.  Emily will always be about 3 years old cognitively. When I was a kid that was kind of fun since I always had a playmate. We would run around in the backyard (albeit, Emily kind of shuffled) and swing and play in the sandbox. I learned not to get upset when she knocked down my sandcastle and to stay away if she got angry. As my parents taught me, the rest of us have the ability to use words when we’re upset, but Emily doesn’t so she expresses it any way she can, generally by having a tantrum. The best thing to do was get out of her way when she was mad and let my parents handle it.

I didn’t know how to talk about my sister when I was young. One neighbor girl, when we were 5, asked, “Does your sister wear diapers?” I hated the snotty look on her face so I lied and said no. A few years later, at Chuck-E-Cheese for my eighth birthday, Emily and I were crawling around the tubes and two younger girls watched as she passed by. “She’s fat,” one said to her friend. I bit my tongue and shoved Emily forward. Even though she didn’t understand the words, I certainly did. In middle school, when a fellow classmate was making fun of individuals with disabilities, I kicked him in the shin.

All of this information, these anecdotes, these memories, have been buzzing around my head for months. I’ve been trying to organize my thoughts about Emily for a long time. How does she see the world? How does she see me? I’m her translator, her referential point in new situations, her protector, her teddy bear. I know her language of noises, pointing and signs as if I were bilingual. It’s not easy all the time. She has impressive tantrums, sometimes in public. She’s like a clingy puppy when I’m home from college. And yes, she can be kind of gross, like a toddler would be. I’d rather not say the amount of times I’ve been sneezed on.

Emily is always giving hugs and kisses. Yes, she has big temper tantrums, but she generally has an exceptionally happy demeanor. She has the biggest belly laugh you ever heard. She loves things with wheels, musicals, bowling, baseball, swimming, ice cream, family and friends. Her vision and hearing are sharp and her memory even more so. She never forgets a face or a route to get somewhere. She adores riding in the car and could do it for hours on end. She loves to cuddle. She likes to tease and play jokes on people. She writes “Em” on everything she owns. She squirrels away things in her many backpacks, stuffing them beyond belief. She enjoys shredding paper. She flaps her arms when she’s happy. She cries at sad music and laughs at slapstick comedy. She’s the most loving, forgiving person I know.

That is what I have. I have Emily. 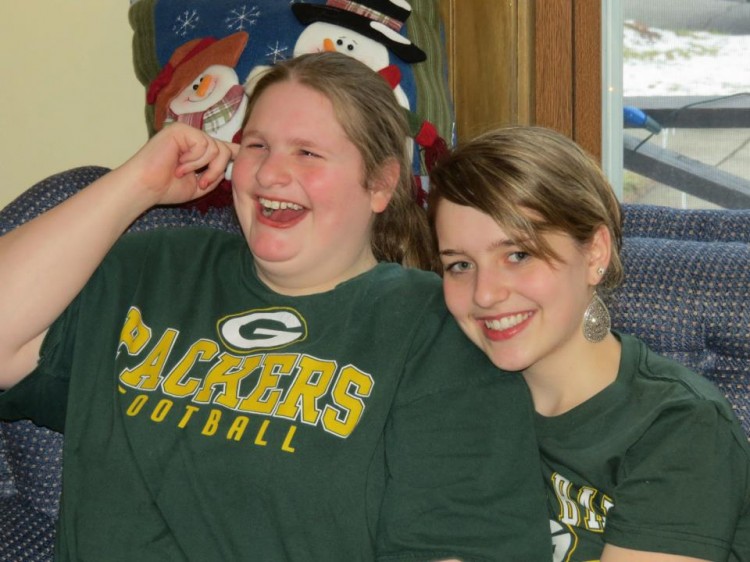 Christina Spaeth is currently studying Communication Sciences and Disorders at Northwestern University. Her plan is to go on to grad school and get a degree in Speech-Language Pathology. This career choice was inspired by her dear older sister Emily, who has Angelman syndrome. She loves her and the rest of her family so much!

Save
Conversations 31
We use cookies and related technologies to help identify you and your devices, enhance your experience and conduct advertising and analysis. By choosing "Accept", or by using this site, you are agreeing to our use of cookies. You can read more about how The Mighty uses cookies in our Cookie Notice.
Manage Choices
Accept