A 5-Year-Old Made Me Cry

Today I had a big one – one of those ugly cries where what happened is worth crying about, but it’s almost like you’ve bottled up months’ worth, and this one thing sets ‘er all off.

But I’m so thankful for Noal in his simple yet touching approach. Oh, what I am learning from these hooligans.

Whenever I pick Noal up after 4:30ish there is a real mix-match of kiddos left over in one room waiting for their parents who work late.

I always try and peek my head in to “spy” on Noal. He is usually leading the pack in some form or another, even if the kids are 4 or 5 years old. Today he was at the back of the room telling one little boy who was trying to help him with a puzzle that the piece he had was “too big, that’s too big” – his new favorite saying to everything that doesn’t seem to work or that he doesn’t want. “You want eggs for dinner, Noal?” “No mum, that’s too big.” “OK, buddy…”

Normally he sees me right away and runs over screaming, “Mumma!” and proudly shows off his “Pippy.” Today, however, this 5-year-old little girl met us at the door, aggressively grabbed at Pip’s eye patch & said, “That baby is broken. Look at her, she’s broken,” then pointed at Pip’s eye, turned to her little friend and said, “Gross, gross baby.”

She wouldn’t stop saying it, and before I could calmly explain or internalize “broken” or “gross” too much, my little tank of a man came running over, stepped in front of this little girl, put both hands on Pip’s cheeks, kissed her & proudly said, “She’s OK, she’s my sista” and then put her little head into his chest and started patting her back. 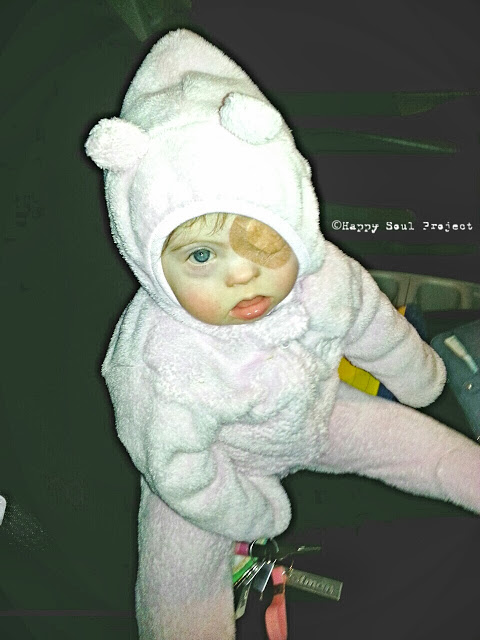 Hello, tears, how are you? So glad you kept ‘er in till we hit the van. Ice cream for our hero, Noal, for dinner? I think so…

Tara is a quirky wanna-be-writer/blogger, adoring/annoyed wife, minivan momma to three hooligans, one who just happens to have Down syndrome, and the founder of the Happy Soul Project. She created a worldwide #differentisbeautiful campaign, gets thousands of people to do #BeAwesomeToday Acts of goodness &#038; has given over 6,000 Kick-It-Capes to kids facing terminal illness or vast differences in life. Happy Soul Project runs a successful online shop where products sold, are made by artist with extraordinary needs. This year Happy Soul Project will launch an Academy &#038; Apprenticeship program.