This originally appeared on Role Reboot. Republished here with permission.

I’m not a person who relishes infinite choices, paths ahead all equally fraught and delicious. I like guidelines and known entities, maps and strategies. Parenting is, understandably, a challenge for someone like me, who wants to know what’s coming next.

Even without those proclivities, all parents wonder about the origins of their children’s difficult phases and their own complicated reactions to them, considering the ramifications of every choice, asking for advice and considering every angle. Did I handle that right? Could I have avoided that struggle?

My daughter, Sammi, however, has raised that level of uncertainty to an entirely different level. At 9 years old, for the first time ever, she’s just had several months without surgery, medication or special diets, leaving me wrestling with the questions above plus another: In these nine years, what was part of the normal rhythm of childrearing, and what was related to her constant ill health? What required the normal course of action, and what called for something different?

When she was a baby, I was flattened by feelings of thick despair and panic, believing something was wrong with her. She didn’t sleep, breathe or eat right — and my psyche was on fire, all adrenal glands pumping vigilance into my veins for months. Doctors told me she was fine, told me to sleep train her, to withhold nursing and offer more food, to wait for her to outgrow things.

It turned out that Sammi really was broken. When she was a year old and on her third hospitalization for a cold, we finally discovered an extra artery wrapped around her airway and gullet, choking her from the inside. Surgery at 14 months to correct the problem put an end to the hospital stays for respiratory infections. The constant nursing I’d doggedly determined to continue had turned out to be the only thing that kept her from a feeding tube. My regular nagging and anxious questions were what kept her in front of the doctors who eventually diagnosed her.

It was the biggest, ugliest feeling of “I told you so” I’d ever experienced.

Does that mean I didn’t have postpartum depression? Does that mean my anxiety and panic, my feelings of fear for her life, were not hormonal but pure instinct?

As a toddler, Sammi’s tantrums were monumental and violently self-harming. She sat balanced on her tailbone on our hardwood floors and threw herself backward to whack her head against the wood, screaming, over and over until I moved her onto a padded cushion, which only dulled the thud.

She woke raging in the night, yanking me awake with the sound of shrieking and banging. I’d race up the stairs to her room and find her in the dark, on her floor, grasping the upturned ends of her rocking horse to hold them in place as she rammed her forehead into the sharp ends. We took the horse away after that happened more than once, but she just used the bottom rail of her toddler bed instead.

We cut her hair with bangs to cover the bruises she gave herself.

Eventually, terrified that something horrible was happening inside Sammi’s brain, we went to a developmental therapist. The therapist listened thoughtfully and assessed the situation as chronic sleep deprivation resulting from Sammi’s years as a cardiac patient and our reluctance to set boundaries around bedtime. Gently but firmly, this therapist led us through behavioral changes we could make for ourselves that eventually resulted in equally epic behavioral changes in our preschooler. 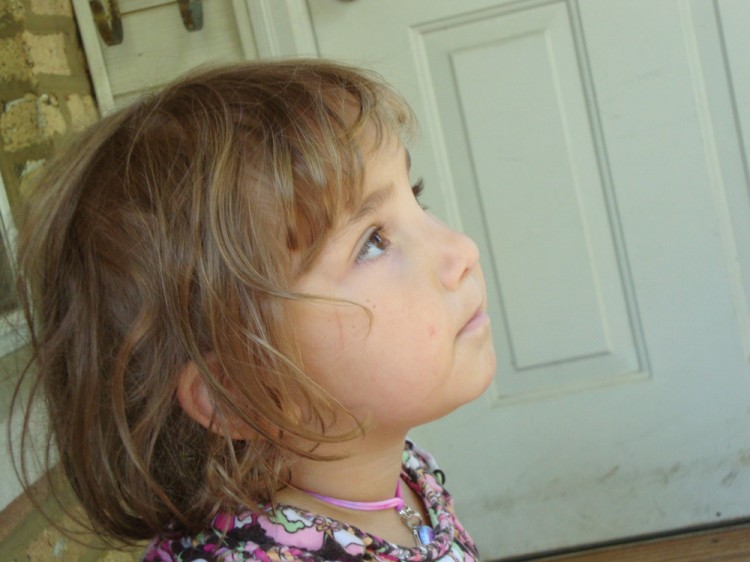 Does the fact that our changed behavior resulted in our 3-year-old-daughter changing her behavior mean it was our fault all along? Or was there something really wrong with her — a neurological issue — that she simply outgrew while we worked through our own issues?

I read to Sammi, as I had to her sister, all the time. We sat together, the three of us, as my finger pointed at the words, and I lent voices to characters and described the pictures. Her sister became a voracious reader. She did not.

Her intelligence seemed just as keen as her sister’s; she navigated the world easily, identified colors and sang songs from memory, but she did not read. She squeaked along in school just at or just under grade level, her frustration with decoding letters into words and words into sentences reaching an explosive level, mediated only slightly with each year of maturity.

I wondered if her inability to eat well was affecting her ability to concentrate. Myriad gastrointestinal issues had kept her from eating more than a few bites of food at a time for years, a schedule not easy to manage during the school day. I knew she was always under-fueled. Could this be keeping her from staying on task with reading?

Her teachers said no. They said she was fine, that some students take to reading later, that she was not flagged for reading specialist support.

However, after a second cardiac surgery at age 8 — to free her aorta, curling itself into her esophageal walls — finally gave her the ability to eat well and quickly, her reading abilities jumped several levels in a matter of months. Chapter books and series began to fill the shelves beside her bed. I need the next one, Mommy became a common phrase.

Does that mean her teachers were wrong? Did she need the better nutrition for her brain to accommodate the reading her grade level dictated, or is this a coincidence of that magical developmental step they said she’d take when she was ready?

She was born small and proportionate and never measured higher than the third percentile. It seemed we were always being promised that now she would grow: after her first cardiac surgery, her tonsillectomy and adenoidectomy, the diagnosis of gastrointestinal disease, another cardiac surgery.

They eventually started calling it idiopathic short stature instead of failure to thrive.

We refused the hormone therapy recommended by an endocrinologist to whom she was sent; it would have meant injections six days a week for almost nine years. Every night to say, “We don’t like your size; bend over,” was unthinkable — we said no and left her small.

Will she resent us for this someday? Or would she have resented the injections and their message even more?

It’s a black box, parenting, and even blacker when ill health complicates matters. We can all pretend the parenting books give us a map, but at best they’re a flashlight in a darkened gymnasium, giving us a narrow view only a few feet in front of us. We grope, flounder, children’s hands clutched tightly. We navigate by feel to a destination we can’t even see.

Debi is a mother of two daughters and blogs at www.swallowmysunshine.com. She has been published in Mamalode; Brain, Child Magazine; Role Reboot; The Manifest Station; Kveller; and ChicagoNow.