I want to talk about something uncomfortable. It’s come to my attention that many of the best among you are making a big mistake. I understand. I was too, two years ago.

My daughter has a rare genetic syndrome called Apert syndrome. When she was a baby, the plates in her skull fused together. That meant there was no room for her brain to grow, and she needed surgery right away to relieve pressure. Her head is larger than average. When she was born, her fingers and toes were fused together. She’s had the first surgery to separate her fingers, so now her thumb and pinkie are released.  She has a tracheotomy, so she cannot talk yet. Because of various complications, she’s spent a significant portion of her young life in the hospital. She’s developing muscles she needs to sit up on her own and to walk. She will do these things, but for now she’s in an adaptive chair. My beautiful girl stands out. 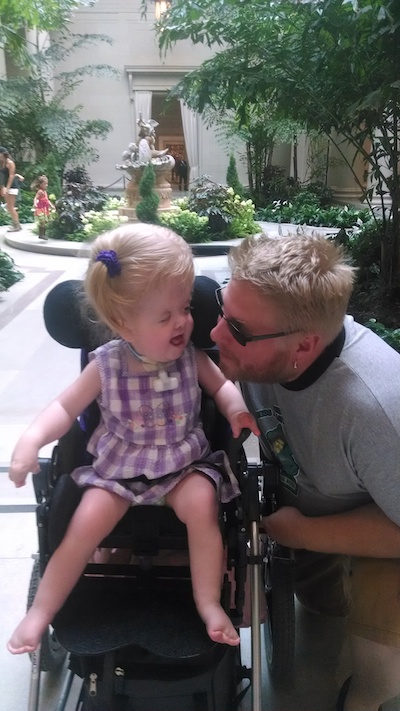 When I take my little girl out, we see all kinds of reactions, but the most natural, the most genuine, the most common, is the reaction we see from most kids. They look.  Some are puzzled. Some worried. The most adventurous of them ask questions. Almost all are curious.

Staring is rude. Pointing is rude. You know this. You’re embarrassed by your child because they’re pointing or staring. You shush your child and pull them away quickly, and I know you’re doing it to save my feelings, but my feelings are not so fragile and your action is doing real damage. You’re teaching your child to be afraid of what they don’t understand. I bet that most of you have a short conversation about diversity and not staring later; you’re good parents, after all. I would like to challenge you to have the conversation right there. Put a smile on. Say hello. Introduce yourself and your child. I will introduce myself and my children. Your child will ask questions. Likely the same questions you would want to ask, but you feel rude highlighting the differences, even when they’re obvious.

Here’s the thing: kids categorize. They need your help — and maybe mine — to make sure Sarah gets into the right category. They ask questions to figure out how things fit in their world. When you don’t let them ask their “rude” questions, you confirm my daughter as “other.” Believe it or not, every kid I’ve met who was allowed to ask as many “rude” questions as they liked, learned in just minutes to see my daughter as I see her. She is just a kid.

She loves lollipops. She laughs at her granddad. She has favorite music. She’s going to school this year. Her favorite color changes all the time. Today it was green. She has a younger sister and an older sister. Her favorite TV show is “Veggie Tales.” She’s Daddy’s punkin and Mommy’s sweet pea. She will absolutely charm you with her wide, blue eyes.

Imagine what my daughter sees. A sweet little face unable to look away from her. Pointing. Then an adult pulls the child away, consciously avoiding looking at her. Now imagine this happening over and over again. She’s a bright little girl, and this is hurtful.

At the very least you can model the behavior you wish your child had shown. Make eye contact with my daughter and smile. Anything less and it won’t matter what you say about diversity later. Anything less and your kid and my kid both get the same message from your embarrassment: My daughter is “other.” She’s something, not someone. The initial fear was confirmed. I will take rude questions over that hurt any day.

Kids are not mini adults. They’re astounding little people. They’re curious and open and full of wonder. You can teach them to see a child like them when they see my precious girl, who looks different and rides in a wheelchair. You can teach them to see her as a potential friend. Or, you can teach them to be afraid. It’s your choice. I won’t judge. Like I said, I was you and I didn’t know how to act either. You don’t have to be one of the people who love her — though honestly, you absolutely will if you give yourself half a chance — but please, be one of the people who see her. Teach your kids to see her. Please. 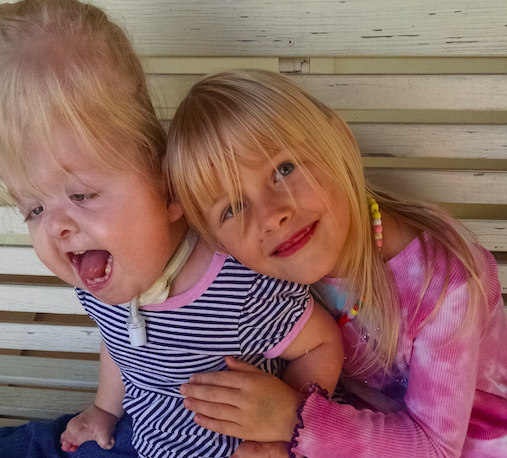