How to Make 500 Teenagers Understand Autism in 10 Minutes

It had been a tough couple of days.

I was ready to pack my son, Kirby, up and get the heck out of there.

Kirb had pushed me to the edge of fear and patience, and I was just done.

The scene was Boy Scout Camp Horseshoe, where Kirby and some of his buddies from an all-autism troop, BSA Troop 77 Malvern, Pennsylvania, were attending a few days of summer camp with their dads and alongside their neuro-typical brother Scouts. We weren’t doing the whole week, but we had a half dozen boys with autism sleeping in tents for four days on 1200 acres of wooded hillside encircled by the Octoraro Creek.

Kirby had “eloped” (run away) several times during our visit, and the last time he was missing for two hours. He’s too fast for me or any of the other dads to catch when he runs, and he just wasn’t listening. He’d been good for a long time. I was caught by surprise. I’d put on miles of trotting through woods, down trails and over roads looking for him. In the end of each of these elopements, one of the neuro-typical kids would find him and reunite us. It all worked out, but I was burnt out.

But this has been our experience partnering these two troops — the “typical” guys in Troop 7 look out for their brothers in Troop 77. And they can do it in a way we dads cannot. They have the energy, the speed and the stamina to look after a peer with autism that we dads just don’t have anymore. It makes us dads all feel old and inadequate, but that’s for another blog somewhere that whiny middle-age men read to commiserate. The point is, mixing up the typical and Scouts with autism works just like mixing the kids up in school classrooms does. The kids with autism can model typical behaviors and the typical kids become sensitive and usually it brings out the best in them as big brothers and sisters.

At Camp Horseshoe, every morning a Scoutmaster stands up and shares a “big idea” with the assembled 500 Scouts and adult leaders. No one wanted to do one the last day of the week, and I was “encouraged” to stand up and talk about autism. OK, I’m game.

My message that morning was simple:

It was a short speech. It didn’t last much more than five minutes including some breaks for clapping and getting the guys of the two troops to stand up to be seen.

Over the next 48 hours, I learned that this five minutes profoundly changed the nature of 500 kids. A proverbial pebble in the pond.

The first thing that happened was that the boys of Troop 7 were visibly proud that they’d been called out for being such great big brothers to the guys in 77.

And then, as the boys of Troop 77 maneuvered around camp that day, they were no longer invisible. Scouts of all stripes stopped to say hello and to shake a hand. The boys started to hold their heads higher.

That afternoon was the camp wide “Paul Bunyan Contest” where all of the troops in camp compete in stuff like climbing, sawing huge logs, making giant pancakes over a campfire and tug-of-war. Magically through the whole event, boys and troops created positive experiences for the Scouts with autism. No one told anyone to do this; they just became aware and did compassionate acts of kindness. At the end, a giant demonstration tug-of-war was staged and somehow the rag tag band of just five Scouts with autism bested the top tug-of-war troop.

This was the final day at camp and parents and siblings and relatives were everywhere. They’d come to witness the Paul Bunyan games and also the final troop marching on the parade grounds that evening. The troop marching each evening at Horseshoe is a camp tradition that’s survived since the first year in 1928. It’s competitive, and there’s a trophy awarded each day of camp for the troop with the best form.

Our brothers in Troop 7 were in a heated tie with their arch rivals of BSA Troop 14 from West Chester, Pennsylvania, on this final day. The tie would be decided tonight in front of all the parents, grandparents, brother, sisters. All week the boys with autism had watched the marching but had not wanted to participate, being content on the sidelines. Possibly it was the changed attitudes and behaviors all day at camp or possibly it was a whim, but the boys with autism announced to us dads that tonight they were going to march. Oh boy, here we go…

As a part of the evening tradition, the troops “call out” details about their troop’s disposition to the adult leaders across the field. How would we get that done? Our guys seldom said anything in more than a whisper if at all. And marching in formation? Come on.

As we dads were ruminating and musing out loud in camp about how to get Troop 77 marching that night, the boys of Troop 7 overheard us. They decided they could help. One of their Senior Patrol Leaders — the same guy that “calls cadence” for their march and who would be crucial to their besting their rivals in Troop 14 — would stand with the boys with autism during “call out” and help them before ducking out and sprinting back to his own duties with Troop 7.

OK, well, here we were — two dads and five Scouts with autism on the parade field and the rest of the Troop 77 dads on the line with the other adult leaders across the field. The boys were a motley looking group who struggled to stand still, but they were there ,and one could tell they were excited and proud.

Call out went just as planned with the Senior Patrol Leader coaching one of our more outspoken boys.

And then the marching started. We were set to go last so we wouldn’t disrupt the competitive troops ahead of us. And when the time came, we marched the route around the parade fields. A disorganized group by any measure, but the boys had their heads held high.

At the halfway point, the applause started. The camp was full of visitors. I wondered if the boys could keep it together with the uproar. They did. Their corners were rounded, and they were out of step, but they were there on the field with everyone else.

As we marched down the line of the adult leaders standing at attention, there was more than one tear shed, and when we passed the head of camp and the boys attempted a disorganized lopsided salute, a lot of us were having trouble seeing through wet eyes.

The boys marched off the field into a mass of new brothers from many troops who all cheered them, patted backs and shook hands.

That’d be a great story right there, but it got better. 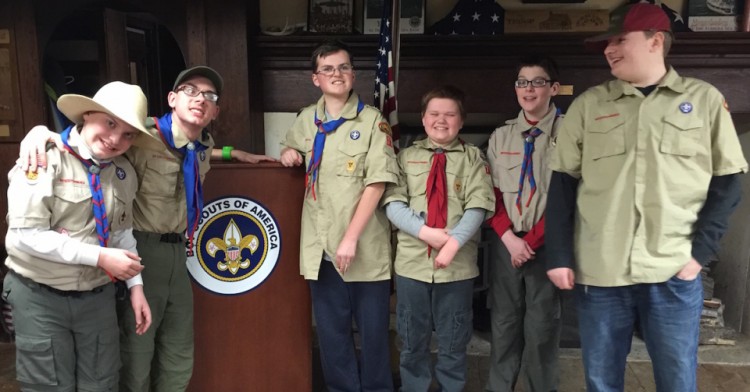 That night, the boys, parent, and visitors of Troop 7 and Troop 77 convened. There was a buzz, the boys of Troop 7 were sure they’d won marching and broken the tie with Troop 14. The annual feast was being enjoyed by scouts and visitors alike. And during that dinner an unusual thing happened.

One of the camp staff came down the walk. He was preceded by a Troop 7 Scout who heralded his forthcoming arrival to me. The boys worry when camp staff come around the sites, it creates a buzz. “Mr Wurts, Alex is coming down and he wants to talk to you.” And as Alex turned up, I noticed Scouts and adult leaders had a wary eye on the proceedings. Apparently so did Alex; he asked me to step up the path to talk in private.

What Alex told me blew me away.

He said the boys of Troop 7 had not won marching that night. This surprised me, as marching results are kept as secret as winners of The Oscars. I’m sure I looked perplexed. I’m new to Scouting, but I knew this was unprecedented. “So why are you telling me this?” I asked.

Alex then explained: Troop 7’s arch rivals, Troop 14, had won marching that night. They were the top of the heap for the week. But the “arch rival” boys of Troop 14 had come to the camp leadership and asked to be allowed to forfeit their win, leaving the rival tie behind. They said they’d like to present the marching award to the boys of Troop 77 for marching as best they could. Alex understood that kids with autism often don’t do well with surprises, and he wanted to tell me camp leadership had approved this unprecedented request and this would go down at breakfast the next morning. Wow. OK. Well then…

As I walked back into camp, all eyes were on me and Scoutmaster Rapp gave me a “come hither” look so I went over to chat with him. He asked about what Alex had wanted, and I told him in confidence. With a nod and a smile, he suggested that I also bring the two Senior Patrol Leaders of Troop 7 into the confidence. I spoke to them together and while they were visibly sad about losing, they were also visibly happy for their brothers in Troop 77.

And that’d be a great story right there, but it gets better so I’ll tell you some more…

The next morning at breakfast in the dining hall, the usual last breakfast excitement and chaos was unfolding. Troop 7 and their arch rivals from Troop 14 were chanting at each other with the typical valor of arch rivals. It was serious stuff suitable for a longstanding rivalry.

At awards time, the marching trophy award was to be presented. All was quiet. Troop 14 was called as the marching winners, and they came up to the podium with the trophy as usual. But then they stepped to the microphone and forfeited their win and called up the boys of Troop 77. They presented the trophy already embellished with a #77 to record the win.

The boys of 77 were truly excited, and they hoisted the trophy like they’d won the Super Bowl or the Stanley Cup. Everyone in the house was on their feet applauding; it was deafening. Many of our guys were covering their ears and smiling. Many adults were teared up again.

When breakfast was adjourned, the boys of Troop 7 were out the door fast. Their Senior Patrol Leaders formed them up quickly into patrol lines. When their arch rivals of Troop 14 came through those doors, they shook every hand and shared kind words. Arch rivals had become brothers.

And that’s how you create 500 autism-friendly teenagers with a 10-minute speech.