Jean Sharon Abbott lived more than three decades trapped inside her own body. She could barely move her arms or legs, and she needed help with even the simplest of tasks. Then, one day, when she was 33 years old, everything changed.

When Abbott was around 4 years old, she was diagnosed with spastic diplegia, a form of cerebral palsy. Despite the fact that MRIs and CAT scans didn’t show symptoms of the disorder, she seemed like a textbook case. Her neurologist was considered one of the best in the field; whenever Abbott sought a second opinion, she was assured her physician was the most qualified pediatric neurologist around.

So Abbott did what anyone in her position would do — she learned to live with it. She went to school near her home in Andover, Minnesota, she hung out with friends and she pursued her interests.

“I was a positive, optimistic, happy-go-lucky girl who just happened to be trapped in her own body due to cerebral palsy,” Abbott wrote in a blog for The Mighty. 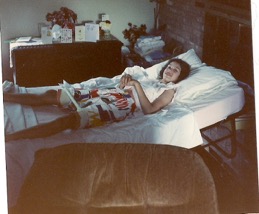 When she was 12, Abbott underwent a muscle transfer. Doctors detached the muscles from her hips and then reattached them so her knees wouldn’t hit each other when she tried to walk. She was in a full-body cast for a month, but her stride was slightly improved afterward.

“Things were always more difficult,” Abbott told The Mighty. “I couldn’t keep up with my older brothers. I never played sports or anything like that. It was challenging.” 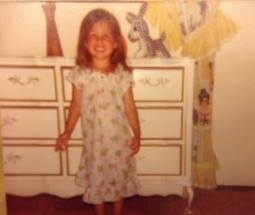 When she was in her late 20s, Abbott had a pump for medicine implanted in her body, but something went wrong, and she ended up overmedicated. She visited a doctor specializing in these pumps. This new doctor wasn’t convinced Abbott had cerebral palsy and recommended she see another neurologist.

After asking Abbott some questions, the new neurologist donned a huge smile on her face when she announced, “I think you have dopa-responsive dystonia.”

Basically, Abbott was told most of the symptoms she’d lived with her entire life — spastic, cramping muscles, weakness, etc. — would disappear with just a simple pill.

“I thought she was crazy, I really did,” Abbott told The Mighty. “I wasn’t even going to fill the prescription.”

After some persuasion from her husband, Abbott did fill the prescription and took her medication. Three hours later, she felt a little bit stronger. When her husband went to help her stand up from a chair that day, she surprisingly didn’t need his assistance. Still, she didn’t think much about it.

A day later, she was waiting for her children in their church parking lot. Her husband went to get the kids, and Abbott feared her legs wouldn’t support her on her own while she waited. She was fine.

“I hadn’t stood without help for a decade,” Abbott told The Mighty. “It was at that moment I realized the medication was working and my life had changed.”

“It was surreal,” Abbott told The Mighty. “It didn’t feel like this was actually possible because stuff like this just doesn’t happen to people. More often than not, they have what they have forever.”

It wasn’t long before the misdiagnosis was confirmed. Abbott was told as long as she took the L-dopa, she’d continue to live with only minimal symptoms, including cramping and balance issues.

The misdiagnosis led to countless unnecessary procedures and three decades of near immobility, but Abbott harbors no anger toward her pediatric neurologist.

“I’m not angry. Not in the least,” she told The Mighty. “When you live your whole life not able to do things, the day you start being able to do them, you can’t be anything but grateful.”

Abbott has no regrets about getting her correct diagnosis so late in life. She believes that if not for her disability, she would’ve gone to a different college, which means she would never have met her husband or had her children. 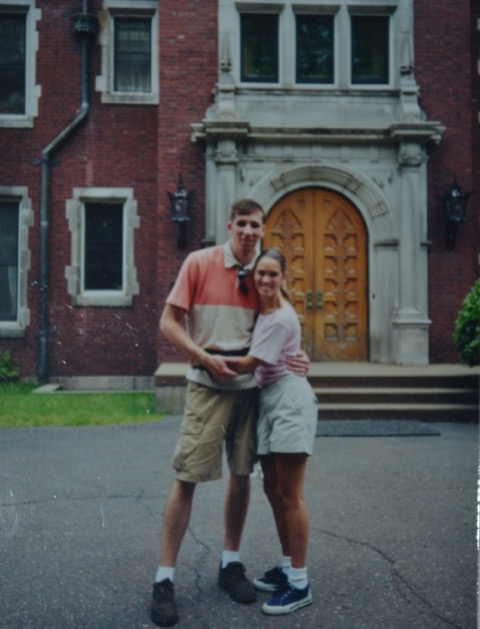 At her 10-year wedding anniversary, Abbott and her husband decided to retrace the steps of their first honeymoon — a 1,200 mile road trip around Lake Superior. The first time around, Abbott had to be carried to many of the lookout points and touristy spots. This time, two months after getting her correct diagnosis, she completed a 10-mile hike.

About eight months ago, Abbott decided that she wanted to record video of herself walking, both on and off her medication. She wanted to do it to help other people who are misdiagnosed to recognize the signs of DRD. Because she never liked how she looked on camera when she had difficulties with mobility, Abbott had no home video of herself before the DRD diagnosis. Weaning herself off the medicine would be the only way to demonstrate the difference.

The video below shows the drastic difference in Abbott’s mobility and body shape on and off the medication. Within just a few days, her legs became stiff and her back bowed. She was unable to continue the experiment as long as she wanted to because of the pain, but the transformation in just three days is still starkly evident.

Since publishing the video online in September 2014, Abbott has received several emails from people who told her they recognized the symptoms in themselves or a loved one after seeing it and were later correctly diagnosed with DRD.

“It is so rewarding,” Abbott told The Mighty. “If I can just help one person, it’ll be worth it.” 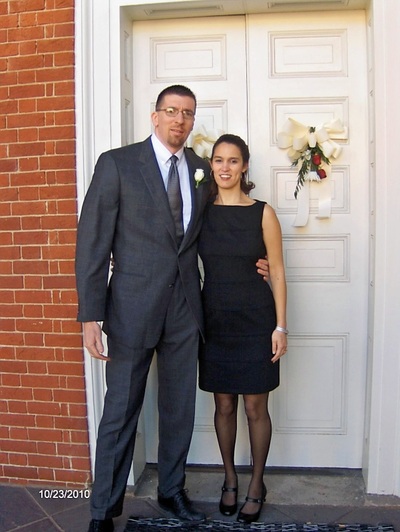 In the last five years, Abbott says her family has pushed her to experience things she never dreamed she’d be able to do — things as simple as getting dressed on her own, doing the family grocery shopping and riding a roller coaster. She remains grateful for every newfound ability and experience.

“I’ve always been a believer in everything happens for a reason,” she told The Mighty. “I think it helped me get through what I needed to get through, thinking that this is my journey. I think all of our challenges that we face in life, everything that we go though, leads us to who we are today. And I like who I am today.”

Hi, my name is pripri. I'm worried about my daughter who was diagnosed and over-medicated, due to over medicated she now suffers from something called "DYSTONIA to her Neck. Because of her struggle she is now turning to the street 'Excasty" for relief. I don't know how to help her aymore

Do you ever feel like every time you make any progress with your illness/disease you win a little then it knock you so much father back that you will never get back to were you were before?

So I have FND which means my nerves and brain function abdominally and communicate about as well as toddlers playing the telephone game. Add in a sprinkle of Tourettes Syndrome and Sensory Processeing Disorder, Migraine, Dyskinesia, Dystonia, and we are currently exploring epilepsy. All this results in me being confined to a wheelchair at least 85% of the time and need to be supervised if I am not. Along with eating difficulties, communication problems ect...

I have to go in for occupational therapy and physical therapy once a year to help me maintain quality of life. Sometimes we add speech or cognitive to spice things up if I need it . All these therapies are great and can act as kinda a filter on how to adapt my life to limitations and give some good ideas on how to make life easier within my limitations my body has placed on me. However it always feels like we make a little progress with them and once I "graduate" out of them (stop making progress usually after a the first 2 months) my body starts to decline again even though I countue to do my home programs (hey I want as much quality of life as I can get I mean I turn 20 in the fall I will take what I can get). This happens with me staring to fall more, my hands start to get weaker, I drop more weight, ect.

Every time. It seems like I am on this never ending loop of yes some progress. Whap out of no where I get worse ...

It's like this dance me and my body play. Oh you gonna work to try and get better. Sike now your worse enjoy the new wheels.

Around and around we continue this dance and we can't seem to figure out why this downward spiral keeps happening. Like I'm not gonna keep fighting for my quality of life but man would I like to stop this dance or at least hit pause for a bit.

It's exhausting. I just moved and my new pcp asked if I had made any progress on getting better and it hit me that no actually I keep getting worse and my symptoms keep getting more debilitating as time goes on. So now we redo all the testing and redo all the things to see if anything has changed...

Why am I here?

23 years ago this month I got into an auto accident that hurt me a great deal physically and would later progress into segmental Dystonia.

I feel very very ambivalent this month each year because I’m not sure why I survived. So I take it easy on myself and become pretty quiet.

We’ll see how it goes today…

13 people are talking about this

Hi, my name is cparker623. I’m new to The Mighty and look forward to sharing my story.

2 people are talking about this
Community Voices
R @moony1234

Hey, everyone! I have POTS but I also experience myoclonus and dystonia-like movements. They are much worse in the evening. The two neurologists I have seen have both suggested FND but the treatment is not working and I don’t have mental health problems. All of my symptoms improved with POTS treatment but relapsed after having COVID. Has anyone here experienced anything similar? Sorry for the length.

12 people are talking about this

#chatcat76 ﻿ I'm so excited...I found myself! Please don't reply to the text in the title as this is my home. I'm so sorry. I bet I'm the first one to make a mistake! The name of my closed group is Let's See the Patient. I'd love for you to join, as I'm getting all my writings together about my Chronic illnesses and I love to help make appointments go better. Soon, when I'm eligible, (I'm new, so I might not be "old" enough yet), I'd love to do "rooms". I'll get my story in asap. But I'm pausing for a flare to end!

Have a good ??? My husband forgot to tell me what day it is.

Hi, my name is Tryan553. I’m new to The Mighty and look forward to sharing my story.

1 person is talking about this

Hi, my name is edsmamab. I’m new to The Mighty and look forward to sharing my story.

4 people are talking about this
We use cookies and related technologies to help identify you and your devices, enhance your experience and conduct advertising and analysis. By choosing "Accept", or by using this site, you are agreeing to our use of cookies. You can read more about how The Mighty uses cookies in our Cookie Notice.
Manage Choices
Accept