What I Would Tell the Other Kids: A Note From a Special Needs Mom 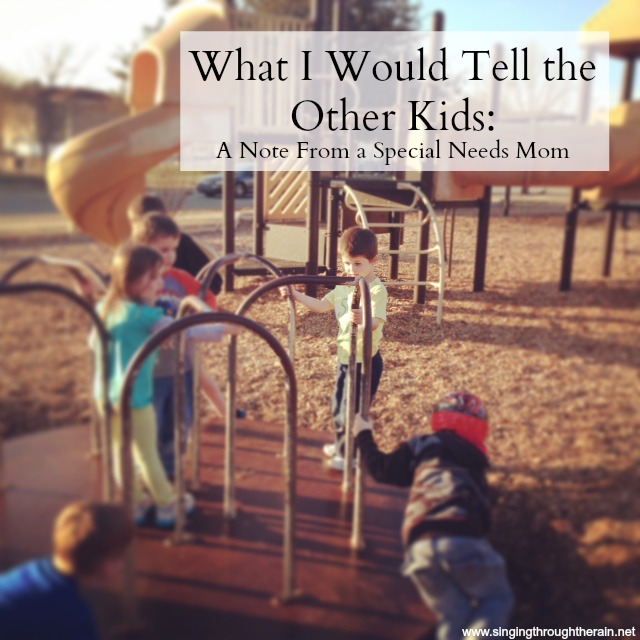 Several nights ago we took my son to the park just before dusk. It had been in the mid-60s out, nice weather for playing outside. My son, who is autistic, apraxic and who also has several other diagnoses, was having a blast following the other kids around and riding on the little merry-go-round.

Several times the other kids would ask him questions like, “What’s your name?” or “How old are you?” But in Adam’s excitement, he didn’t seem to hear or understand. He was happy to be running around and playing outdoors. Several times one of the other kids asked me what he was saying, and I had to interpret. The older he gets, the more we find ourselves trying to explain why he has difficulties talking.

Little kids don’t seem to understand. They will yell in his face over and over thinking that will get their questions answered or give him mean or weird looks because he’s different and in his own little world at times.

I know my son seems different, and I know he doesn’t talk as well as you do, but if you would be willing to give him a chance you would find that he’s the sweetest little boy you will ever know. He may seem to be hyper and excitable, but this is because he finds so much joy in the world around him.

If you would take the chance to get to know him, to slow down and try to understand him, you would love the few words he would have to say. Although you might not understand every word, he does understand you and loves to watch what you do. He absolutely loves other children and while he may come across a little rough around the edges, it’s really just his way of showing you he cares.

It may be annoying when he babbles the same few words over and over or when he copies everything you do, but he only does these things because he admires you. He learns from watching others and loves to do what they do too.

If you would only give my son a chance, he would make a great friend. He’s loyal and caring and truly loves the people around him. I hope you too will see him the way I do and decide that even though he may be a little different, he’s a great person to get to know better.

At times it’s hard to watch my son interact with others. Many do not understand him, and I worry that as he gets older, he will have an even harder time making friends.

I cannot always protect him from the hurts of this world and from others, but I can tell others about my son and hope one day they decide to give him a chance and see what an amazing little boy he truly is.

This post originally appeared on Singing Through the Rain.