They Told Me He’d Never Speak. Then They Heard Him Sing.

My son, DC, played baseball with the Challengers League (a Little League division for kids with physical and intellectual disabilities) from the time he was 5 until he aged out last year at 21.

The “official” Challengers field in town is located in front of the school he attended from birth to age 3, Early Intervention and kindergarten. Needless to say, he was in this building and with many of the same teachers for a good four or five years.

I have had my battles with the school system over the years, but none so ongoing as the battle over the need for speech therapy. It began in Early Intervention and continued on straight into high school. I believed sign language was absolutely necessary, that it might lessen his frustration level at not being able to communicate, and it did. But sign was not, in my mind, “speech therapy,” and it should not be considered as part of the speech therapy hours listed in his IEP.

I can’t tell you how many of these teachers told me he would never speak. One speech therapist, Barbara, actually told me that I was obsessed with DC speaking and told me, “You know, if he isn’t talking by now, he probably isn’t going to.” He was 5 at the time.

I did not give up on my battle with the school system, but I also did not want to waste any more time getting him the speech therapy he needed, so I got other speech evaluations and hired a private speech therapist. Liza was wonderful and made a great deal of progress with him. It took a few years to get to the point that the school would provide one-on-one speech therapy for DC. 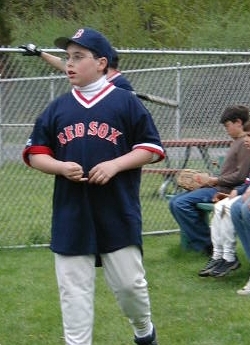 But back to baseball…

Our league used a PA system, and we always had a volunteer to announce the games. Each game opened with the Pledge of Allegiance. When I was president of the league, I decided every player should have a chance to be in the spotlight. Each week, two players were assigned as team captains and another player was assigned to do whatever they were capable of doing on the microphone.

Some led the pledge; some sang a patriotic song or just yelled, “Play ball!” If they were not verbal, they stood at attention at the flag or threw out the first pitch.

DC was about 10 years old on one particular game day when he was scheduled to be in the spotlight. Coincidently, all of the teachers from the Early Intervention Program had been attending a meeting at the school after hours and decided to come down to watch the game before heading home. Most of the players had been their students at one time or another.

Many of them had not seen DC in about four years. Just imagine the feeling I had watching DC to go to the mic and sing “America the Beautiful” as clear as a bell with all of those “professionals” who years earlier told me he would never speak, sitting right there in the stands! I could not have planned this better if I’d tried! Sometimes an “I told you so” is just good for the soul, even if you don’t actually say it out loud.

I had heard DC sing for many years at this point, but watching him sing, clear as a bell, in front of all of the people who once insisted that he would never talk, was like hearing him speak for the first time all over again. I felt as if my heart would burst. He was so proud of himself, and everyone there was proud of him. He lives for praise, and he received so much of it there on the field and afterwards at home when we talked about it. He was on cloud nine for days afterward.

As always, I told him just how proud I was of him. He sang beautifully, but I was just as proud of all of the work he had done to get himself that far. I really don’t know if he even remembers that he couldn’t speak when he was younger, but I do always remind him so he knows just how far he’s come.

A version of this post originally appeared on Taking It a Step at a Time – Autism.

The Mighty is asking its readers the following: Describe a time you saw your or your loved one’s disability, illness and/or disease through the eyes of someone else.  If you’d like to participate, please send a blog post to [email protected]. Please include a photo for the piece, a photo of yourself and 1-2 sentence bio.