Camden Eubank was excited to celebrate his 10th birthday on July 6, but his mom, Traci Eubank, was worried about throwing a party and having only a few people show up, according to her Facebook post.

Camden has childhood apraxia of speech (CAS), a motor speech disorder, and it’s difficult for him to make friends, his dad, Wayne Eubank told WDBJ.

But when his parents made a Facebook page announcing Camden’s water-balloon-fight party, just a week before his birthday, more than 5000 quickly liked it.

I know all kids should learn disappointment in life- but sometimes other kids are so cruel. Camden is turning 10 on...

Even more buzz came from Reddit.com, a the site nicknamed the “front page of the Internet.” The Eubanks don’t know who initially posted the party announcement to Reddit, but they were excited to see it get more than 4,000 upvotes. Reddit users from as near as Camden’s hometown in Roanoke, Virginia to as far as Singapore and Canada commented, hoping to make Camden’s birthday extra special. Cards and packages started arriving at the Eubank’s home soon after the post went up.

And somehow, the story got even better.

Cam is walking on air- he just got his Blake Shelton tickets and they also gave him an envelope full of money that he's...

The water balloon fight party attracted 300 guests, from family and friends to complete strangers who’d heard Camden’s story. The 10-year-old even got a special birthday wish from Senator Mark Warner:

Hi Camden, wanted to wish you a happy 10th birthday! I wish I could be there for the “ultimate water balloon fight” – sounds like a blast!

“With all the stuff that goes on in the world … you just can’t believe when something this good comes along,” Wayne Eubank told The Roanoke Times. “We just asked for a simple water battle and for some people to come to it. We got more than that.”

A Special thank you to Aarika @ https://www.facebook.com/technicolorcakes?fref=nf&pnref=story

Share
or  Copy Link
Link copied to clipboard.
Be first
201 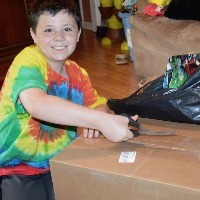