It was our first visit to Kalahari, an indoor waterpark. I wasn’t sure what to expect or if the trip would be worthwhile. But it was because I had some true a-ha moments, and I never imagined that some of my most powerful insights regarding independence and raising a child would come during a trip to a waterpark.

Evan is 4 1/2 and has Down syndrome, and I’m sometimes guilty of hovering, worrying and what I call “over helping” him. Though I can’t say I’m through with my over helping, I can say that after this trip, I will encourage him to try more new things, even if I have a little bit of discomfort in doing so. This is, after all, a journey that our family is on together.

When I first arrived at the waterpark, I was thrilled there were so many areas for little kids. But when I looked around, I also saw a lot of things that scared me, areas within the kid areas that I thought were more advanced than Evan’s physical abilities. I wondered just how I would balance Evan’s enjoyment of the park with my ability to contain him in the areas I thought were safe. But the more time I spent in that waterpark, the more I started to understand my son, his abilities and what I needed to do to support his independence.

Here’s what I learned:

1. At first glance, a new environment can be daunting.

It was — for me, not for my son. He was comfortable immediately, and as I observed his comfort, my discomfort eased.

2. Shadow your child, but scale back your support as they outgrow their need for it.

During the first part of our first day at the waterpark, I followed Evan closely as he climbed the steps for the children’s waterpark slides and made sure someone was at the bottom waiting for him as he exited the slide. As we progressed through the day, I realized he didn’t need someone for the climb up and only needed someone to be at the bottom to help him if he got an unexpected mouth/nose full of water. I began letting him climb to the slides by himself. 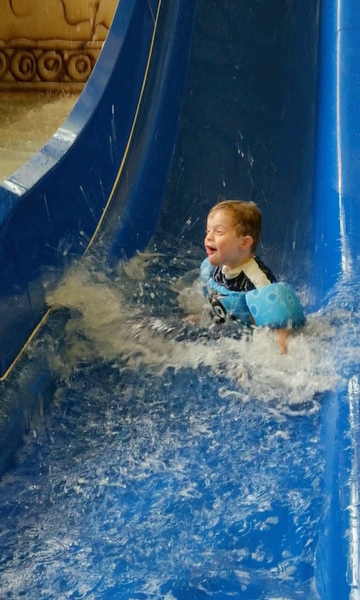 The slides at the waterpark in the toddler area had different degrees of difficulty, and Evan often returned to the slides he was familiar with. As using those slides became second nature, I stepped outside my comfort zone a bit and pushed him to try slides with increasing difficulty. Most of the time, he did better than I expected.

4. A first-time failure should not preclude trying again.

One of the more advanced slides took Evan by surprise. He emerged backwards, went underwater, came up coughing and briefly cried. My first instinct was to redirect him somewhere I considered safe. I gave him a hug, and he looked at me and said, “Mommy, again.” When he came out the second time, he nailed it and didn’t take in water.

5. Making your own choices is a powerful confidence builder.

When I stopped hovering over my son, he climbed the stairs to the toddler water slides and delighted in making choices about the slides he wanted to ride. He would announce the color of the slide he chose to ride, and as he did so, he walked taller and was proud of himself.

When I first looked around the waterpark, I looked upon the park with trepidation. But throughout our two-day experience, Evan’s skills grew, and the features of the park that originally scared me were things that Evan mastered by the end of our brief stay. If I’d held to my original assessment, Evan likely would’ve only experienced two to three slides versus the 10 or so that he tried.

I learned so much during an overnight stay and two days in the waterpark, and I never expected our stay to provide such life lessons. I am forever grateful that we chose to go instead of foregoing the experience.