On August 10, employees at United Cerebral Palsy (UCP), an organization that supports children and adults with disabilities, arrived at the center in Hanford, California, to find the organization’s play set had been stolen, ABC News reported.

Children who attend the UCP center relied heavily on the outdoor play equipment for occupational and physical therapy as well as for building social skills, Jennifer Thornberg, the organization’s family coordinator, told the outlet.

However, the discouraging news quickly turned positive thanks to the Hanford community. Once local police officers heard about the burglary, they stepped in to help. The Hanford police department began taking donations to purchase new play equipment for the center. Together, the community raised enough money to purchase new play sets, UCP of Central California wrote on its Facebook page.

The Hanford police department did more than just fundraise for the new playground. On August 28, the officers arrived at UCP and assembled the equipment themselves.

“You see a lot of bad things on a daily basis,” Hanford police officer Mark Carrillo told ABC News in the video below. “You can’t fix them all, but this one needed to be fixed.”

Learn more about the officers’ heartwarming show of support in the video below.

Feature photo via the UCP of Central California Facebook page.

Share
or  Copy Link
Link copied to clipboard.
Be first
690 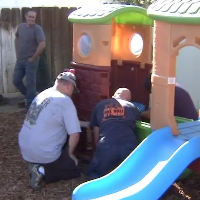