My 19-year-old son, Noah, was diagnosed with Asperger’s syndrome when he was 3, and I’ve felt uncertain about how much to push him out of his comfort zone ever since.

Years ago, when the other 5-year-old kids in the neighborhood were riding bikes, our son was content with reading books and playing Pokemon. When Noah was sitting on his bike, he would grab onto my husband or me, clench his jaw and tell us he was done 30 seconds after getting on.

I understood how impossible bike riding seemed to Noah. What was fun for other kids was not fun for him. But as Noah got older, I was concerned that he’d lose opportunities to play with friends if he didn’t learn how to ride. And so during the spring before middle school began, we tried one more time.

Finally, he could see the benefit of learning to ride. He’d be able to get away from his annoying parents more easily. He could be with his friends. He could have more freedom and independence. At the same time, we understood the immense obstacles that stood in his way. He didn’t feel comfortable or stable when both of his feet weren’t on the ground. He had to think through each movement before doing it and would look down at his feet when he started to pedal. It was hard for him to pay attention to his environment; he might encounter potholes, stop signs and car doors in his path. 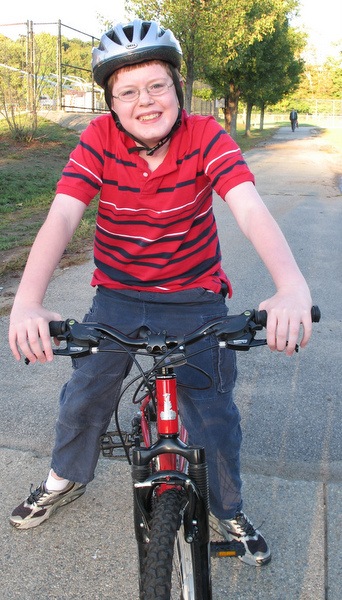 So we came up with a plan. We made a list of all the small steps Noah would need to take in order to ride his bike independently. We took away the pressure of having to learn by a certain date or age. We let him know he could set the pace and duration of training; he might work on one step for four weeks and another for four days. And we celebrated each new success no matter how small it might seem to others. After four months of practicing for up to 10 minutes each day, Noah got on his bike and rode down the hill from our house and I literally jumped for joy.

I have tremendous respect for the amount of effort my son has to expend every day to make sense of the world. Sometimes he’s exhausted and just wants to do what makes him feel calm and safe — being with good friends, playing with the dog, reading and playing video games. When he’s had enough time to do activities of his choosing, he’s more able to be flexible because he doesn’t feel as if he’s on high alert. And that’s when we can encourage him to try new things.

What we consider before gently pushing our son out of his comfort zone:

1. Is this something he wants to do?

If he’s motivated and interested, we can push a bit more. If he’s completely uninterested, we have to find a reason that resonates with him.

2. Is this something he needs to do?

He didn’t need to learn to ride a bike when he was 5. But by middle school, it became more important.

3. Does he have an underdeveloped skill that would help him reach a personal goal?

Noah wants to write a book but feels stuck. We talk about how people structure unstructured time and break down large goals into manageable pieces. We don’t tell him what to do but discuss what he thinks might be worth trying.

We don’t push when Noah has already hit his limit. We try to help him remember how to lower his stress and anxiety and connect him to the support and structure that works for him.

It helps me to remember that my son is on his own timetable. Comparing him to his peers leads me to push him for the wrong reasons. I can accept him for who he is and support him to try new things.

As I wrote in Parenting without Panic, “We need to provide just enough of a challenge to stretch our child’s abilities in a safe environment. Too much challenge and our children feel they are failures. Too little and they assume we don’t believe they are capable of much.”

Share
or  Copy Link
Link copied to clipboard.
Be first
141