We dressed our son as a Texas A&M football player last Halloween, complete with jersey, football and eye black. The outfit wasn’t surprising, as we are a family of numerous Aggie grads. However, the real reason for his costume was underneath the uniform. 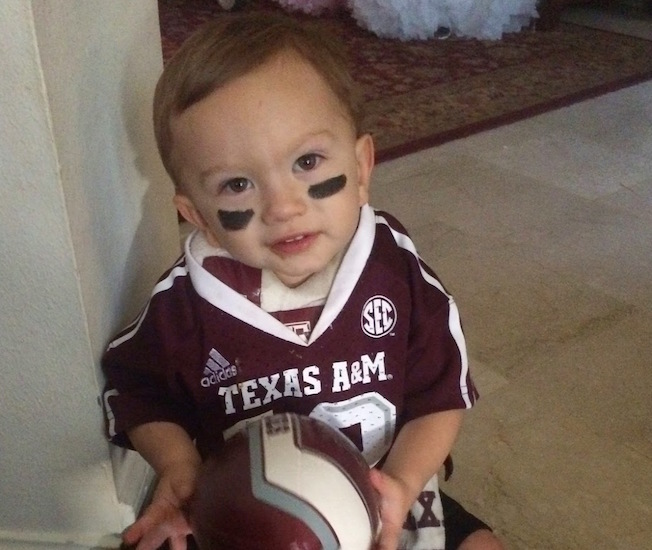 The majority of our friends, acquaintances and people we come in contact with ask kind-hearted questions about our son, make a point to include him in play opportunities and genuinely accept his challenges and differences without making him feel as though he’s different. But we will occasionally cross paths with children who poke him in the chest and ask what he’s wearing or intentionally push him down because he appears different. My husband and I try to use these opportunities to teach our own children how to handle confrontation, extend a hand of kindness and show compassion to the world.

Recently, our son had his cast removed for a cast break, allowing him to enjoy some water time and give his chest cavity an opportunity to develop. He was able to swim for the first time in 17 months. He’s been in cast for half of his life without exposure to water, so this new sense of freedom has been such a joy-filled experience for our family. The beginning of his cast removal time coincided with a visit to a resort and pool time with friends and family.

One afternoon, Hunter played in the pool and became so tired that I thought he would fall asleep sitting in the water. We decided to take him and his sister back to our room to rest. When Hunter realized we were leaving the pool, he began throwing the worst fit I’ve ever seen. The kind of fit that’s embarrassing and makes you want to get behind closed doors as soon as possible. Realistically, this has probably happened to all parents at one point or another and is a part of toddlerhood.

Of course, the elevator was conveniently broken, so my husband and I had to carry the stroller up a set a stairs. As we began to ascend the stairs, our son decided he was going to try to jump out of the stroller and run back to the pool. I grabbed him as he was about to jump, put him under my left arm and I used my right arm to lift the stroller. There we were in the middle of the resort hallway with our 2-year-old son screaming and kicking and our 7-month-old daughter crying, just trying to make it back to our room without utter embarrassment or loss of life.

Most fellow parents would probably look on with support and offer words of understanding, but we were greeted by an appalling look of disgust by an older woman and her daughter who had also just come from the pool. Their piercing eyes kept meeting ours as we quickly tried to make our way down the hallway. She suggested we use the elevator, so I told her it was broken. The woman offered no kind words or looks of understanding. Yes, our child was throwing a fit in a resort hallway. Yes, he was loudly kicking and screaming. Why was he throwing a temper tantrum? He was throwing a tantrum because we’d left the water he had been deprived of for 17 months because of his health condition.

This scenario is not limited to our son and his condition; it can happen to any parent with children. At the time, I was focused on our children and opted not to say anything to the woman. Looking back, I wish I would’ve shared our son’s story with her. I should’ve told her that perception can be positive or negative. For example, a farmer sees a field of sunflowers as weeds, but others see them as beautiful flowers. What she saw as a toddler screaming out of control was actually a child dealing with the transition of learning how to adapt to life outside of a cast and play in the water.

For those who might find themselves in a similar scenario, remember, a situation is not always as it appears to be and people are fighting battles you may not understand. We should share kind words and have a heart of compassion for all rather than eyes of judgment.

As for our son, we will continue to share his story in hopes that it will encourage others. When people think he’s wearing football pads, we’ll just smile because we know the challenges he has overcome and those he continues to face, and we know how truly strong he is.

The Mighty is asking the following: Describe a moment you were met with extreme negativity or adversity related to your disability and/or disease (or a loved one’s) and why you were proud of your response — or how you wish you could’ve responded. If you’d like to participate, please send a blog post to [email protected] Please include a photo for the piece, a photo of yourself and 1-2 sentence bio. Check out our Share Your Story page for more about our submission guidelines.

Share
or  Copy Link
Link copied to clipboard.
Be first
385