What My Mental Illness Means to Me

For me mental illness is hard.

It’s feeling like I should be able to get over this. It’s doubting its existence — maybe I’m just a wimp, maybe I’m just using it as an excuse. It’s being tired of fighting, yet going through another day. It’s getting up each morning when I just want to stay in bed. It’s when making it through the day takes everything I have — leaving me with nothing left for more — depleted and empty. It’s wanting to change but feeing stuck and unmotivated. It’s feeling irritated and angry with myself, other people, the world. It’s part of me wanting to yell, scream, throw things and cry while the another part of me just wants to curl up and avoid real life. It’s discouragement and frustration. It’s feeling incapable of doing anything about it.

For me, mental illness is racing thoughts and a racing heartbeat. It’s knowing I’m not thinking rationally but feeling powerless to change it. It’s feelings and panic taking over. It’s my brain getting stuck — a hamster wheel running at 80 m.p.h. and getting nowhere. It’s putting on a happy face because it’s socially acceptable to have a headache or sore throat, but no one wants to hear about anxiety, depression, panic, OCD. It’s closing my office door to cry because everything is so overwhelming. It’s putting my head on my desk and trying to get my heart rate under 100 beats per minute. It’s waking up first thing in the morning feeling over-caffeinated and shaky for no good reason. Maybe the sky is too blue, maybe the grass is too green, who knows? It’s sometimes wishing something would actually happen so that I could rationalize how I feel and have a “good reason” for why today is so hard. It’s crying in my car and not knowing why, but being unable to stop. It’s praying but feeling dry and empty. It’s lonely. It’s shame. It’s guilt. It’s feeling like everything is spinning out of control.

For me, mental illness means hard work. It’s therapy and thought processing. It’s talking about painful, hard things and choosing to take steps to heal. It’s reaching out when I just want to isolate. It’s pushing myself to stay involved and not just letting life pass me by. It’s fighting with negative, self-destructive thoughts. It’s trying to exercise when it’s the last thing I want to do. It’s eating when I don’t feel like it and not eating when it’s just for comfort. It’s not drinking on bad days because I know that will make things worse. It’s watching caffeine intake because even though I’m so dang tired from the anxiety and depression, the extra caffeine will make me more anxious. It’s trying to pray, worship and serve even when my heart isn’t in it, when I know the discipline is good but I don’t feel that love, connection and peace. It’s taking one day at a time, finding things to be grateful for. It’s having good moments and being able to enjoy it — fighting the urge to worry about what bad thing will happen next, what the next minute, hour, day will bring. It’s ignoring the “what if’s” and staying in the present.

For me, mental illness is the choice each day to get up and walk in faith. It’s declaring God has me here for a reason. 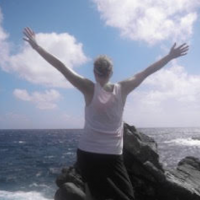