Autism Speaks recently shared one of my blog posts, “What My Kid With Autism Wants You to Know About Him.” Well, actually, it was more like my son Ryan’s blog post since it was his voice and his words. There were a lot of lovely comments from parents who “got it.” They understood autism doesn’t define their children and so much more lies beneath that label. There was one comment, though, that pierced my heart: “My son was diagnosed today. I needed to read this.”

As I read this mother’s words on my blog post, I felt the same kick in the stomach, the same tears searing the back of my eyes and the same fear I felt all those years ago. Like. It. Was. Yesterday.

I wanted to reach out through Facebook and hug this mom — Can you work on that, Zuckerberg? — and tell her I know the heartache, the uncertainty and the fear she was feeling at that precise moment. I wanted to tell her as long as she loves him, as long as she advocates for him, as long as she accepts him, he will be OK. So I told her all those things. I tried to help her understand, but I knew my words would bounce off her shattered heart like a pogo stick.

When you’re told your child has autism, the kind, compassionate doctor may tell you, “Your son is the same little boy he was before you walked through that door.” But what they don’t tell you is you may not be the same person.

Something inside you shifts. You worry the dreams you had for your child may change. You wonder how you will afford all that’s necessary for him while you’re here and after you’re gone. But mostly, there’s the need for more: more information, more education, more answers, more patience, more awareness, more therapies, more advocacy and more love. More than you ever planned.

I get that now. But a mom who just recently had to process the words, “Your child has autism,” may not. And the difference between the two of us is I’m “here” and she’s “there.”

When I was there, I researched the words “cure,” “alternative therapies,” “treatment for autism” and “gluten-free and casein-free diets” In the end, we spent thousands of dollars on a listening program as a form of therapy to hopefully reduce the impact autism would have on Ryan’s life.

When I was there, I would watch him spin the wheels of his dump truck and beg him to actually play with his truck.

When I was there, I would watch him push the same button on an electronic toy over and over again then mimic the same noise to a tee and beg him nicely to stop.

When I was there, I worried so much about the boy who was yet to be that there were moments and days I missed the boy he was.

When I was there, I focused so much on trying to help him conform, to help him fit in and be like “all the rest” that I didn’t see how amazing his uniqueness was.

When I was there, I tried to stop his constant mimicking of television shows and video games and didn’t listen to the incredible way he was trying to communicate with me.

When I was there, I saw the label but didn’t see him and so I wanted more.

Being there is hard. I wish I could show that mom how much better it is when she gets here. I wish I could tell her that her need for more still exists, but it takes on an entirely new meaning.

Now that I’m here, I no longer look for more cures or more causes. I accept my son’s diversity and applaud every single step he takes, regardless of how different those steps may look.

Now that I’m here, I no longer try and get my son to conform. I give him the support he needs to feel proud about his differences and to feel more confident about who he is, while trying to help him understand what is acceptable and appropriate in a “neurotypical society” without ever making him feel less.

Now that I’m here, I no longer try and get my son to stop his unique way of communicating with me. Instead, I try and find more ways to communicate in his language, which always brings a smile, while still providing him the tools he needs to communicate in a way the world will understand him.

Now that I’m here, I give my son hope that one day more people will accept his differences and that those differences won’t really be so different. One day, the world will see more Ryan and less autism.

Now that I’m here, I still worry, I still wonder and I still have my “kick in the gut” moments. But those moments are so much fewer now that I’m “here” and not “there.” I’ve had more time to accept his differences and more time to understand his incredible mind. But mostly I’ve had more time to watch my son surpass all my fears and worries and show me there’s so much more to Ryan than autism. I’ve accepted the moment that brought me more pain than I could have imagined when I heard the words, “Ryan has autism.” But those words don’t define him or his future.

To the mom who is “there,” I know it’s hard because you need more: more time, more acceptance, more progress, more understanding and more awareness. You have yet to see the progress. You have yet to see all the “more” that he or she will do. And I know getting from “there” to “here” is different for all of us, but knowing we all get here together, makes the journey a little less lonely and a lot more appreciated. 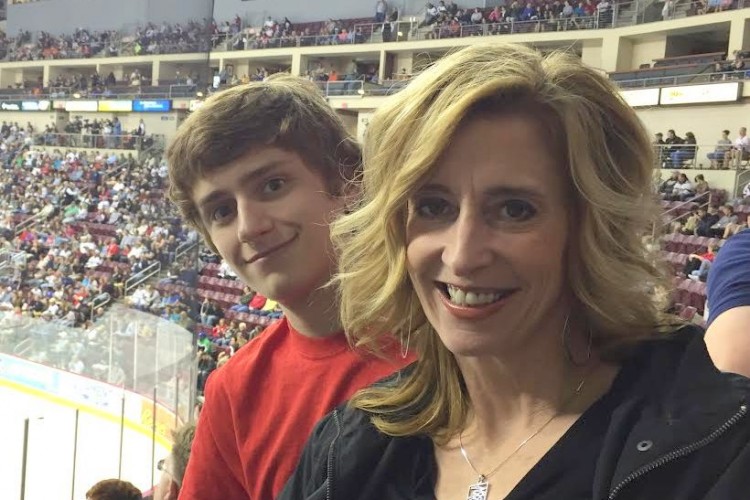