In Powerful Moment, Cara Delevingne Gets Real About Depression

Cara Delevingne’s superstardom spans across genres. From high-fashion to summer Blockbusters, she’s a face we’ve been seeing a lot of lately.

When asked about her life before her modeling career at Friday’s Women in the World summit in London, the model and actor politely pushed away the question to quickly summarize what she was really there to say:

“In our culture, we are told if we’re beautiful, if we’re skinny, if we’re successful, famous, fit-in, if everyone loves us, that we’ll be happy. But that’s not entirely true,” she told actor Rupert Everett, interviewing her in the video below.

Delevingne said she started experiencing depression when she was 15. “I wanted the world to swallow me up,” she said.

After being taken out of school, going to therapy and starting antidepressants, she continued schooling until she eventually quit to start modeling at age 17. Although the young model’s rise to fame happened suddenly, and from the outside, seamlessly, she was still dealing with mental health issues that weren’t being addressed.

“[In my] external life, I couldn’t be luckier or more blessed,” the 23-year-old said in the interview. “But internal battles were going on. I also felt like I never deserved [the fame]. That I was living someone else’s dream.”

She also read aloud a poem she’d written last year, at a time she says she “wasn’t very happy”:

Who am I? Who am I trying to be? Not myself. Anyone but myself. Living in a fantasy to bury the reality. Making myself the mystery. A strong facade disguising the misery. Empty, but beyond the point of emptiness. Full to the brim of fake confidence. A guard that will never be broken, because it broke a long time ago. I’m hurting, but don’t tell anyone. No one needs to know. Don’t show or you failed. Always OK, always fine, always on show. The show must go on. It will never stop. The show must not go on. But I know it will. I give up. I give up giving up. I am lost. I don’t need to be saved, I need to be found.

When asked what messages Delevingne was planning on sending to her fans — and over 4 million Twitter followers — she said she wanted young girls to embrace themselves for who they are.

“Mental illness and depression is not something to be ashamed of,” she said. “And I wish at that time I had realized other people go through it, that I could talk to other people. You’re not alone, you’re not an alien. My message has always been to accept yourself no matter what.”

You can watch the full interview below. Delevingne starts reading her poem at 2:20:

Share
or  Copy Link
Link copied to clipboard.
Be first
125 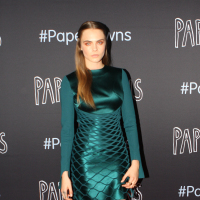