For many, obsessive compulsive disorder is synonymous with hand-washing, organizing, color-coding and cleaning. And while associating OCD with these habits isn’t exactly wrong, it leaves out an important part of the picture. It’s easy to look at these behaviors and think, Oh, that’s not so bad. I would love to keep my room so clean. Or, Oh, I hate when my room is a mess. I’m so OCD too.

But what you don’t see, and what puts the “D” in OCD, are the thought processes behind the compulsive actions. People with OCD don’t organize because it brings them joy. They don’t clean because it’s one of their hobbies. And sometimes, people with OCD don’t clean or organize at all. OCD manifests itself in so many different ways, and likening it to a quirk can be hurtful for those who live with it every day.

So, with the help of the International OCD Foundation, The Mighty asked people with OCD to explain what it’s really like.

Here’s what it’s like to have OCD, from people who live with it:

1. “OCD is like having a bully stuck inside your head and nobody else can see it.” — Krissy McDermott 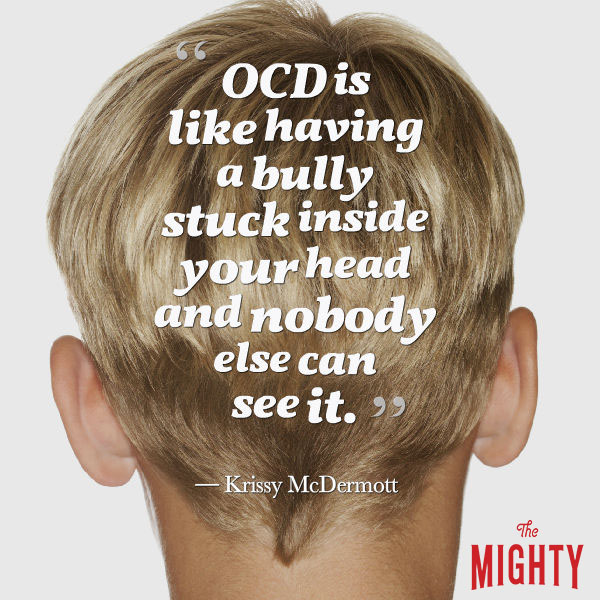 2. “You lose time. You lose entire blocks of your day to obsessive thoughts or actions. I spend so much time finishing songs in my car before I can get out or redoing my entire shower routine because I lost count of how many times I scrubbed my left arm.” — Kelly Hill

3. “[It’s] like that song that plays over and over in your head, only you can’t get rid of it.”  — Kimberly Matthews-Cifra

4. “It’s like having mental hiccups. Mostly, we can function despite the ‘hiccups,’ but we’re exhausted attempting to carry on as if they didn’t exist.” — Sheila Cavanaugh 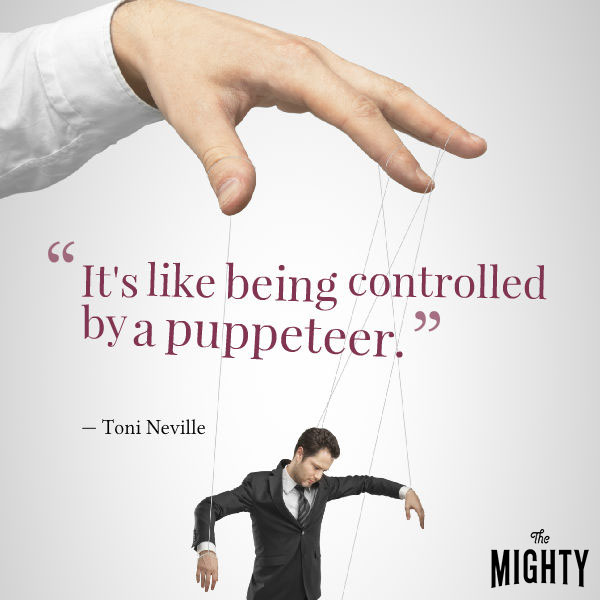 6. “A physical sensation crawls up my arm as I avoid compulsions. But if I complete it, the world resets itself for a moment like everything will be just fine. But only for a moment.” —  Mardy M. Berlinger

7. “For me, it’s like someone else has control of your brain. Like you’re being forced to do an endless number of completely random, pointless tasks you don’t want to do. It’s so exhausting and emotionally draining — like your brain needs an off switch!” — Clarissa Chay

8. “It’s like a broken machine. Thoughts go in your head, get stuck and keep going around and around.” —  Megan Flynn 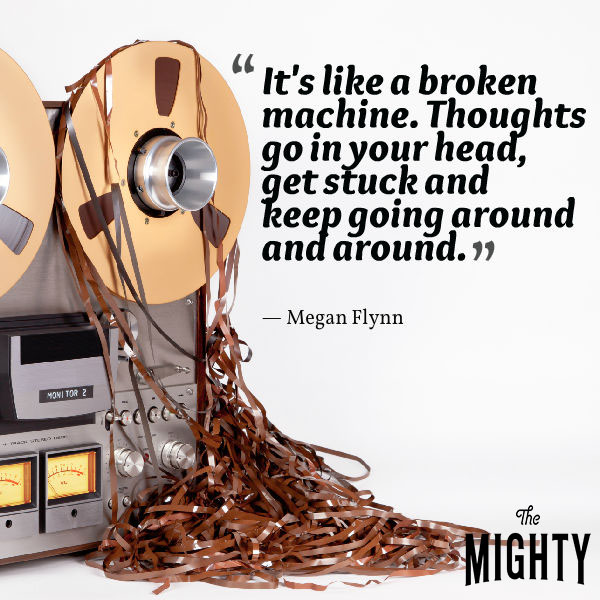 9. “Ever seen ‘Inside Out’? With OCD, it’s like Doubt has it’s own control console.” — Josey Eloy Franco

10. “It can look like still waters on the outside while a hurricane is swirling in your mind.” — Marcie Barber Phares

11. “Imagine all your worst thoughts as a soundtrack running through your mind 24/7, day after day.” — Adam Walker Cleveland 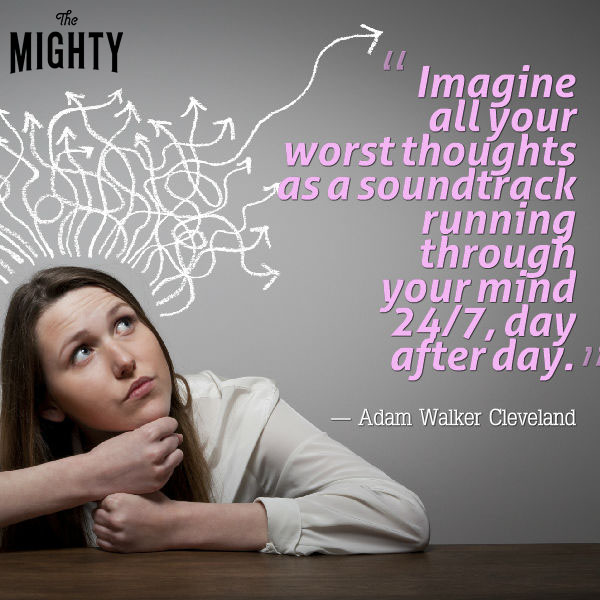 12. “Picture standing in a room filled with flies and pouring a bottle of syrup over yourself. The flies constantly swarm about you, buzzing around your head and in your face. You swat and swat, but they keep coming. The flies are like obsessional thoughts — you can’t stop them, you just have to fend them off. The swatting is like compulsions — you can’t resist the urge to do it, even though you know it won’t really keep the flies at bay more than for a brief moment.” — Cheryl Little Sutton

13. “For me, it’s an ever-present nagging feeling that something is just ‘not right.’ I can never really, truly ‘make it right.’ I have to learn to live with the all-consuming feeling of mental discomfort.” — Laura McCarthy

14. “It’s like looking through a magnifying glass that only picks up on the potentially dangerous, harmful and scary.” — Laura 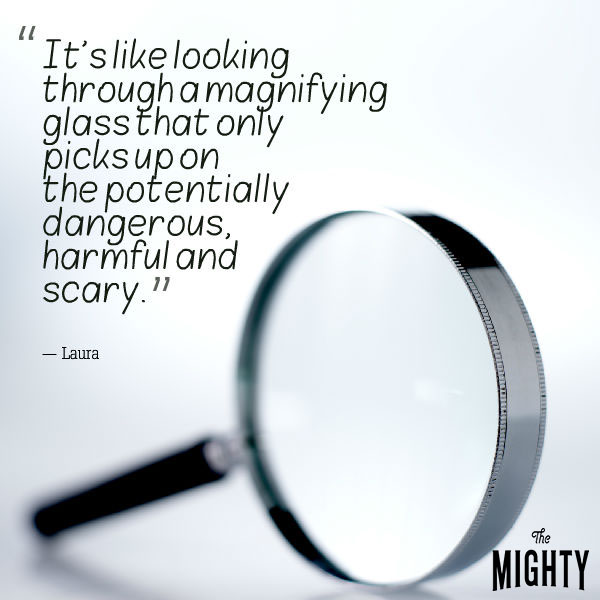 16. “It’s like listening to a CD with an invisible scratch.” — Penny Hare

17. “It’s like you have two brains — a rational brain and an irrational brain. And they’re constantly fighting.” — Emilie Ford 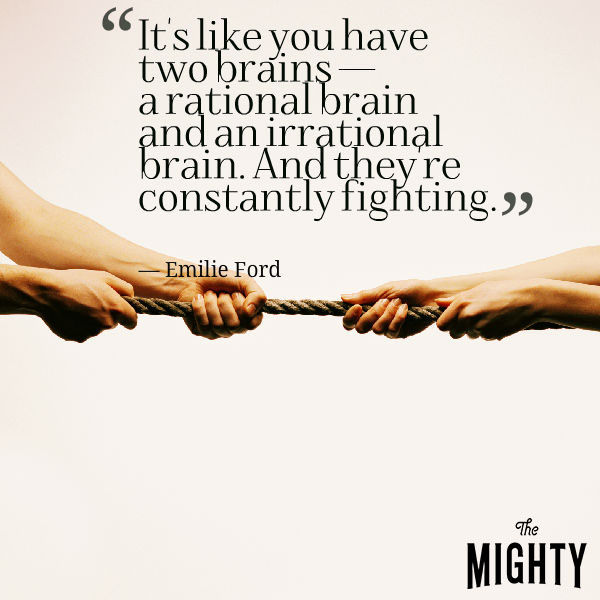 *Quotes have been edited for length and clarity.

Related: 5 Times the Internet Got OCD Wrong — and Why It Matters