When I Read the R-Word in a Best-Selling Author’s Book, I Had to Speak Up

I recently stopped reading “Who Do You Love” — the New York Times best-selling novel by Jennifer Weiner — because the author used the R-word in the book. I had a big long rant on my own little blog, and when I published the post, I felt very pleased with myself.

After a few days, I realized I was still mad. It’s like when someone says something you disagree with, and instead of speaking up, you walk away and think about all the things you wish you had said out loud.

So I decided to tweet the author to let her know I was affected by her choice of words and sent her my post. My tweet didn’t ask for much:

@jenniferweiner I really loved Who do you love…until I hit the R-word. Please reconsider using it in future. http://t.co/eCP0qush3F

I attached the blog post and figured that would be that. At least I went right to the source and let her know how I felt. To my surprise, not only did she tweet back, she tweeted out the passage in the book, which takes place in 1993, and asked her Twitter followers if they felt she had done anything wrong.

This is the passage in question. Scene takes place in ’93. Did I blow it? pic.twitter.com/2LolPQx4jV — Jennifer Weiner (@jenniferweiner) October 11, 2015

They responded in droves. Almost all of them felt like I was being too sensitive, and I was asking for history to be rewritten. The word wasn’t an insult to them. One person even posted this comment on my blog: “The bandwagons people jump on as a result of their offspring.”

My response to her was simple. The word is an insult (and it was back in 1993, too), and that I wasn’t the only one who thought so. I also sent her a link to R-word.org and a link to a Time.com story about John Green’s apology for using the R-word in “Paper Towns.”

After the trolls went on for a while, other people who agreed with me started to join the conversation. Siblings, friends and other parents of individuals with intellectual disabilities jumped in with their take on why a writer in 2015 shouldn’t use the word — even in the context of 1993. They cited experiences, blog posts and videos they had created to help the “Spread the Word to End the Word” campaign. It was very inspiring that one little tweet could rally such thoughtful and heartfelt responses. It made me glad I spoke up despite all the opposing tweets.

And then Jennifer Weiner tweeted this:

@mommydoCA Which makes sense. I can rewrite in a way that shows that girls are privileged, insensitive, clueless and mean without “r word.”

I cried. That one little tweet rallied a whole community and made a best-selling author reconsider using the R-word in her novel.

This all started with an open letter to Jennifer Weiner. I’d like to amend it to this:

Thank you. Thank you for responding, thank you for listening and thank you for understanding that the words we all choose can make a difference. When people use the R-word, it reinforces the stereotype that kids like mine won’t amount to much. It tells a teacher there’s no point in trying to teach her things — they must be beyond her grasp. And it tells a future potential employer that there’s no way she could do the job. It tells my son his sister isn’t worth much to the world, and it tells her she doesn’t matter.

Thank you for making her, and every individual with an intellectual disability, matter to you and to your readers.

It’s just a couple of words to you, but to me, it’s a brighter future for my kid. It’s everything.

Oh, and now I can’t wait to finish the book. So thanks for that, too.

I’ve always known you can’t change the world by keeping quiet. But I’ve learned you don’t necessarily need a megaphone to do it. Sometimes 140 characters, a little passion and a little help from other people who believe in the same world that you do are enough. 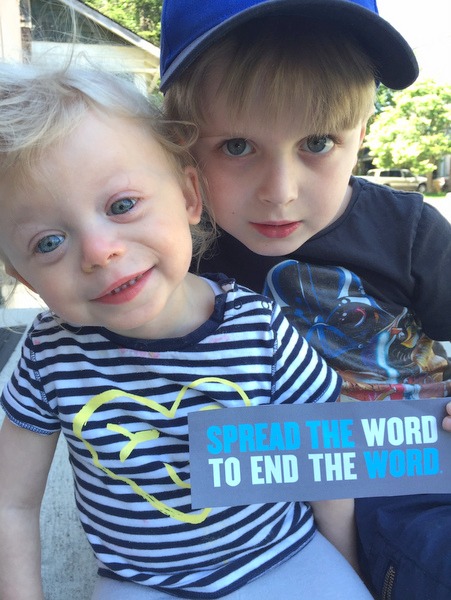