Last Monday, my daughter Esmé, her caregiver Mayah and I went out for ice cream. We sat in a shady spot with our cones. Ez sat in a tired and slightly wilted, but happy, side reclining pose in her wheelchair. We gave her tiny tastes of ice cream off our fingertips, and we gave her a tube-meal while trying to down our ice cream before it melted down our hands. 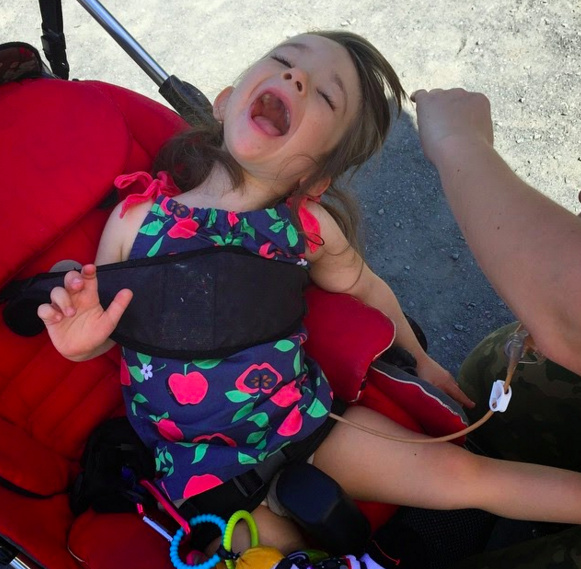 After a while, I noticed a little girl sneaking closer and closer to us in a shy effort at making friends. Eventually she started talking with us. She was sweet, articulate and curious, telling us about her big sister and baby brother between darting back to her grandmother now and then to steal bites of her ice cream.

At one point, I asked her how old she was. Four, she said. I responded with a smile. “Esmé is 4 too. When is your birthday?” Turns out, she was born the day after Esmé.

I found myself troubled by what Esmé must think or feel when she sees another child her age able to do these things so easily — when she sees another child engage her mother in a way she cannot. This worries me more that it has in the past, because in the past she seemed not to notice or care much what others did if it didn’t impact her. But we’re seeing this emerging social awareness — primarily born, I believe, from her time with her wonderful school friends.

For example, this week at school for the first time she recognized that her classmates were transitioning from the reading rug over to the tables for snack. Her classmates all stood up and moved in that direction. She followed them, purposefully army crawling to the table to meet them. And then she sat at the table until all of the children were finished. This is a feat for her.

Later on in the week, she tried to crawl out of her occupational therapy session with her caregiver and her therapist. She then aimed herself toward the door I had disappeared behind, answering their questions as to where she was going with a Maman, Maman, Maman.

All of this is wonderful. It means she’s increasingly attuned to her surroundings and what people are doing around her. It also means she’s going to be increasingly aware of the difference between her and others.

Recently we watched an unfamiliar episode of “Yo Gabba Gabba!” And in it the characters talked about all the things “babies” cannot do — walk and talk and eat on their own. Ez loves “Yo Gabba Gabba!” and had been watching in her intent way — chin up in a way that always makes me think she’s about to take notes. But as soon as this discussion started, she began to whine in protest. She got increasingly anxious until I turned off the show.

I tell her all the time what a good girl she is, what a big girl she is and how proud we are of everything she can do. And I try very hard not to place pressure on her about future successes. I never want her to form her self-worth or identity around what she might do or not do someday. Nor do I want others to perceive her as incomplete because she’s not doing something yet.

You can’t explain to the kid who calls her a baby in passing that she’s older than him. But we have been able to educate her classmates about something I believe is so much more important than anything they might learn in preschool: thoughtfulness and sensitivity to someone who is different from them. I truly believe they will carry this gift with them for life in some way.

And, at the end of the day, I have hope that the little girl we met last week who was one day younger than Ez is learning that, too. There is evidence she is in the way she seemed unfazed that Ez was her age, in the calm model her grandmother presented as she kindly remarked about Esmé’s beautiful name. They weren’t overly curious, or eager to categorize her. They just accepted her as she is: this is Esmé, and she is 4 years old.