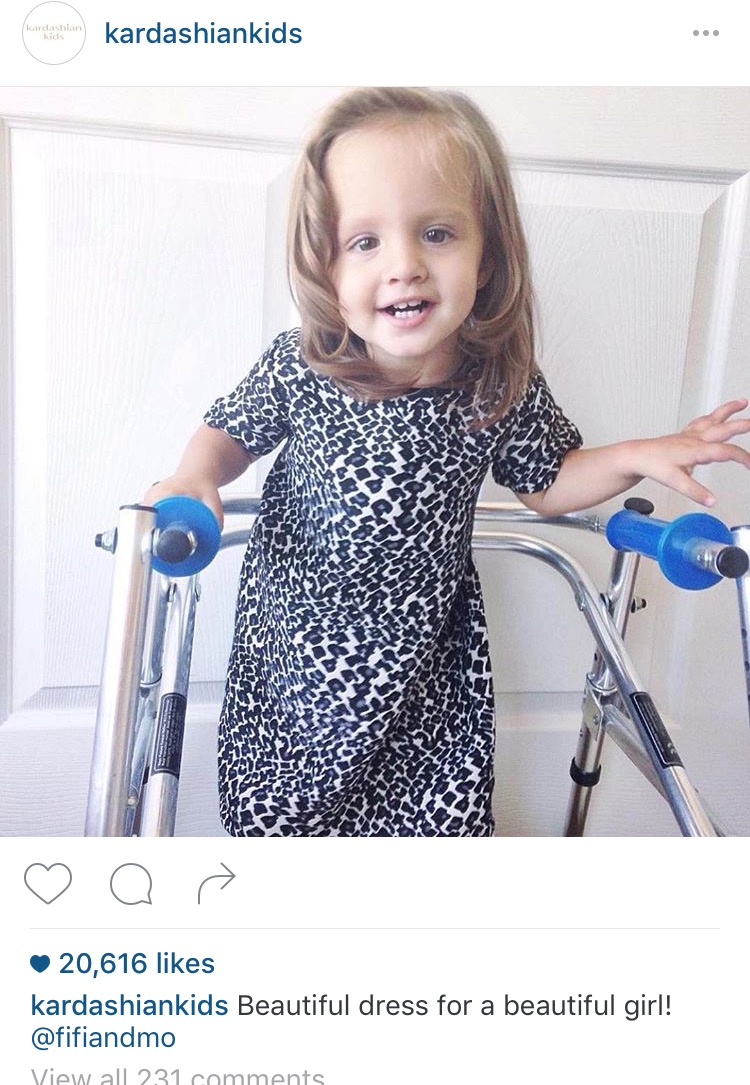 One morning I woke up to the Kardashian Kids (the Kardashian family’s children’s clothing line) tagging us on Instagram and reposting a picture of my daughter in one of their dresses. In the photo, she’s standing in her walker. This account has more than a million followers, so this was a big deal to us. I thought, “Wow! This is possibly bringing cerebral palsy awareness to a million people!” I reposted the image and was proud of the platform we were provided with.

As I went to text my sister and cousin, I began to get bombarded with notifications. Mostly supportive, but the ones that stuck out were angry at the negative comments left on her picture.

Negative comments? I was scared to look. I had never had this emotion as a parent yet — fear of judgment. Of course I’ve felt that for myself, but never for my 2-year-old child. I immediately thought, “Oh my goodness, what did I expose her to?” I debated asking them to take it down.

Then, my direct message box began filling up with notes from other special needs mothers. You see, right after we received Fin’s diagnosis, I felt so alone. I believe all parents do. So you can imagine following all of these popular kids shops on Instagram and then one day seeing a child like yours in the feed.  Many of these precious mamas said they were “in tears” that they found someone like them!

Most moms post pictures of their kiddos in cute outfits, going to dance, soccer, swim, what have you. Yet, when your child requires medical assistance, you may have a different thought process behind posting these simple picture. I’ve always felt the need to address this issue. I’ve heard a few people around me say I’m “exploiting” my daughter. It makes me sad because I’m merely a proud parent just trying to bring more awareness for something so my child may feel more accepted. So far, it’s worked. People immediately comment on her, rather than her medical devices. I feel I’ve been able to use our Instagram account to spread the right kind of awareness. I’m so grateful for each shop that reposts one of our images because it brings more awareness and acceptance to children with special needs. I’m grateful for the Kardashian Kids post because I feel it made a mark for the CP community and was an eye-opener for others.

Back to the negative comments for a second. One commented, “forehead fo daysssss.” Others asked, “Why is her head so big?”

The words were cruel. Along with cerebral palsy, she has “macrocephaly,” a medical term for “large head.”

A lot of people sang the Kardashian Kids praises for posting “diversity,” and a lot of strangers came to our defense. People kept asking me what I was going to do. What could I do? I wasn’t about to start one of those pointless internet debates. This is all part of being public and trying to teach people about something. There’s an ugly side to being an advocate. Bottom line, some people are just rude. This was quite the lesson, and I took the beating.

The next day the Kardashian Kids sent me a message: “Hi Christina! I hope you weren’t upset by the ignorant comments on the post. The ignorance in this world never ceases to amaze me. There was so much love and support for little Fin, I hope you have gained a lot of kind, supportive followers. Xo”  You know what, KK? We did, and thank you.

To the rude Kardashian Kids Instagram fans: Thank you for showing us a glimpse of how rude and ugly the Internet world can be. I hope you feel really proud of all the things you wrote. I somehow know you would never have made these comments in person. Attacking a child’s appearance is never OK, regardless of how “harmless” you feel it is. I hope you try to troll the Internet with positivity because then you will actually help out in making a difference. Everyone can be negative. Just try saying nice things and see how good it makes you feel. I promise it will.

WATCH BELOW: Secrets of Being a Special Needs Parent