Emotional Support Animals: Legitimate or an Excuse to Take Your Dog on a Plane?

I think we are all familiar with the term “emotional support dog,” and like most people who are ignorant to a situation until they find themselves in that same or similar situation, I laughed about it. Even made some crass jokes I am ashamed to admit. It just didn’t make sense to me as how taking your dog to public places could actually be helpful to your emotional well being, especially considering how much effort it takes to actually be able to take your dog anywhere. I’ve seen people taking their large dogs on planes and I seriously had to wonder “Was that even legit or were they just trying to take their dog on a plane for a cheap price?”

Having worked in the recording studio industry for the better part of my life, we always had a pet or two (cat, dog or both) that lived in the studio. This is quite common for most recording studios, but being allergic to most animals larger than a rabbit, I found it most disconcerting that I had to take an allergy pill just to be able to go to work. Over the years I worked in the studio and other more corporate institutions, something else happened beyond my own selfish irritation.

You see, I began to take notice that these amazingly talented artists baring their souls and often horrific details of their own childhoods, sang and performed better when their favorite studio mascot was in the room with them while they played.

Fast forward 10 years later and here I am living like a recluse with my two sons, tucked away in the Redwood mountains. As my disease continued to take a turn for the worse, I found myself pulling away from those friends and acquaintances I felt didn’t understand what I was going through. Now of course I’ve kept the friends who weren’t afraid to say, “I love you and I have no way of knowing what your going through. But I want to learn, and I want to be there for you.” Those are what I call keepers. Those are the friends who not only love you when you’re the life of the party, but love you more when you say you can’t be that person anymore. Three weeks ago my dear friend Rich packed up all of his belongings into his car and moved up here to be my physical strength and support. I was literally blown away that someone cared so much they would put their entire life on hold, just to help a friend.

When Rich got here he came to find a single mother of two teenage boys and no male figure to back her up. There were times after an extremely bad fight, I would go upstairs to cry, and Rich, in his quiet laid back way, would get the boys to understand they needed to be a part of getting Mom better. If the boys needed to go somewhere and I was too sick, he has been right there to help get them to where they needed to be. Throughout all of this, our older dog Yoko was also sick and getting ready to pass on. I feared for my oldest son’s well being, as they were inseparable.

After a particularly rough day, Rich and my older son decided to go for a ride to talk and have “male bonding” time. Two hours later, they showed up with my Maggie Mae. Maggie is hands down the cutest puppy I’ve ever seen, and she truly gives me something to wake up for every day. Sometimes it’s just to ensure she doesn’t tinkle on my bed, but mostly because her energy has renewed mine. I take her for a walk, and even if I myself am not feeling well, it forces me to get out and move around. Once our older dog Yoko had passed away, my attachment to Maggie grew even stronger, but I still wasn’t prepared for what would come next.

Keeping Maggie on a routine began to keep me on a routine. I couldn’t sleep in. I had to feed her and take her out to go potty, but I could go back to bed and snuggle with her. I began to think, “I know she’s a puppy now but later maybe I could train her to actually help me out.” I kept seeing people share their stories of exceptional friendships with these animals, cats, dogs, rabbits, even ferrets.

Then out of the blue, I awoke at 4 a.m. not able to breathe and was admitted to the hospital for chest pain. While I was beyond thankful Rich was there, (please don’t tell my boys I am saying this), I missed my Maggie. Actually, I didn’t just miss Maggie, I was having anxiety at the hospital and all I wanted was to cuddle with my puppy and relax, but I just couldn’t. There was too much going on, a person in the room next to me screaming, and I began to just want to go home more than I wanted to find out what was wrong with me. When she’s around, I am just a normal dog mommy. I am not the lupus girl in room 8. I am not the friend who missed the baby shower because I couldn’t stop throwing up. I am not the mommy who fell asleep at 2 and was an hour late picking up her son. I am not even a lupus warrior. Her love for me is truly unconditional, as is mine for her. The comfort she gives me is incomparable. 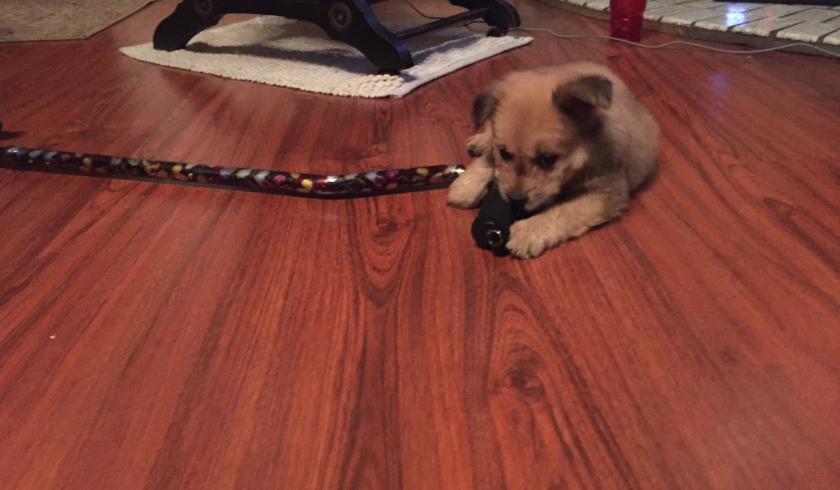 It finally hit me while laying in that hospital bed that everyone needs emotional support. Who the hell was I to judge anyone for how they chose to get that support? The reality is support can come from a variety of resources such as people, places, animals and things. It isn’t about what or who it is, it’s about the fact that we need it, and if we are lucky, we can find it.

While I will always be ashamed of how ignorant and judgmental I had been, I am not ashamed to say that this little pup has helped me to grow as a person and accept the fact that I do need support in multiple areas of my life. I know I will always need help and support if I am to get through this, but don’t worry, I’ve got my emotional support covered. I can’t wait to take Maggie on a plane.

The Mighty is asking the following: What’s one thing you thought on the day of your or a loved one’s diagnosis that you later completely changed your mind about? Check out our Submit a Story page for more about our submission guidelines.