The R-Word Is Offensive, Even When There Is No Ill Intent

We were connected through a mutual friend. Our conversation via Facebook messenger started off friendly enough. He shared a blog post he had written. I shared one about my son, Augie. “Augie has Down syndrome,” I explained. I wrote more, but that statement must have stood out. He responded with a short note that included an invite to read another one of his blog posts.

“This one is about my retarded brother,” he wrote.

Bam. That word. It struck me in my gut. Hard. Tears formed in my eyes. I opened the blog post and tried to read it. But the whole time, those words replayed in my head. “My retarded brother,” he had said… in response to me sharing I had a child with Down syndrome.

He didn’t use the word “retarded” in a vulgar, mean way. He wasn’t making fun of his brother. He was describing his brother using the textbook definition of retarded – “slow or limited in intellectual or emotional development or academic progress.” I assumed this is normal for him to talk about his brother in this way. But, this was not normal for me. I have never and will never think of my son in this way. It hurt me to read those words.

Yes, Augie has Down syndrome. But he is so much more than a diagnosis. He is a happy 4-month-old little boy with the best gummy smiles. He loves to stare at me with his expressive eyes. I sing to him. I talk to him. He listens intently. He loves to snuggle. He reaches for his toys and loves playing on his play mat. He can bring a smile to anyone’s face.

The R-word is offensive to him, even when there is no ill intent behind it.

Yet, there it was, this word that made me cringe, cry, and snarl all at once. Augie is only 4 months old, and already this word was indirectly thrown in his direction. I now had a choice for how to respond. I could ignore it. I didn’t know this person. We had only exchanged a couple of messages back and forth. I could just choose not to respond and go on with my life. But that word. The kick in the gut I felt when I read it. I couldn’t just ignore it.

I could be passive aggressive and just blog about it. Not actually say anything back to him but get out my feelings through writing. Avoid conflict. But, again, that word. The tears that dropped from my eyes when I read it. I couldn’t be passive about the use of that word.

So I went with option 3. I chose to respond and address it. I carefully considered the words I would use in my response. Because words matter. Words can lift a person up or tear them down. They are powerful. This was not about being aggressive or rude, stepping up on a pedestal and looking down on this stranger, or shaming him. This was about sharing a different perspective with him, and ensuring he understood how that word made me feel. I let my emotions simmer down, and then I wrote.

Here was my response:

Thank you again for sharing. Your faith is strong and your writing compelling. […] To be honest though, I was thrown off before I even opened your blog post by how you described your brother as your “retarded brother”. I know that you were not using the r-word as an offensive term, and in it’s truest form, it is simply a description of someone less mentally, physically or socially developed for their age. And it is probably very normal for you how talk about your brother. But let me offer a different perspective.

You never know how a word like ‘retarded’ is going to hit somebody. Or, who may have a child or sibling that has had that word thrown at them in a hurtful, disrespectful, ugly way. Even in the medical world, mental retardation is no longer used. In the same way that mental retardation replaced words like idiocy several decades ago, now intellectual disability is a more appropriate description.

I also think that people-first language is important no matter who we talk about. Down syndrome does not define my son… Augie is not a Down’s baby, he is not Down Syndrome. Augie has Down Syndrome. I always put him first when I talk about him. […]”

He never responded, so I don’t know that I made a difference. Maybe I did, and maybe the next time this individual describes his brother, he’ll choose different words that highlight the unique and wonderful person his brother most definitely is. But, maybe he won’t.

And that is OK. Because I went with option 3. I spoke up. I was respectful but honest. I didn’t allow an offensive word to slide by without explaining my point of view. 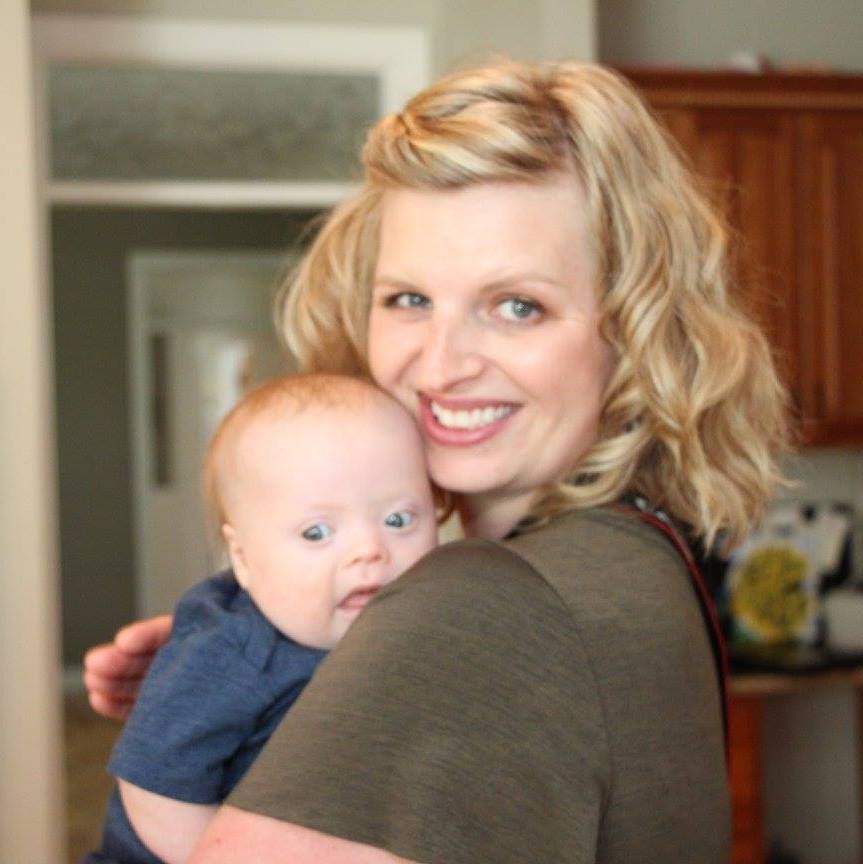 I stood up for the stranger’s brother.

I stood up for Augie.

And I will continue to do so. Always. Because that’s what mommas do.