When My Students With Special Needs Comforted Me Through My Illness

Throughout the three short years I’ve had of working with elementary special needs children, there have been several encounters that brought me to tears of joy. I feel like sharing three of these precious moments with you to let you know just how comforting a child that’s “different” really can be, even when they don’t know what you’re going through.

When Jesse hugged me after I was diagnosed with a chronic illness called systemic lupus in April of 2014.

Jesse had a traumatic brain injury. He also had a speech impairment and needed help in many different ways. I loved helping him. The day after I was officially diagnosed, I was sitting at the lunch table with Jesse in the cafeteria and he was playing with orange slices in his mouth. He put one in his mouth, like we all did when we were little to show the other person that our smile was in fact not teeth, but an orange’s skin. I giggled, but the smile didn’t reach my eyes. He looked at me for more than three seconds and said, “Nee hug.” He reached out his arms gesturing me to come to him, but it sounded more like, “Come he, come he.” I scooted towards him and hugged him, feeling like he became the adult and I was all of a sudden a child in desperate need of a hug. I instantly felt like everything was going to be OK. A child’s hug is everything.

When my hands were too sensitive to pain, and Aveah told me to sit on the swing, so she could push me instead.

Aveah has Down syndrome (DS) and she was probably the giggliest little girl I ever worked with. One day, I was barely able to push her on the swing due to the disease affecting my hands and wrists. She wanted me to stop; I thought maybe she was annoyed at how soft I was pushing. As I was expecting her to walk away, she told me to sit in her place and then started to push me. She didn’t speak, but she had a grin on her face the whole time. My joy couldn’t be self-contained and I started to laugh with joy. She inwardly let me know that even when you can’t do something well, there will always be someone there to help you.

When Colten touched my cheek and said, “You’re important,” while I was going through my first heartbreak.

Colten is an autistic child I work with currently. He’s fun, caring and sweet as pie. In December of 2015, I felt my first heartbreak from a man I loved who broke me in every way, and it’s something I’ve had to heal from throughout this hectic year. One day was particularly hard for me while we were outside playing tag and monsters with the kids. I was running and laughing, catching kids in my arms, grateful for the slight wind that would dry the tears springing in my eyes. I slid down the slide and Colten was waiting for me at the bottom. I saw him and immediately reached out to tag him and said, “Got ya, Colten!”

Instead of running away from me, he looked down at me, touched my cheek and said, “You’re important.”

Stunned, I replied, “So are you, Colten.”

I sat there for a second trying to recall a movie where a woman went down a slide and if he was playing a character, but I couldn’t think of anything. Either way, it couldn’t have been more perfect. I’ll never forget those words.

This is what makes them special — not because they have any kind of disability or special need, but because they are beautiful human beings who can feel the heart of another person in silent ways. That, my friends, is pretty special.

Follow this journey on One Mountain at a Time 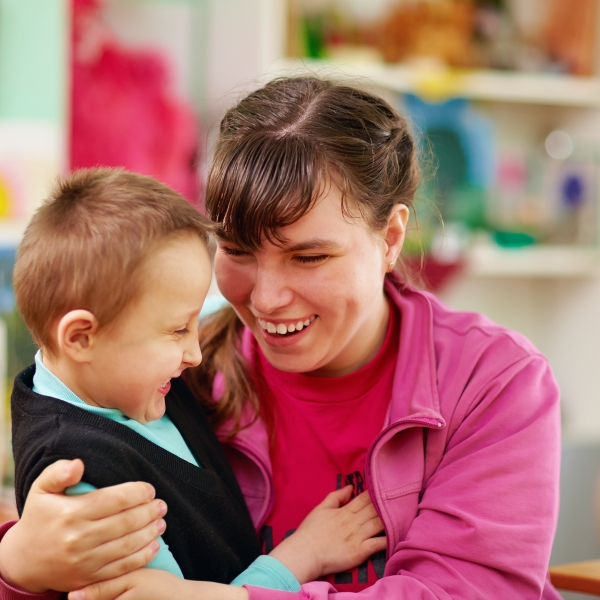