Dealing With Isolation When You Live With a Mental Illness

In the last 20 plus years of struggling with depression and in the last 10 years with anxiety, I have come to learn a lot about both illnesses. When I was diagnosed, I delved into researching these two illnesses, learning causes, symptoms and treatments. I went through many medications and therapies.

I have become a huge mental health advocate and a big help to others. I like to consider myself an expert, just not a medically trained one. Yet, now I have been blindsided by a trait of these illnesses I never thought possible — isolation.

I’ve always considered myself lucky. From my first diagnosis decades ago, I have had a strong support system. Although I was told never to talk about it in the beginning, my parents always stood by me and got me the help I needed. My husband, having dated me for eight years before marrying me, knew from the beginning that his wife was a bit “atypical.”

He has never left my side even though I have told him numerous times to leave. My oldest and dearest friends, ranging from childhood through college to now, support and love me. I have never felt lonesome.

Then, why do I feel so alone, ignored and at times disliked? Being a part of a small but close group of friends has in ways saved me. There have been times where we have gone out, and I did not want to go because depression was rearing its ugly, lying head at me. From my years in therapy, I knew socialization is a must and I always forced myself to go.

Most of the time, once there, I had an great time. They accepted me and my “flaws.” Lately, something has seemed to change. Of course, being a person with anxiety, I am worried it was me.

What did I do? Did I say something wrong? Am I discussing my illnesses too much? Did I offend someone? This change started toward the beginning of summer. Text messages became less. Social media “likes” dissipated. Summer gatherings were few. And then, then, it culminated with one recent event and no invite extended to only myself.

The isolation I was feeling already, grew. Like a building in an earthquake, I crumbled. Tears streaming down my face, I felt so alone. I worried I would succumb to depression again because this branch of my support system was breaking. I worried they had “disowned” me. Most of all, I worried this isolation was caused because I had a mental illness, something that was never an issue before.

I tried to create answers for myself:

They’re busy. We all are. I only discuss my illnesses on my blog and other websites so that can’t be it. I haven’t been great at inviting people over to my house (because, honestly, I am embarrassed by it.) Maybe my daughter said or did something to one of theirs. No, stop, do not even go there.

I must have done something to lower myself down a few rungs on the friendship ladder. Now, I am alone, abandoned to my worrisome thoughts, questioning over and over what I could have said or done and always fearing the worst. I have now isolated myself, letting these negative thoughts control me, too shy to outright just ask or nonchalantly bring it up.

The days that have since followed have been days in thought, deep thought. Taking what I’ve learned in both cognitive behavioral therapy (CBT) and eye movement desensitization and reprocessing therapy (EMDR). I have sat with these thoughts more logically.

Did I say or do something? It’s possible, but I don’t think so. I am an excessively loyal and kind person, always there to listen and help. Do I discuss my depression and anxiety too much? Most of the time when with my friends, I don’t say anything. I am the listener. So, probably not.

In the end, we are all busy. For now, I am trying really hard to not be hard on myself while I wonder what happened with my local social group. It’s still a bit of a struggle, and I still feel isolation. 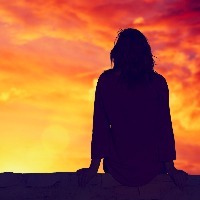