How We Helped Save Our Son From the OCD Monster

Although I used to be a travel writer, I took my most frightening journey only recently, with my family, without ever leaving our small Quebec village.

After my father died in 2012, my son was so shattered that he transformed from a happy-go-lucky 10-year-old into a near-stranger dominated by bizarre rules of magical thinking all designed to bring his grandpa back to life.

For such an even-keeled kid, my husband and I were alarmed that losing his grandpa would plunge our son into an existential crisis. A tidal wave of grief was forever smashing him down and he couldn’t find his way to the surface. But as winter turned to spring, I started noticing his grief easing up a little. He was no longer crying into his pillow at night and had started laughing again. Except, now he was doing something else I found peculiar.

One evening I was sitting beside him while he seemed to be unconsciously tapping each elbow onto the back of the couch. Four taps of the left elbow, four taps of the right. A few tapless minutes would pass and then he’d start the routine again. Over the coming weeks, what we called “making things even” became more complex, seemingly full of complicated rules. One day he started turning his head as far as it would go over his shoulder, then he’d turn his head to the other side over the other shoulder. But it didn’t stop there. He’d go back and twist his head twice on the first side, then twice again on the other side. It looked like an exercise for old people. “Do the kids in school notice you doing that?” I asked him one day while he was building a Downton Abbey-esque estate on Minecraft.

“Yeah, sometimes,” he said, not looking up from my iPad.

“What do they think about it?”

He shrugged. “They just think I’m stretching my neck.”

One evening I decided to Google, “kids making things even.” I doubted my search would lead anywhere since those words together seemed so arbitrary. But I was shocked to find link after link with that very phrase, including one that led to something called “symmetry rituals.” My ribcage tightened. That’s exactly what Quinn was always doing, performing rituals to make everything symmetrical on both sides of his body. I found a forum where a teenage girl was describing how if she tapped her left forearm, she’d have to tap her right forearm. How could something seemingly so random be so ubiquitous? I looked up at the url and inhaled a deep startled breath. It was a website for obsessive compulsive disorder (OCD).

I spent hours researching OCD and was relieved to discover that cognitive behavior therapy actually causes chemical changes in the brain and by changing your behavior, you change your brain wiring, finally getting relief from OCD. By performing “exposure” exercises, the brain re-circuits itself until the obsessions and compulsions lose their appeal. It’s hard work but it’s pretty much the only option. We started Quinn on the exercises (called ERP — exposure and response prevention) immediately.

Although we saw gradual improvements with ERP, sometimes Quinn didn’t respond to it at all. I wondered if the giggly little boy who Quinn had been would ever come back. As the weeks passed, my husband and I became so hollowed out we were like ghosts you could see through. One morning, after seeing the “OCD Monster” enslave Quinn with yet another ritual — one that immobilized him — all I could do was run out to our parked car, roll up the windows and start sobbing, howling over and over for the sad lost echo of my son. That night, Rob and I realized we needed to tell all our friends, everyone we knew.

I sent an email to all our friends and neighbours explaining why they hadn’t seen Quinn around on his bike lately, or us out on our street. “…We know the Quinn is still in there somewhere. If people could visit once in a while that would go a long way in lifting our spirits. We need our friends and we need Quinn back. There’s nothing more important to us than getting our son back to the happy kid we used to know…”

After writing that letter, the phone began ringing almost immediately. Emails flooded my inbox. People started knocking on our door and as it turns out, the OCD Monster hates visitors. Our story had been released, had wings, which meant love and support were coming back to us.

One day, I couldn’t find Quinn in the house. I went outside and thought I heard singing. The singing got louder as I walked down our laneway. When I got to the end of our laneway, I looked up. Quinn was at the very top of our pine tree. When he saw me he stopped singing and called out, “Hi, Mummy!” and started climbing down. He jumped off a lower branch and landed in front of me. His face was flushed pink. I asked what he’d been doing. In a steady strong voice, looking me in the eyes, he said, “I sang ‘Somewhere Over the Rainbow’ to Grandpa and I let him go.”

I stared at him. A blue jay squawked nearby. “You what?”

“I sang the whole song. Then I let him go.” He said this matter-of-factly. He was smiling. There was a calm in his face I hadn’t seen in weeks. He began walking up the lane, saying he wanted to go to soccer practice. I stood there watching him as he made his way up the lane kicking a stone like a soccer ball. Could it be true?

I’d realize later that letting his grandpa go up in the tree healed something that was broken in his heart. The OCD Monster was still quietly slithering in the pathways of his brain, but the fight was now on.

It has been three years, and thanks to ERP and community healing power, the OCD Monster has never made a comeback. 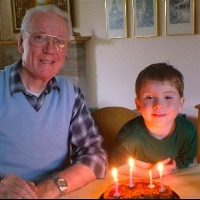