Since I was very young, I’ve struggled with controlling my anger.

As a little girl, I’d succumb to temper tantrums often. Throughout adolescence, I’d quarrel with my parents, having meltdowns in rapid succession. When I was married, I’d fly off the handle at the smallest of infractions, becoming even more incensed when my former husband refused to engage in an argument. He’d always manage to remain reasonable and level-headed; to stay exasperatingly calm regardless of how irrational or emotional I became.

Instead of this calming me too, however, his detachment and formality only angered me further, making me feel trivialized, childish and impotent. I doubt his fighting back would have done us any favors, though. The problem, of course, wasn’t him. And it wasn’t my parents, my siblings, friends, or peers, either. It was (and is) me. Me and My Rage.

As a bipolar adult, I still struggle with rage issues. Often. Big-time. I’m impatient, impulsive and irritable. Plainly stated, I have a short fuse. Excess anxiety makes me hyper-vigilant – that is, I become startled easily. When that happens, it triggers instantaneous anger.

Of course, anger’s actually a secondary emotion to fear. I know this, as I sit here, rationally typing away. But in the moment, I don’t take a beat to carefully consider my reaction and arrive at a more appropriate, healthy response. In my estimation, there isn’t time to employ some anger management coping strategy such as counting to 10, deep breathing or using “I” statements before I totally lose it.

The medication I’m on does take a significant edge off my predominant negative emotion – anxiety – and in doing so it reduces overall incidences. Running also helps a lot because it’s so aggressive, so physical. But anxiety still happens and I struggle. The white hot anger takes control and before I realize what I’m doing or saying, I’ve lashed out, been disruptive or awful to somebody — and that’s never good.

One anxiety reduction method that’s been suggested to me time and time again is that I begin practicing yoga. Honestly, I really would like the physical and athletic benefits of a dedicated yoga practice. I know that yoga would help me with things like flexibility, core strength and correcting muscle imbalances — all of which contribute to what I’m ultimately seeking: injury prevention so I can keep running. Theoretically, it sounds great!

But as far as the spirituality part goes? The meditative piece? Bringing the hands to the heart’s center, and all that jazz? You can keep it. To me, that seems very annoying, very aggravating; all that slowing down, holding still, breathing deeply and keeping quiet. Even as I think about a hypothetical practice, I’m growing itchy and annoyed.

Yes, chaturanga dandasanas would do wonders for my delts, but how to proceed with making a yoga practice more appealing to a ferociously angry, rapid mood cycling person, such as myself? And would a traditional yoga practice even work towards eventually reducing my anxiety, that is, if I practiced regularly? Would it actually help even out my moods, grant me more patience, or make me less likely to go ballistic at the slightest affront?

Probably not, actually. Come to think of it, I know several yogis with a dedicated practice who are angry and impatient as all get out. But I’ve been hearing about all these alternative forms of yoga popping up and one particular mutation, er, interpretation caught my interest: “Rage Yoga, a brand-new, unconventional type of yoga practice developed by Lindsay Istace of Calgary, Canada who uses screaming, swearing and heavy metal music during workouts.”

You don’t say. Tell me more…

The official website defines Rage Yoga as “a practice involving stretching, positional exercises and bad humor, with the goal of attaining good health and to become zen as f*ck.” The classes are based on the Vinyasa flow, which I don’t really know much about other than it’s continual movement from one pose or “asana” to another, rather than holding the poses for a period of time. So it’s faster-paced and “fitness-y.” And there’s screaming. And swearing. And loud music. It’s, essentially, venting.

Rage Yoga is the only yoga I could deal with at this point in my life. That said, “at this point in my life” is I’m a single gal with zero dependents. I have the theoretical luxury of visiting with my nieces and nephews, patting them on their cute behinds and then high-tailing it outta there as soon as pre-naptime fussiness begins, or worse, the full-blown meltdown.

But we’re all human, and as such we can relate to occasional feelings of edginess and hyper-vigilance, right? Ultimately, this type of yoga class sounds really cathartic and definitely worth trying. Since these classes are only offered in one Canadian city, those of us elsewhere will have to settle for the six-week online courses slated for this summer, but I’m sure copycats are close behind.

Better yet, you could start a Rage Yoga studio yourself! If you do, let me know. I’m game for some screaming, swearing downward dog.

Follow this journey on Salt and Pepper the Earth. 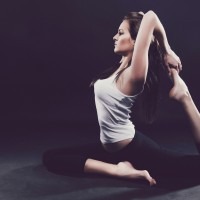