What I Realized When Anxiety Changed Our Trip Plans

I had done all the research. I had planned and picked out the agenda. Found the perfect hotel. I had even made an awesome Social Story with the cool app I have. I used actual pictures of the inside of the hotel because I knew he would ask. He would need to know every last detail. I had pictures of the pool, the outside of the hotel and the lobby. Yes, I had lists of all the stores and restaurants. I had pictures and maps to show the geographical location of everything we planned to do.

Yet after all the work and planning, I couldn’t get Jack to leave his yellow house.

I had thought it a brilliant plan. I was going to take my daughter and son to Boston overnight last year and then a quick drive up to New Hampshire for my daughter to look at a college and then drive home.

The thing is Jack is on the autism spectrum and has an anxiety disorder. Life is not always easy for Jack. Going new places can cause anxiety.

He has many anxiety triggers. Certain foods, stores (especially if they are crowded) and if there is a stranger in the same aisle as us, going anywhere new, going places we know, certain coats, not being able to sleep, going to the movies, making decisions, leaving the house, and going to school.

In my day dream the three of us would wake up Thursday morning and pack our bags. The beauty of driving is we could bring a lot. If Jack wanted to bring his weighted blanket, stuff animals, pillow, iPad, iPhone, headphones, books, Legos, thinking putty, fidget toys, we could bring it all. We would load up the car. Jack in the backseat with his headphones on, my daughter sitting shotgun helping with navigation. The rest of the family at work and we would be off on an adventure!

I imagined a sunny day and us walking from the hotel to the aquarium. We would be looking at the fish, seals and turtles. We’d be smiling, holding hands and laughing down the street as we went to Quincy Market. We would enjoy a nice dinner and shopping and go back to the hotel and take a swim in the hotel pool.

On Wednesday, the “I’m not sure if I want to go to Boston” statements started. He worried about what to bring and what he couldn’t (the PC and the toaster). He didn’t want to leave his yellow house. Out came the Social Story again, the websites, the lists, the pictures. The reassuring that it would be fun! Nonetheless we still had the refusing to go. The other members of my family telling me it was probably best to just not go. In the end, I knew they were right, and I cancelled the trip.

That is when I started to feel sorry for myself. I had just wanted for a day and a night, to have fun, to have smiles, to hear laughter surrounded by hugs.

When I woke up the next morning and Boston wasn’t happening, I had a pity party for myself. I had done all the right things. Damn it I wanted rainbows and unicorns! No, I just wanted to spend a day and a night away with two of my children.

After a few hours of acting immature and feeling like a crappy mom, I got what I really wanted. Not the trip to Boston, but I had smiles on two of my children’s faces. The smiles came from making sugar cookies together. The cookies took little planning (preheat oven), no packing, just unpacking the bag of cookie cutters, no Social Story on my cool app. No looking at a map, just following a recipe. No getting in the car, just walking to the kitchen.

So maybe Jack had it right the entire time. We didn’t need Boston and the hotel to have smiles… they were here in the yellow house all along. 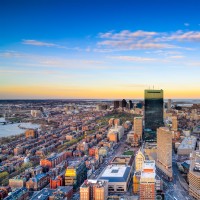