Instead of Fighting My Bullies, I'm Fighting Stigma

This article was originally published by Active Minds and was written by Stacy Pershall, a member of the Active Minds Speakers Bureau who speaks to schools and groups nationwide about mental health and eating disorders.

The place: Prairie Grove, Arkansas. The year: 1985. The setting: a bedroom closet with burnt-orange carpet and a brown slatted door. The protagonist, who’s also the antagonist: me, age 14.

The supporting (or not-so-supporting) characters: the boy who used to call me a dog, but now just stands in front of my locker every morning and barks at me while his friends laugh. The boyfriend who just broke up with me because, despite the fact that I don’t feel worthy of eating, I’m still not skinny enough. The cheerleaders in my all-white school, who think it’s an insult to say, “Gosh, Stacy, if your nose and lips were any bigger, you’d be black.”

By the time I was in high school, I’d let them fill my brain. I no longer had any idea who I really was; they told me now. And so, in deference to them, I hid in my closet and sat on my shoes and wrote their insults on my skin with a Sharpie. DOG, I’d write across my face – I’d done it so many times I didn’t need a mirror anymore. Sometimes, when I was so hungry nausea took over, I’d allow myself to get down on my hands and knees and eat food out of a bowl on the floor. Then I’d pray for forgiveness for thinking my stomach deserved to be filled like other people’s.

The setting today: an EMDR therapist’s office in New York, where I’ve lived for 18 years. I tell her, “I’m mostly recovered since I did DBT a decade ago, but I have these things from childhood that won’t let go of me.” She places small, alternately vibrating buttons in my hands and says, “So, let’s make your brain reprocess them. Let’s make them let go.”

The acronyms: EMDR is eye movement desensitization and reprocessing, but you don’t have to use your eyes; other kinds of bilateral stimulation will do. I like the buttons because they give me something to clench my fists around while I talk about the people I still want to punch.

DBT is dialectical behavior therapy, a treatment for borderline personality disorder, which – surprise! – can be based in trauma. One of the diagnostic criteria is out-of-control rage, which makes sense; when you live in a brain filled with long-gone people who are still making fun of you, you often lash out at right-there people who aren’t.

So I close my eyes and clench the buzzers and my therapist asks me what I’d like to believe about myself. “That I’m competent,” I say. “That I’m strong. That I don’t belong to those people anymore.” And then I cry, for the millionth time, because I’m still not sure I deserve to be free.

And I remind myself of what I’ve reminded myself so many times: dogs are good. Dogs are faithful. Dogs don’t deserve to be hurt.

And after the presentation, I text my therapist. “I did it again,” I say. “I kept a few more alive.”

“That’s what guide dogs do,” she says. “Look at their beautiful, shiny fur.” 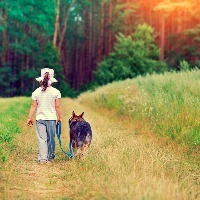