Recently much needed attention has been given to the plight of being black or brown and depressed through media formats. During the recent presidential debates however, I kept waiting to hear mental health care as a platform. I have to say I was quite disappointed in the talking points and the lack of emphasis given to the integral issues such as mental health reform and strategic responses to appropriate care economically, demographically and as it relates to class, race and sex.

In tangent with the lack of fanfare brought to this issue during an election season, I found myself suffering with the effects of this issue. Being no stranger to depression and anxiety, I knew when I began to feel “not myself” I needed to communicate this with my therapist. I have been debating quite strongly against getting more intense treatment as far as it related to medication for depression and anxiety because of shame and guilt. There were some unfortunate societal beliefs that immobilized me from seeking help further.

As a good Baptist Christian girl: “I could just pray this away.”

My African American heritage: “Black people don’t get depressed — you are a strong Black woman.”

My position in the workplace: “How is this going to affect my ability to do the job — they are going to think I’m ‘crazy?’”

Having my best friend at 14 die by suicide after being prescribed medication for depression: “Just silently suffer until you can’t take it anymore.”

Self-care: “I eat healthy, walk, and have lost some weight — so I should be fine, right?”

All of these are unacceptable stigmas that need to be ridded from the vocabulary of those who have or know anyone who has depression or any type of mental illness. I am a proponent of seeking medical treatment, and the sooner the better. I noticed with the added pressure of starting a business, work demands and turning 40, I was depleted. I am grateful I at least had a therapist and some type of insurance, though my network was limited to the proper professionals I was seeking; which lead me to think about the countless people in our city who don’t have this same access of care.

I still found myself in the middle-class shuffle of getting proper care. In my own personal throes of an episode I knew required some immediate assistance, I heeded the advice of my therapist. After five hours in a cold emergency room on a not so crowded Friday night on the west side of town close to where I live, I had an EKG test, a urine analysis and blood work that took two painstaking tries. After speaking with the intake person, a physician’s assistant, an EKG nurse and finally a doctor, relaying my symptoms to over six persons; I was finally told we can’t do anything for mild depression. If it’s not hospitalization, we can’t help you here.

I even had to take my own EKG ports off as the nurse and doctor hurriedly scurried out of my room before I could even speak. His parting word as he gave me a few referrals: “Now promise me you’ll call them on Monday.”

I called over 25 people; psychologists, psychiatrists, medical doctors all in network on Monday. No one could see me until two to three months and no one had any referrals or options except to say, “If you’re really depressed, you don’t need to wait. You need to see someone quickly”.

The America people who live with mental illness are not the ones who are broken — it is the system that is broken. The cost to be depressed and “other” in Birmingham, Alabama is costly beyond the financial ramifications; it is costing the lives of those who are in need of short-term and long-term assistance.

Just because I was seen as having a mild form of depression, I still deserved more answers. Would you let someone who sprang their arm rather than broke it leave without care or with a mere referral? Everyone deserves quality care; all people, all sides of town, all demographics every day of the week. I am quite capable of advocating for my health and well-being, however coping with depression or mental illness may temporarily reduce your ability to do so, especially in an emergency room moment.

I wish I would hear more from the candidates in the upcoming election on how the stigma of mental illness in minority communities still exist; how people in certain areas of cities across America including Birmingham may not receive adequate levels of care or how there is a divide between classes, races and the sexes.

So, how do we solve this problem? Dr. Tony Evans a biblical teacher and pastor suggests, “When a nation faced a problem, God searched for a servant to fix it, not a system. He looked for a person, not a program.”  As taboo as it is to admit and tell my experiences, I don’t won’t other women or black and brown citizens to suffer or be judged either; the power of story resides in each one of our voices, and as we share, we release reservoirs of truth. I am still awaiting some upcoming appointments and fight to overcome the stigma and the sting of depression daily, but through writing, poetry and telling my story; I believe I am finding a pathway towards the light. I choose to serve others who may be suffering as I am, and did that night in a lonely ER with the hope and dignity in which we are all so worthy. 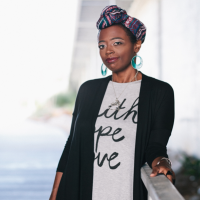