Living with a rare disease can be lonely. My daughter is only one of three people (that we know of) in our entire province who has cystinosis. And with only an estimated 2,000 worldwide living with cystinosis, I often worry about her feeling isolated and misunderstood as she grows up.

It can’t be easy being the only one of your peers who needs more than 10 doses of medication throughout the day. My heart breaks to know that not even her own family, me included, will truly know what it’s like for her.
I’m constantly trying to figure out how I can support her, normalize her everyday life and show her there are children out there just like her. Recently the Cystinosis Research Network (CRN) did something incredible. They published and distributed one of the coolest forms of patient education ever: a comic book.

I first saw some pages as part of the CRN’s “Dream, Achieve, Inspire” art exhibit by artist Kevin McCalla. McCalla, who also lives with cystinosis, created a sub cellular universe where the battle for a young boy’s health is fought between good and evil.
Portraying the amino acid cystine, which cannot be properly transported out of my daughter’s cells, as diabolical villains wreaking havoc on Kidney Cell City’s lysosome recycling plant is genius! And with their minions, the Fanconi criminal organization (for her kidney disease, Fanconi’s syndrome), it looks like Kidney Cell City is lost. That is, until the boy wakes up and takes his dose of Cysteamine. Hidden in each pill is the Super Cysteamine Team, crime fighting, cystine butt-kicking superheroes there to make sure the evil cystine will never have control of the young boy’s body.
It’s an amazing and imaginative way to explain what cystinosis does to the cells in my daughter’s body and also enforces the importance of taking her medication. Her main life-sustaining medication, Cysteamine, often leaves her feeling sick and nauseous, and as she gets older it will be harder to convince her that despite its awful side effects it is actually keeping her healthy. 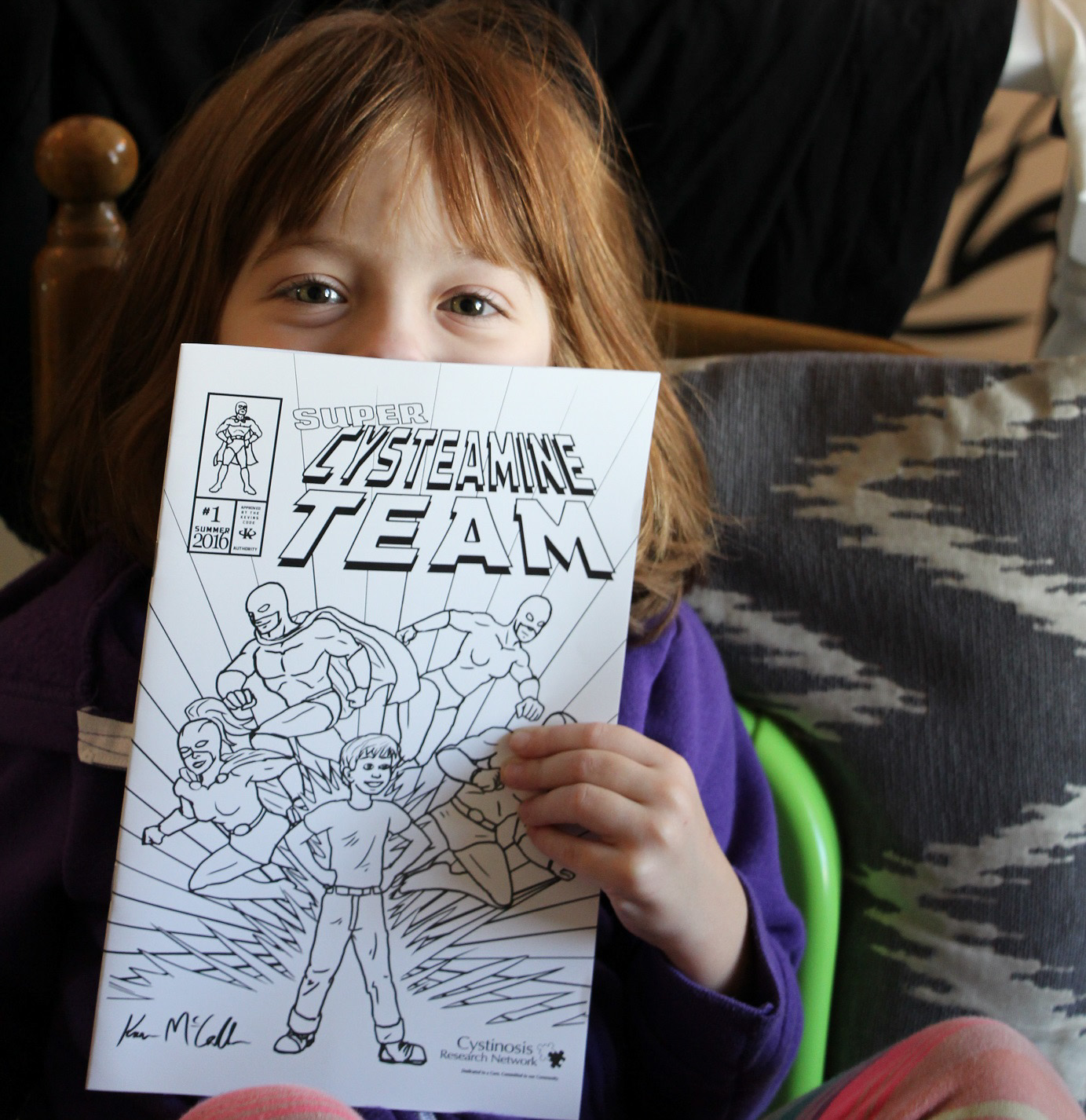 “The Super Cysteamine Team” comic book series puts a cool spin on having to take these medications. Non-compliance is a big issue for many adolescents and young adults and my hope is that this comic book will make a lasting impression on her.

When the only funding for cystinosis research comes from family and friends’ fundraising efforts, we’re always thinking about better treatments and defeating new issues. But things like raising awareness and patient support are also integral to making a difference in the lives of those affected by the disease. I am so, so grateful for initiatives like the CRN and artists like Kevin McCalla who have seen the need for these innovative support systems and work tirelessly to see this need is met. 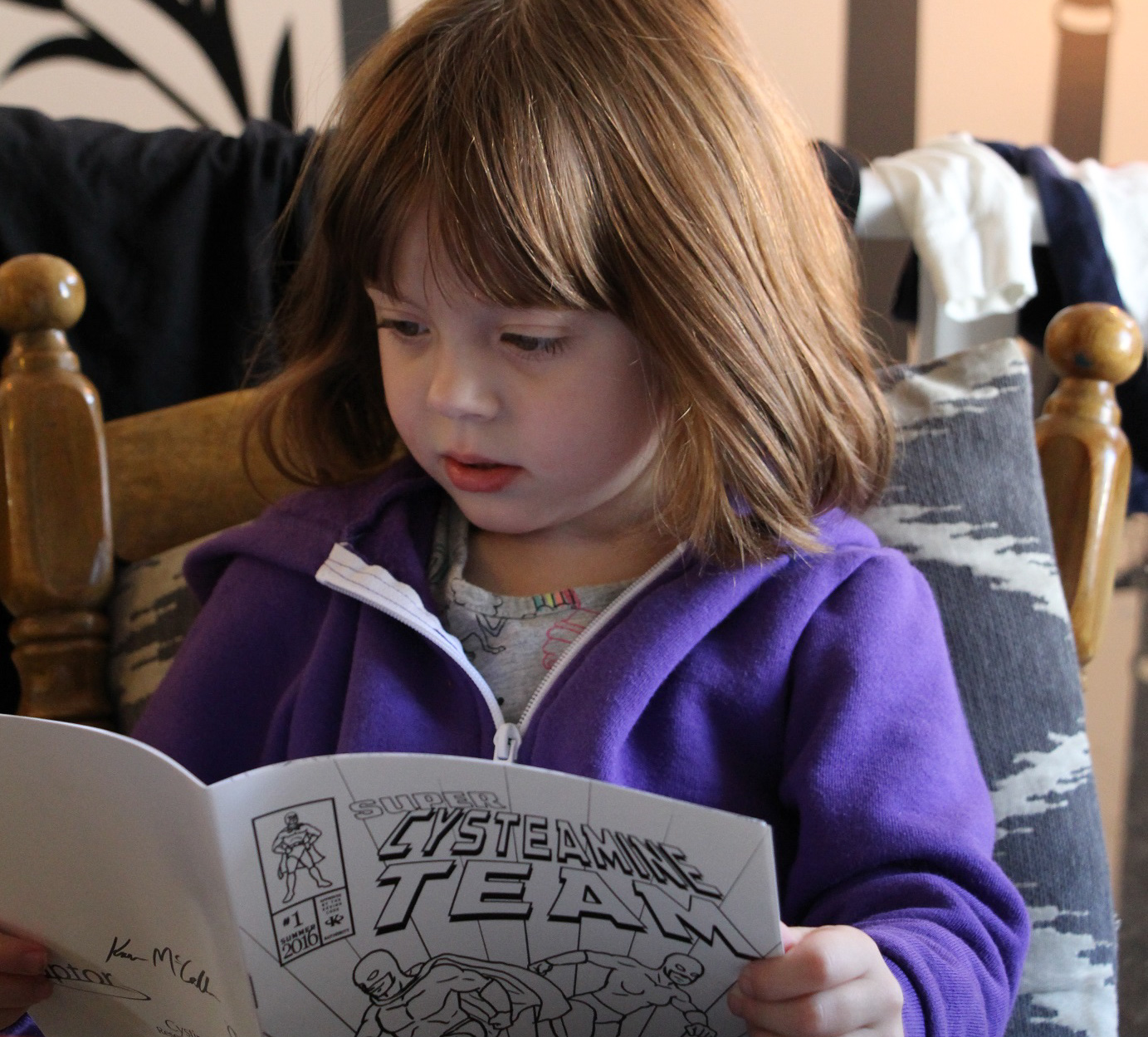 My Facebook feed has recently been filled with photos of children and teens excitedly clutching their copy of “The Super Cysteamine Team” comic book, and the smiles on their faces are truly priceless. While my daughter may be only one of three people in British Columbia living with cystinosis I know with certainty we will not be the only ones anxiously awaiting the arrival of issue number 2.
If you’d like a copy of “The Super Cysteamine Team” head here.