'Off the Rails' Documentary Tells the Story of Darius McCollum, an Autistic Man Who's Been Arrested 32 Times

Darius McCollum loves trains and busses. But McCollum’s love for all things locomotive extends beyond his encyclopedic knowledge of the New York City transportation system. It has inspired him to illegally operate hundreds of busses and trains — crimes that have landed him in jail 32 times.

McCollum, a 51-year-old on the autism spectrum, who is currently incarcerated, is the subject of “Off the Rails,” a new documentary about his life. Over the past 30 years, McCollum has commandeered hundreds of trains in the New York City subway system, MetroNorth and New Jersey Transit. Each of McCollum’s 32 convictions are for victimless crimes. And while McCollum is not a licensed professional, he has always stayed on route and on schedule, performing the job of a city employee but without pay. He has never damaged any property or hurt anyone and has even attended transit worker union meetings – lobbying on behalf of union members for better pay and working conditions. For these crimes, McCollum has spent 23 years in maximum security prison.

“I want Darius to serve as an example of how broken the U.S. criminal justice system is – a system that has put a non-violent man in prison cumulatively longer than many convicted murderers,” Adam Irving, the film’s director, told The Mighty. Darius, whom Irving describes as “a gentle, considerate man,” has dealt with depression, childhood trauma, OCD and years of incarceration – including solitary confinement. “[He] fell through the cracks of a criminal justice system unable to rehabilitate him,” Irving said.

In addition to sharing McCollum’s story, Irving wants to show a more diverse side of autism. “Asperger’s is imagined as a suburban white disorder – not something affecting black urban youth,” he said. “I wanted ‘Off the Rails’ to dispel that myth. I wanted the ‘face’ of Asperger’s to be more inclusive.”

“I’d like viewers, especially New York judges, prosecutors and legislators to take action by helping Darius get out of the revolving door he’s been stuck in for 35 years,” Irving said. “He needs therapy, not more incarceration. He needs advocates. Darius doesn’t have the tools to help himself so the only way he’s going to lead a productive life… is for someone with the power to make change, step up to the plate and help him.”

Those interested in learning more about McCollum’s story can can watch “Off the Rails” on Sundance Now. 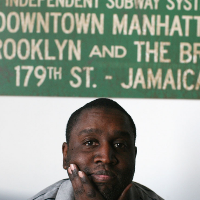