A Letter to the Koala That Bit Me (RE: The Revelation I Had About My Bipolar Disorder)

I don’t know if your name is really Bill. I’m trying to remember if your handler told me your name before she handed me the equivalent of a snarling cyclone of teeth with a hair trigger, but if she did, it escapes my memory. So let’s go with Bill. I’m not entirely sure the exact point of this letter, but I do know it’s not an indictment. I have forgiven you, Bill. I have forgiven you for biting me. On the ear.

I think it’s more than that, though. I think, by being honest, by publishing this trauma, by getting if off my shoulders and into the ether, I think I can forgive me, too. Because, let’s get real, Bill… the movie reel of my life contains some cringe-worthy moments, moments that bring me true regret and shame. But you know what? Maybe… maybe… I was just doing the best I could with the hand I was dealt. Maybe I don’t need to vilify myself anymore.

I think I’m writing this, Bill, because I forgive myself for being bipolar.

But let’s back up. It’s like I said, Bill. I have forgiven you, but that doesn’t absolve you of blame for the incident. I mean, I didn’t do anything wrong. I was just trying to do my part for wilderness conservation, just trying to donate my $15 to get a picture with a cuddly little koala. And what happened? What happened, Bill? I got bitten. You bit me. On the ear.

So, I’m not trying to make you feel bad, but I do think it’s important that you understood what I was going through when you decided to mince the sensitive cartilage and flesh which is my earlobe like hamburger meat. You see, I was having a rough time of it, Bill, a really rough time. I totally could have used an adorable photo opportunity of a picture-perfect moment with a loving little living stuffed animal, an animal l had always dreamed of seeing. And instead?

The ear, Bill. You bit me on the ear.

I was half a world away from everything I knew to be true when my bipolar disorder made itself known. I wasn’t doing well in the Land Down Under with no recourse for mental health treatment. I was alone, Bill, and sick, and stuck there for a whole semester. I was having issues.

As you might imagine, I didn’t know what was going on. I only knew I felt helpless, Bill, helpless and confused and so, so miserable. I don’t know if illnesses in the brain exist among marsupials, but if they do, you can surely empathize. And empathy was what I needed, Bill, someone to tell me I was not going crazy and it wouldn’t last forever and that everything would be OK. But instead?  I was viciously mauled, with nary a consideration for my deteriorating state of mind.

Let’s flesh this out a bit. (Get it, Bill?) Let’s flesh out what happened.

You smelled like Eucalyptus, first of all, and that endeared you to me. And then, Bill, after I had a accepted you from the random, clueless sheila working for the wildlife refuge, after she handed you to me, after you reached up your little face and snuffled my ear with your cold, wet nose… after all that, you opened your fangs and chomped down on my ear like a hungry, hungry hippo.

Your teeth weren’t sharp, Bill, not like I expected. They were flat, and strong, and they ground down on the tender meat of my earlobe with the pressure of a vice. I know you’re evolutionarily designed to eat leaves, so you’ve no need for sharp incisors; but the pressure was almost worse, as delicate tissue was crushed and blood flow immediately restricted to cells starving for oxygen. I’m not going to lie, Bill; it caused some damage. Sometimes, I relive the bite, waking from a sound sleep with a scream, clutching myself to reassure me I’m still intact. Clutching my ear.

But like I said, Bill, this letter isn’t an indictment, not of you, not of anyone. It’s not even an indictment of me, thought Lord knows, Bill, I have indicted myself for my own actions over and over again throughout the course of years of mania and depression. But I don’t think I’m to be blamed, Bill, any more than the lady with the conservation program who clearly had no knowledge about your capacity for carnage. Maybe I can finally be pardoned. Maybe my scar is a badge. My scar, Bill. On the ear.

They say times of intense stress lead you to learn who you really are. Do you know what I learned, Bill? I learned that I do have power, even in the midst of such a state of impotence. I have the ability to change my circumstances when I desire. I can will myself, not to a state where my dopamine and serotonin are at normal levels, but to a state where I recognize I need self-care. I can will myself to embrace that care, and to accept love from my support network. I can work, and try, and fight, and I can do it all even though my brain is fighting to do the opposite sometimes. Because I am not my bipolar disorder.

So, like I said, Bill, I’m not here to beat a dead marsupial. I guess I want some absolution, for us both. Because, you see, Bill, I’m doing much better now. Don’t get me wrong… it was a long road. It took years of willpower, of appointments, of tears and frustration. I had a lot more to learn, beyond that flash of insight as your molars clamped onto my body and refused to release. But I did learn, and I’m starting to attribute the catalyst for that life change to my life-changing bear attack.

I learned about mindfulness and trying to exist in the moment. I learned to ground myself. I learned to overcome the stigma of my diagnosis and the shame associated with medication; after all, I like to remind myself now, I am no different than someone with another illness. My medicine works in my brain, but it is no less life-saving. Now, I have a family who understands the psychological damage of a savage encounter with a wild animal, the consequences of barely having escaped with my life. Now, I’m at peace.

And you, Bill, I want you to be at peace as well. I want you to manage your temper. I want you to sublimate your rage. Maybe some koala-based cognitive behavioral therapy would benefit you, too, Bill, because I honestly worry that some other hapless, mentally-plagued girl will show up at the refuge and be subject to similar, Eucalyptus-scented wounds. I think you can beat it, Bill. I do.

Truly, I want nothing but the best for you. Thanks for the great story, I suppose, and the constant visual reminder of a tragic period in my early 20s. I’ll never forget you.

Share
or  Copy Link
Link copied to clipboard.
Be first
70 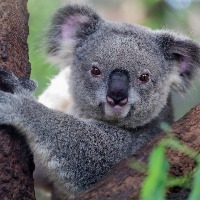