2016 might not have been “the worst year ever” for us as a society, but it was a terrible year for a lot of people, and it was a horrible year for me. And it’s OK to say so.

I am never going to condemn showing gratefulness or celebrating good things, the way so many of my friends are this time of year on social media. I’m glad you had a “good year overall,” got married, visited Paris, covered a presidential election, or had a baby. But it’s also valid (and not ungrateful or self-pitying) to look over the past year and say, actually, it was mostly bad for me.

I made one of those lists of things I was grateful for in 2016, too — but even focusing only on the good parts of my year, my year was still terrible, awful and no good overall. I believe there is a time to admit you’re not in a good season. Sometimes, the season can last all year. Sometimes, it can last two years (speaking from experience). I’ve found social media can provide a lot of pressure to pretend things are better than they are, and that can be incredibly isolating this time of year.

There are times when the best way to describe how I think people should treat one another comes from the Bible, and this is one of them. Romans 12 says we should weep with those who weep as well as rejoice with those who rejoice; I did a lot of weeping last year. This week, I’m doing a lot of weeping as I review what a terrible time I’ve had and how raw it all still feels even though I’ve put months between myself and what I can only pray is the worst of it.

Because I struggle with depression, I don’t always have the energy or motivation to pursue the good things. But my new year’s resolution is to pursue the good as well as I can, as often as I can — because I can’t control the bad things that might keep happening this year. But I can try to make my list of good things in 2017 longer than the bad. 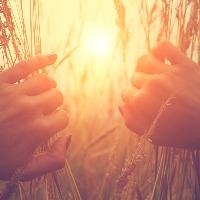