For me, watching Betsy DeVos at the confirmation hearing in January for her nomination as Secretary of Education seemed like witnessing a fish out of water, as what she expressed was inconsistent with our laws and educational terms.

She appeared not to know the Individuals with Disabilities Education Act (IDEA) is a federal law — one which ensures students with disabilities a right to an education tailored to his/her needs. This was a red flag for many of us who parent children with disabilities.

According to the National Center for Education Statistics:

I have a 9-year-old son among the 35 percent who have specific learning disabilities. Alex was born with Down syndrome, or trisomy 21, which is a chromosomal disorder resulting in an extra copy of the 21st chromosome. For Alex, the extra chromosome means he has an intellectual disability, which qualifies him for special education services.

Without a fight, and because of the federal regulations under IDEA, Alex began early intervention (EI) services at 3 months of age as covered under Part C of IDEA, which provides children with a developmental delay birth through age 2 with multidisciplinary therapies specific to the child’s needs.

You know the adage, “It takes a village to raise a child”? Well, I believe it can take a country to raise a child with special needs. The services and supports he receives both educationally and personally are significant. Alex qualifies for a modified curriculum in a public school setting supported by a special education teacher and classroom aides. In addition, he receives physical, occupational, speech and music therapy. Without the team of professionals tailoring his educational needs, he would not be succeeding in a public school setting.

So when I witnessed DeVos’ seeming lack of knowledge of a federal law that provides my child along with 6.5 million children receiving special education services, I didn’t only envision the logistical nightmare this might present to individual states if this wasn’t federally funded — I also felt my child was not seen.

To not be seen, valued or accepted can feel like discrimination. The sneaky thing about discrimination is the discriminator might not be aware of her bias, lack of understanding or polarized perspectives.

For a few weeks proceeding DeVos’ hearing, a surge of energy spread like wildfire. Many people made phone calls to representatives, sent emails or attended rallies imploring that Betsy DeVos not be voted in as the Secretary of Education. Yet, on February 7, 2017, DeVos was voted in with 51-50 vote.

And while I sit with my son Alex at the dining room table helping him with his homework, my throat tightens at the idea of how his school experience may change. Not just the fundamentals of schooling, because I am aware that with each new administration there are shifts. I’m mostly concerned that in this political era, there might be others who will not really see my son.

In my opinion, President Trump’s mockery of an individual with a disability on the campaign trail in 2016, coupled with the Secretary of Education’s seeming lack of awareness of federal laws supporting children with special needs, are examples of discrimination. Once we understand what we’re up against, I believe it becomes our work and duty to unify peacefully. But that doesn’t mean we have to speak quietly and raise our hands for permission.

For progress to happen, I believe we should make those calls to legislatures, sign those petitions and attend those rallies. These years ahead might be difficult and heart-wrenching, but I believe opportunity for true growth is right in front of us. 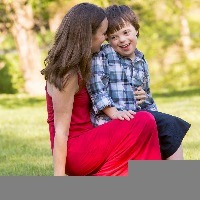