My Daughter's 'Summer of Serendipity' After a Spinal Cord Injury

My daughter Beth was 17 years old at the end of her junior year of high school. Three
years had passed since her spinal cord injury (C6-7) in May of 2000. The direction of her life was about to change — again. She led and I followed.

During therapy in the rehab pool, Beth had learned how to float. When she could barely swim the backstroke, she joined a team. To start the summer of 2003, Beth and I took turns driving from our small town in Ohio to Minneapolis for USA Swimming Disability Championships. She qualified for finals and earned her first S3 Paralympic American Record in the 200-meter backstroke. A year before, she had not been strong enough to swim nonstop for 200 meters.

On the open road again, heading east instead of west, we sang along with Beth’s CD mixes on the way to Baltimore to tour Johns Hopkins University. She had a short list of possible colleges with strong biology programs, all out of state. Before the accident, we had assumed she would go to college in Ohio.

Beth had planned for the week-long event in Connecticut. Hundreds of kids gathered from across the country. At the table tennis competition, she won several games after experimenting with a better way to grip the paddle. On a free day, we ate lunch at Mystic Pizza, surrounded by memorabilia from the 1988 movie with the same name. Beth bought “A Slice of Heaven” T-shirt and rated it the best pizza, ever. Equally exciting, we found the fifth Harry Potter book, “The Order of the Phoenix,” to add to her collection. Her happiness was contagious.

We sat on a picturesque waterfront on a flawless sunny afternoon. An easy traveler, Beth tilted her face upwards, closed her eyes, and smiled. I hugged her and she softly patted my back, a habit from her toddler days. In a clear moment, I understood that I no longer needed to worry about her future.

The day of the swim competition, wheelchairs crowded the pool deck. During Beth’s races, I walked alongside her on the deck. I pretended to be a coach by waving my arms, the signal to kick harder, to make her laugh. She couldn’t move her legs.

Junior Nationals ended with a dance in a packed ballroom, a place where no one was different and no one was the same. Beth danced carefree in her wheelchair in the middle of it all.

Before we drove home, my daughter requested a last-minute stop to a college not on her list of possibilities. “I toured the Harvard campus,” she said, “and just fell in love with it.”

I dropped Beth off at the Ohio Youth Leadership Forum for five parent-free days with other students with a disability. I thought she would be reluctant to request help and be frustrated. I was right about asking for help, but wrong about her response. For Beth, the forum was empowering and a big step towards independence. She said it was the best week of her life! I smiled, glad to hear it but sure that many others would be even better.

Beth was invited to a Canadian meet in August with the U.S. Paralympic National Team. She packed her brand-new passport. For our flight to Edmonton, Alberta, a clerk upgraded our tickets to first class, introducing us to warm hand towels and extra service on the eight-hour flight.

Competing with several S3 swimmers from other countries, Beth earned two silver and two bronze medals. After the meet, she was surprised to be named to the U.S. Paralympic National Swim Team — for the first time.

In a colorful summer scrapbook, Beth listed 15 notable firsts, including her first swim practice in the rain, her first concert without supervision, her first part-time job in an office, and her first tuna fish and cucumber sandwich. However, the very best was wheeling around Harvard, the college that would change Beth’s world. It was a summer of serendipity.

Share
or  Copy Link
Link copied to clipboard.
Be first
160 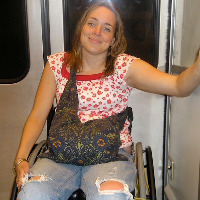