5 Things I Want Hollywood to Know About Mental Illness

Television doesn’t represent society as it is, but as the creators see it. This representation affects how the viewers see the world, as many tend to think TV is always faithful to reality. Because of this, mass media can either be a source of discrimination or a way to change our society. Let’s choose the latter and make TV representative of the world we want to live in.

It is difficult to represent mental illness because it happens inside someone’s head in many different ways. Those who haven’t struggled with a mental illness might be inspired by what they “know.” They might associate depression with extreme sadness, think anorexia is caused by a lack of confidence or compare schizophrenia to the serial killer they read about in the newspaper.

From someone who struggles with mental illness, this is what I want screenwriters, actors and directors to know:

1. Avoid a lack of diagnosis.

When a character thinks they are anxious or depressed, it is important to show them seeing a doctor and getting a diagnosis. This encourages seeking professional help and talking about what you are feeling.

A lack of diagnosis can make a character’s mental illness unclear. It is difficult for viewers to understand what anxiety is when they don’t know if the character is anxious, psychotic or simply stressed. It is important to name things or at least to name feelings to understand them. Some creators portray someone as having a mental illness by simply choosing random symptoms that appear to be interesting in the scenario, even though it doesn’t really make sense. Avoid doing this.

Before depicting someone who has a mental disorder, creators should do more research and ask for the help of a psychiatrist, talk to someone who has it or at least find relevant references about it online.

You won’t cure mental illness in a single episode. It can take months, years and sometimes, there isn’t ever a cure.

You won’t cure anorexia by convincing your friend she looks great. You can’t wake up one morning and decide not to feel depressed anymore. Your brother won’t stop being socially anxious if he just locks himself in his room. It is extremely difficult to get through it on your own. It is important to show there is no “easy solution” for mental illness.

3. Don’t shy away from showing medication and treatment.

Television presents a lot of misconceptions about medication and treatments. This can make it so many people with mental illness mistrust some of the options offered to help them.

On TV, medication is sometimes portrayed as an addiction that robs someone of their personality or makes them even sicker. Even if side effects vary from person to person, it is important to show that health care professionals want what’s best for a character.

If treatments, medication and psychiatrists were presented in a better way, many people could be encouraged to look for the help they need. Struggling with mental illness is certainly not an easy thing and it is essential to find ways to feel better, even if it can be quite a challenge.

4. Show your characters as more than their illnesses.

Don’t make someone the “depressed” one. Make them an interesting character, with qualities, flaws and passions who just so happens to be depressed. People with mental illness are much more than their disorder.

Screenwriters, directors and actors should get the chance to meet people with mental illnesses before representing them on a TV show. This person could tell them about how they deal with their disorder every day and still manage to be happy, even though it is in a different way. They are imperfect, just like everyone and can give good insight on creating a character we as viewers could fall in love with.

People experiencing psychosis are sometimes portrayed as dangerous criminals and serial killers. Even though it is possible for people with mental illness to be violent, only three to five percent of US crimes involve people with a mental illness.

Another serial killer with a mental illness won’t make your story more interesting, but it could make people fear mental illness and not talk about it because they don’t want to be judged. Why not try something different and make the hero challenge a mental disorder?

Television gives you a great opportunity to teach people about mental illness in the comfort of their own homes. They can meet beautifully imperfect characters who will give them a realistic example of what a mental disorder actually is. This can make give people the courage to talk about their feeling and get help. Television can save lives.

To screenwriters, actors and directors: you have a huge responsibility. Make sure you make the best of this opportunity. 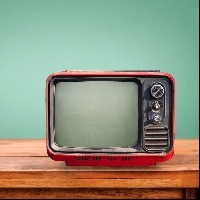