How I'm Shifting My Perspective on Dating With a Disability

Dating sucks. Period. I don’t think anyone actually enjoys it. The process can drain you. It’s physical, mental and even financial. We interact with others through a constant flow of information. The unceasing stream of data has revolutionized the way we share ourselves. We only require the desire and an internet connection, and our ideas, our hopes and our dreams can travel anywhere.

Technology can both help and hinder the dating process. Technology increases the potential for connection to previously impossible levels. Volume is good. The more you practice, the better you get at whatever you’re doing. At the same time, interpreting thoughts from a page becomes a complicated puzzle — unless I use deliberate language, I run a fairly high risk of being misunderstood. Volume and practice are great for learning skills, but I’m not convinced dating is supposed to work “by the numbers.” Sure, the more shots you take the more likely you are to hit the target, but is “target practice” the best mindset for finding a person to love?

When it comes to dating in general, everyone looks for something beyond interaction; we look for a connection with another human being. Whether or not you have a disability, human connection represents a shared goal. If you’ve ever used a dating app, you also know there’s a chasm between matching profiles and matching wavelengths. And as you may have already guessed, this all occurs before including the disability variable.

It’s important to stress the following:

Disability should not be a limiting factor — or even a stress-inducing consideration — in dating!

I focus on should not for a reason; knowing your situation does not define you does not mean it disappears. All humans judge. Digging yourself out of holes created by misconceptions other people create becomes an inevitable hurdle to overcome, beyond the regular nervousness associated with dating. Assuming it isn’t a blind date, you might have already dealt with some of these.

Having cerebral palsy, I know folks wonder about the various “logistical problems.” Yes, they usually mean sex. I once got asked “if everything worked right.” In hindsight, I wish I came up with a better answer than “Look, I think the best way to think of me from a physical perspective is as a guy sitting down,” but that’s the trial and error portion of things. Most of the time, these kinds of questions are heard through the grapevine. Hearing it directly caught me off guard the first time.

Nobody likes insensitive or outright rude questions, or wants to know beyond a doubt which judgments actively affect them. It’s easy to feel angry sometimes. The approach I have since adopted — though it takes practice, believe me — swallows the anger and treats such situations as teachable moments. Offensive comments, in my experience, largely originate from pure ignorance. A little education goes a long way. Who better than you to teach the subject of you?

When people know you have a disability, visible or otherwise, their perceptions and actions often change. Society conditions this response. Judgment happens instinctively in humans. I use a wheelchair every day and even I catch myself passing judgment on others. When I see another wheelchair user, my brain automatically thinks things like “Huh, I wonder if they’re having a tough time in this cold,” or “that’s too bad they’re struggling over those cobblestones.”

I make a conscious effort to recognize snap observations that represent negative judgments. However, if I inadvertently pass judgment, how can I blame others? It’s a daily struggle, whether we notice it or not. The situation just seems absolutely dire in the realm of dating because, like anyone else, we’re hoping to start something real.

I can’t claim great results (still single) but I have learned to change my dating mindset. Having changed my mental approach, I feel a lot better about the challenges. I simply realized I wasn’t doing anything “wrong.” It can be discouraging to go on dates that consistently don’t turn out the way you hope. Facing rejection doesn’t exactly make you want to “get back on that horse” every time, either.

After experiencing a few “ghosting” situations, I had a profound thought — in any situation, I am only half the equation. Any interaction with another person is a two-way street; my actions only count for half of the decision-making power. You can only meet the other person at 50 percent. It’s their choice to provide the other 50 percent… or not. Either way, it’s never all on you.

I believe when it comes to dating, no one is an expert. Anyone who tells you otherwise deludes themselves; this isn’t science, it’s pure living! Trial and error and a healthy amount of luck make dating what it is: often difficult and stressful, and it rarely feels like progress. Pain is bound to occur. But here’s the thing; the stuff you care about has the capability of hurting you the most.

Maybe you’re like me — you can’t dance as well as you want, a lot of bars feature high tops so you’re always literally drinking people under the table, and a crowded club is just an unpleasant sea of sweaty bums and smelly people. It sometimes feels like nobody sees you the way you want them to. It sucks, but what’s the alternative? You can sit at home thinking about all those negatives and feel pain just the same. If that’s the case, I’d rather go down swinging.

The only real failure is to give up completely. You never know if the next attempt is the one you need to succeed.

Share
or  Copy Link
Link copied to clipboard.
Be first
64 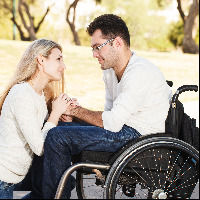