That 'Crazy' Woman on the Train... I Know Her

Editor’s Note: Name has been changed to respect privacy of the individual involved.

Just yesterday, I stumbled upon a YouTube video of what the user called a “crazy” woman on the New York City subway system. She yelled at people who sat near her, causing them to stay away from her. I had to do a double-take when watching.

I know her. That’s Kathy.

Four years ago, I experienced the worst breakdown of my life. My mind was saddled with the conviction that I was the Antichrist incarnate and that President Obama was Satan himself. I was admitted as an inpatient at one of New York City’s hospitals, where I remained for over two months. While I was there, Kathy was one of the other patients living on the unit.

At first, I was very frightened of her. Not because of any hostile act on her part, but due to an “intertwining” of our delusions. She spoke about how she knew people who were involved in the 9/11 attacks, indicating it was a conspiracy that involved the White House. She boasted about having a phone number that directly reached President Obama. Instantly I was spooked.

Perhaps after lunchtime that day, VH1 played the music video for that then-current hit by Carly Rae Jepsen, “Call Me Maybe.” The blood drained from my face. It had to be President Obama. He was telling me to call him.

Fraught with panic, I began crying publicly and whining for help. A nurse approached, reassuring me the phone number was a number readily available to the general populace. But my delusions were already triggered and I was inconsolable. Kathy perceived my actions as hostility and began cursing my presence whenever I walked near her. I felt destroyed and helpless and avoided her at all costs.

A few weeks passed as we gave one another the silent treatment. People came and went onto the unit, yet we both remained. After six weeks, our past resentments were forgotten and we became friendly acquaintances. Eating meals together, having silly conversations.

“I’m sorry about before. I get a bit passionate, you know. I didn’t mean it personally, I know you’re fine.” She had an incredibly warm smile.

We were discharged around the same time, so we traded phone numbers. A couple of months later, Kathy and I agreed to meet up at Central Park. It was a nice time, chatting idly amidst the summer air and green leaves. I became desperately parched without a dollar in my pocket, so she paid three dollars for me to get a Gatorade. I knew she could barely afford it and I promised to pay her back the next time we met. But we never did.

Almost four years later, now seeing this video with Kathy, I am reminded of how I first perceived her on the unit. She seemed threatening, unpredictable and dangerous. I was afraid of her. I wanted to get away from her. This was likely how the people on the subway felt. I might be assumptive here, but I think her aggression served as a barrier of protection. A way to keep people away so she doesn’t get taken advantage of.

Admittedly, it is difficult to discern on first glance whether aggressive behavior has the potential to evolve into physically dangerous altercations. Certainly, caution must be exercised. But why the hatred in the process? Why the stigma? Why do we have to demean others in order to maintain safety? Why do we have to look at people with disparaging eyes?

In my current work as a mental health peer specialist, I am faced with clients who become agitated at times. But I know them very well also. I realize outbursts are a blip in the road and the person will become calmer in a bit. Keeping this in mind, I remain optimistic and respectful. I am not afraid. And even in instances when the person does become dangerous, still I am not afraid. I fight past my fear by keeping positivity and unconditional concern in my heart.

Perhaps that is the core of it: Fear. We fear “crazy” people because they are perceived as unpredictable. Even though it is possible for us to not have fear affect us when we see those mentally afflicted, mainstream society has not learned the skill of “filtering out fear” as we react. Our reactions therefore are tinged with hatred, stigma and disdain. People with mental illness become an annoyance. They think we exhibit behaviors that need to be “corrected.” We are “broken,” so we must give up our autonomy so we can be “fixed.”

I believe education is the answer. Mental health is a concept that is as real as physical health. Surely, we know to wash our hands after using the bathroom. So too should mental hygiene be in the mainstream consciousness. Our tendencies towards prejudice and discrimination must be challenged because it is a matter of public health. When we are kinder and more understanding of one another, we are able to better understand and assist those who are struggling mentally. In the process, we realize we are not “curing” people, but rather, helping them.

This is my dream for the future. 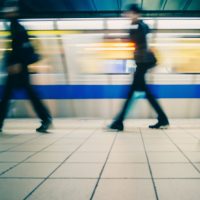