My name is Ian Adatia. I’m Professor of Pediatrics at the University of Alberta, and I’m Director of the Pediatric Pulmonary Hypertension Service at the Stollery Children’s Hospital in Edmonton, Alberta. We also provide a service to most of western Canada.

My interest in pulmonary hypertension began at Great Ormond Street in London, England with Glennis Haworth. Then I was lucky enough to work with David Wessel in Boston Children’s Hospital. Then I established a pulmonary hypertension clinic and service at Toronto Sick Children’s Hospital, where I was for 10 years. Then I moved to San Francisco and spent five great years there with Jeff Fineman then moved to Edmonton in 2008. Through the Pediatric Pulmonary Hypertension Network, we’re able to make sure that though that resource, that even children who are far away from a big center can get the best care. That their case can be discussed with colleagues, so that we can make sure that even if you live in a small town somewhere in western Canada that you can leverage through your pulmonary hypertension clinic, resources that are available to children living in big centers or big cities.

The key to going forward is a partnership with the families and the children to figure out the treatments that are available through networking and finding out which is the most appropriate for them. The pediatric guidelines was some initiative through I think Steve Abman and Stephen Archer. We’d been aware for a long time that there were guidelines for treating adults with pulmonary hypertension, but there was a gap in providing those – Finding recommendations for neonats, infants and children and adolescents with pulmonary hypertension and becomes especially important now that outcomes are improving. More and more children are being discharged to adult clinics that there needs to be some sort of background about how to care for them. That, especially for people who don’t see pulmonary hypertension on a regular basis, and even for those who do. Some documentation of the way that we manage them now so that we can really direct our attention to areas where we know the least to provide the research for the future and hopefully the future treatments.

Hopefully it will fulfill a niche for the person who occasionally sees a child with pulmonary hypertension and will know who to contact, the fundamental things to look for. Also for doctors who are quite experienced with the care of children with pulmonary hypertension, for them to understand the areas where we work with good evidence, medium-level evidence and areas where we need a lot more information.

There was a really collaborative effort. Really Steve Archer and Steve Abman probably had to work very hard to keep all these people focused and bring them together. They did a great job. I think almost everyone contributed to a number of areas. The areas that I was particularly interested in was the classification of pediatric pulmonary hypertension and pulmonary vascular disease. The intensive care area unit management, the association with congenital heart disease. The way that we investigate them with cardiac catheterization, and some aspects of neonatal management of pulmonary hypertension, especially diaphragmatic hernia. It was an effort of collaboration. Those were the areas that I was most interested in.

We wanted to be sure that children who have a problem with their heart that may lead to pulmonary hypertension were investigated appropriately, so that if they needed to have surgery, that decision was made appropriately and with the right investigations and safely for the child. We wanted to be sure that children having a cardiac catheter test, that that was done in a logical sequence and the safest possible way. We wanted to be sure that any children with pulmonary hypertension who were unfortunate enough to have to be on an intensive care unit, that we educated intensive care doctors about some of the difficulties and nuances, or some of the important aspects of looking after children with pulmonary hypertension that may be different from children with other reasons to be on the ICU, or the intensive care unit.

The idea of making the guidelines understandable to families and children is a great perception. I think we probably should have written the guidelines with a couple of paragraphs for families and patients. Maybe we should do that in the future. That guidelines for rare diseases should include a patient-oriented section that is a digest and easily understood by nonmedical practitioners. Having said that, I find with the internet, my patients and families are a huge resource and so knowledgeable about pulmonary vascular disease. I think that’s a wonderful thing about the age that we live in where knowledge is everybody’s.

We would like the children to live as normal a life as possible and look as normal as possible. When you see an active child, but they’ve got oxygen on, you can see they’re different. We need therapies that allow them to go to school and not appear different as well. That’s something that I didn’t really think about when I only see them in the clinic. You just accept that patients are in the hospital, so they carry things around them. There’s the stigma of their disease and of being treated as a patient. Most of their life is spent out of the hospital. We realize that we really want to be able to treat them so they don’t have to carry these stigma, if you like, of their disease around with them. 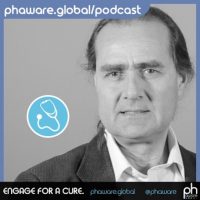