The Essential Lessons Blind Children Can't Get in the Classroom

I was asked by CAPVI (California Association for Parents of Children with Visual Impairments) to help deal with an Orientation and Mobility issue. There is a school district that is not letting the Orientation and Mobility instructors take their elementary students more than two blocks from the school. They are also preventing the instructors for middle and high school students from working with their students outside of school hours.

After writing the letter, I realized I wanted to send it to a bigger audience than just the school district involved. I wanted to acknowledge how much of Jacob’s success as an adult is a result of the Orientation and Mobility instruction he received during his school career, and how grateful I am to the programs and individuals that provided it. His O and M folks and his teachers were all part of the village that got Jacob to where he is now. I am indebted to all of them.

To Whom it May Concern:

I am Judith Lesner, the mother of Jacob Lesner-Buxton. Jacob has cortical visual impairment, nystagmus, amblyopia, mixed athetoid/spastic diplegic cerebral palsy which affects his speech as well as fine and gross motor movement. He also has Asperger’s syndrome. He is now 33 and has a B.A. in Social Work from California State University, Monterey as well as a MSW from California State University, East Bay. After being raised in Oakland, he now lives in Santa Barbara where he has a full time job as a Community Organizer with the Tri-County Independent Living Resource Center. He has been working there for over three years.

At the present time he shares an apartment with another man. He has been living on his own for most of the time since he graduated from high school. His main limitation now is that he cannot drive. Although he is a Regional Center Client, the only assistance he is presently receiving is someone to take him shopping in a car once a week. Part of his job involves traveling to the organization’s satellite offices as well as conferences and meetings. Most of this is done by city buses, regional buses and vans, Amtrak and Greyhound.

I attribute most of his independence to the Orientation and Mobility Training he received from the Oakland United School District’s Visually Impaired Program and from his one year of O and M at the California School for the Blind. It started in pre-school with walks to the grocery store, and then he progressed to more and more field trips to get him out into the community. At the California School for the Blind, he was taught to shop independently at a small mall after being dropped off by the school’s shuttle. This was done after the regular school day was completed.

From the time he entered middle school, all of his O and M lessons were after school. This allowed him to have longer lessons and not miss any of the regular academic day. They included lessons on city buses, the BART system and trips to the Oakland Airport. Lessons also included trips to San Francisco and to department stores to learn about clothes shopping. There was no way he could have had these experiences during the school day and still fulfilled his rigorous academic schedule.

Besides the Orientation and Mobility skills, he learned social skills needed to be part of the community, as well as time and money skills. Most importantly, he gained confidence in his ability to engage in various activities in the community. I do not believe that these skills can be learned in the vacuum of the school building, or even the few blocks around the school. Students need to stretch and extend their skills and confidence in real life situations.

Jacob is not only successful in getting around for his job, but has traveled extensively abroad. He has been to Russia (including Siberia), Cuba, Mexico (Chiapas) and Japan with various groups. He was able to walk around Moscow on his own because of the confidence gained in his previous experiences.

I think it is imperative that students who are visually impaired or blind gain as much experience in the community as possible from a very early age. The extensive training in Orientation and Mobility needed to make someone a competent traveler takes many hours. I believe students need to have access to the community from preschool on. For many students the training, they need must be done after the school day to avoid impinging on their academic schedule.

I write this as the parent of a son with low vision and many additional disabilities who is a confident and competent traveler, both in his own community and the world. Since I am witness to his success, it is my utmost desire to see that other students receive the same opportunities he did to be able to explore and expand his world. 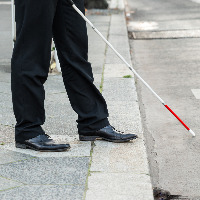